The space at 210 E. Evergreen Ave. that was to be used for the driveway. (Photo by Kevin Dicciani) by Kevin Dicciani The board of the Chestnut Hill Community Association voted unanimously at its … 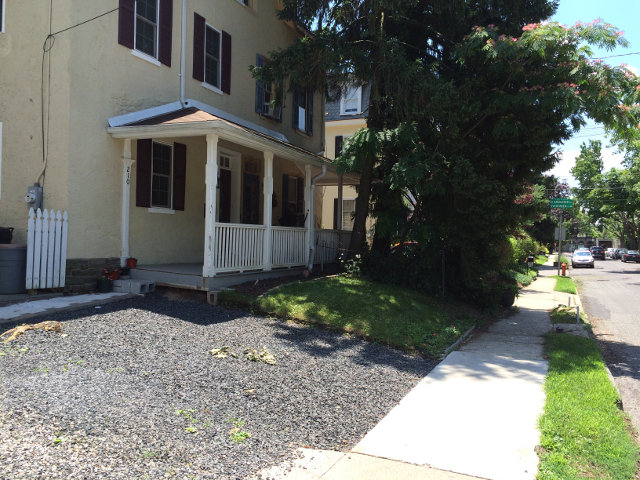 The space at 210 E. Evergreen Ave. that was to be used for the driveway. (Photo by Kevin Dicciani)

The board of the Chestnut Hill Community Association voted unanimously at its August meeting to appeal a driveway variance at 210 E. Evergreen Ave. after the Zoning Board of Adjustment ruled earlier this month in the property owner's favor.

The variance was originally presented to the Land Use Planning and Zoning committee in June by homeowners Jonathan and Lindsay Berardino, who moved to 210 E. Evergreen Avenue in 2011. The Berardino's told the LUPZ that they began installing a single-car driveway on the front of their property under the presumption that they would be able to do so without paperwork. The couple got as far as digging out a space for the driveway when a neighbor told them they needed to get their project approved by the various committees within the neighborhood.

The couple then delayed the project, laid down gravel, filled out the proper paperwork and brought their variance, along with signatures from nearby neighbors who supported their project, to present to the LUPZ. The LUPZ voted unanimously to not support the variance, with a few of its committee members calling the driveway “a parking pad.”

Because the required front yard setback zone is 8 feet, and the zone on the Berardino's property is only 7 feet, 9 inches, the LUPZ ruled that there would not be enough space to allow the rear of the car to be parked behind the front of the house. Having a driveway in that position would obstruct the sidewalk and also eliminate green space, something the LUPZ said it has always strongly opposed.

LUPZ then asked the Berardino's if they could somehow construct the driveway to run along the side of the house to the back, where they could possibly build a garage as well, but Jonathan Berardino explained that they didn't have enough funds to expand the project in that manner. The Berardino's were told to come up with alternative plans before presenting to the Development Review Committee later that month.

The Berardino's variance was then rejected unanimously by the DRC, which found that the driveway would “intrude in an area that they would like to preserve as more pedestrian friendly.” Additionally, the DRC said, to allow its construction would set a precedent within the community that would “completely change the [neighborhood's] character over time.”

But on Aug. 3 the ZBA voted to support the variance for the driveway. Larry McEwen, the vice president of the physical division, said the CHCA was left with two options: either let the issue go, or appeal the decision.

McEwen described at the Aug. 27 CHCA meeting what the board would have to do to appeal the decision. The case would go to the Court of Common Pleas, likely beginning in three months, he said, during which time the board would have to work with an attorney. All in all the process would take about 40 hours and would cost somewhere between $15-and-$20,000.

McEwen said, should the board chose to not appeal the decision, a precedent would be set within a neighborhood that is already in dire need of parking. He said the ZBA ruling to support the driveway has a “potentially empowering impact,” one that may allow other residents to believe they are able construct similar parking spaces.

Board member Richard Snowden said if others in the neighborhood decide to follow the Berardino's lead and build driveways on the fronts of their properties, it would “change the Historic District permanently.”

Snowden also said the ZBA's ruling elucidates a disconnect between the CHCA and the City of Philadelphia. He said by not adhering to the CHCA's processes or the way it conducts its business, the ZBA is undercutting the independence and standards in which the board and its committees operate. The only option for the CHCA, then, would be to appeal every decision made outside and against the community.

“I think this is a tremendous erosion of our ability to do business with the city of Philadelphia and get our point across,” Snowden said. “That tells me that we should be spending funds, if necessary, to make it very clear to a property owner who wants to pull something like this: 'You're going to buy that driveway with legal fees.'”

Until the CHCA and the city establish an open dialogue and work together, Snowden said “the city will be beset by these kinds of suits out of Chestnut Hill every time they gratuitously ignore our process.”

“We're defending what to me is the essence of the historic society,” he said.

Board member Mark Keintz asked the board what would be the ultimate goal of appealing the driveway variance.

“The goal would be to make it very clear that if you're going to do something like this, it's going to be very costly,” Snowden said.

Where the funds will come from to pay for the appeal has yet to be determined. Snowden said the CHCA could use the reserve fund, go to the Chestnut Hill Community Fund, or possibly work to collectively raise the funds with neighbors and various organizations throughout the community, such as the Chestnut Hill Historical Society.

McEwen stressed the need to take a firm stance on issues that threaten the history of the neighborhood, no matter how minuscule they may seem.

“It looks like a fairly small issue, but it's actually in the public open space,” McEwen said. “To me it's an important part of the historic fabric, and it's something that could be repeated, and, if repeated, could make a big change to the neighborhood.”

Board and LUPZ member Joyce Lenhardt said it's not a small issue, but a big issue, as it's “an erosion of what's really important” in the community. Moreover, she said, the issue extends further than just this one driveway.

“This is not just something that happened to come before us at this time,” Lenhardt said. “It's something we've been opposed to from the beginning, and I think it's a really important point for us to continue to fight.”

The board voted 19-0 to approve the filing of an appeal to the ZBA's decision, with details of the representation and funding to be discussed at September's Executive Committee meeting.

The board voted unanimously to support a residential zoning variance request for 8514 Ardleigh Street.

The variance concerns a rear addition to the property, where currently the existing building is over the setback requirement by 10 inches, as are all the buildings in the rear on that street.

The proposal is to build that structure down to the first floor, which would increase the usability of the house, and add a space for the car to park under the house, as was originally intended. Larry McEwen, vice president of the physical division, said the existing condition is not being further encroached upon, the work is minimal, and it is aesthetically pleasing.

The board voted 19-0 to support the variance.