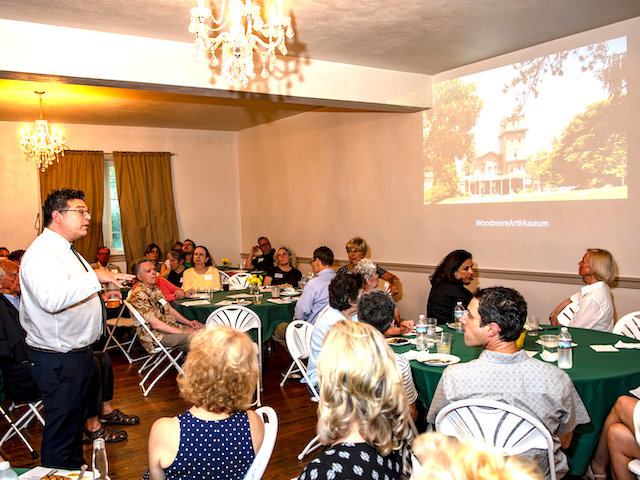 Looking back on nearly a decade spent at Woodmere, Valerio highlighted the efforts that he and his staff have made to strengthen the outer areas of the museum. Thinking back to when he first arrived at Woodmere in 2010, Valerio recalled how one of the most frequent comments he received was about how passerby could not tell what exactly the museum was just by glancing at it from the outside. Recognizing an opportunity, he became dedicated to utilizing the outdoor space of the museum’s property to its advantage.

Some of the other initiatives the museum took under Valerio include bringing a Harry Bertoia sculpture that had been stowed away in West Philadelphia by the city, managing stormwater through adding permeable parking surfaces and step pools, adding a hedge with local plants that feed local birds and the installation of the “White Water” sculpture that arrived this past March. The Bertoia sculpture was a notable highlight for Valerio, as he cited it as the first major transformation of the outdoor space, leading to its distinctions as a selfie spot for visitors and “the world’s biggest bird bath.”

Looking ahead, Valerio is hoping to focus his efforts on improving the trees on Woodmere’s property, as the museum’s landscape has not been properly tended to in several decades. Though there are plenty of dead trees in the vicinity, he subscribes to the idea that a tree’s usefulness does not end after it dies. One idea he mentioned involved cutting the top off of a tree and turning it into a “snag,” which would allow for other uses, such as carving a sculpture or creating a home for small animals. Another involves gathering loose tree stumps and other parts of dead trees and putting them together in a garden called a stumpery.

Another highlight of the meeting was the presentation of three community awards: the Chestnut Hill Award, the Meritorious Service Award and the Benefactor’s Award. The Chestnut Hill Award was presented to the Widener, Dixon and McCausland families, Natural Lands Trust and Whitemarsh Foundation for the preservation of Erdenheim Farm. With preservation becoming more important as development increases in the immediate area, the CHCA recognized the efforts of multiple families and foundations coming together to help maintain this stretch of 450 acres, which has remained west of the Wissahickon Creek for over 250 years.

Julie Byrne received the Meritorious Service Award for her work as chairperson of the Pastorius Park Concert Series. Byrne’s involvement with the concerts since 2004 has been marked by an engaging leadership style and a desire to involve everyone in a full range of activities.

“If you talk to people in the neighborhood, most of them will give you a story about a night at the concerts,” Byrne said. “I’ve always considered it an honor to work on the Pastorius Park concerts. It’s such an institution in Chestnut Hill.”

Lastly, the Benefactor’s Award was presented to the estate of James A. Black, Jr. Though Black died in late 2016, he left behind a donation of $200,000 to the Chestnut Hill Tree Fund, which will allow the CHCA to plant new trees and maintain the grounds of various areas throughout the neighborhood for years to come. A 2011 recipient of the CHCA’s Distinguished Service Award, Black was known during his life for his love of trees, something that will live on for years thanks to his donation.

Additionally, the CHCA, Chestnut Hill Local and Chestnut Hill Community Fund all looked back on the previous year with their Annual Summary reports. Laura Lucas, president of the CHCA Board of Directors, commended the CHCA on the accomplishment of another “relatively quiet year while recalling notable events such as last month’s Meet the Candidates forum and the adoption of the Upper Northwest District Plan for the Philadelphia2035 initiative.

For the Local, Bob Warner, former president and current member of the paper’s Board of Directors recounted the hiring of current publisher John Derr, the Local’s redesign and looked ahead to new growth initiatives that will be assisted by a line of credit that is currently being finalized.

On the side of the Community Fund, Susan Bray cited the group conducting its annual financial review, managing $756,000 in funds, maintaining the Town Hall building, gaining two new trustees and working with the Local to establish the credit line as notable accomplishments in a successful year.

The next CHCA Board of Directors meeting is set for Thursday, July 25 at 7 p.m. Brendan Sample can be reached at brendan@chestnuthilllocal.com or 215-248-8819.

Chestnut Hill resident stars in classic on Mt. Airy stage
Marielle Issa, who is playing the iconic Jo March in Quintessence Theatre's “Little Women, The Broadway Musical,” is proud to be a Chestnut Hiller, a Germantown Friends School alumna and a first-generation Arab-American.

Holiday dressing, Chestnut Hill style
Whether you celebrate the holidays at black tie soirees with Champagne or in fuzzy pajamas with a mug of hot chocolate, the distinctive clothing shops of Chestnut Hill have just what you need for yourself and those lucky people on your gift list.