An architect's rendering of the proposed two-story structure to be built at 2 E. Chestnut Hill Ave. by Kevin Dicciani The board of the Chestnut Hill Community Association voted on May 26 to support … 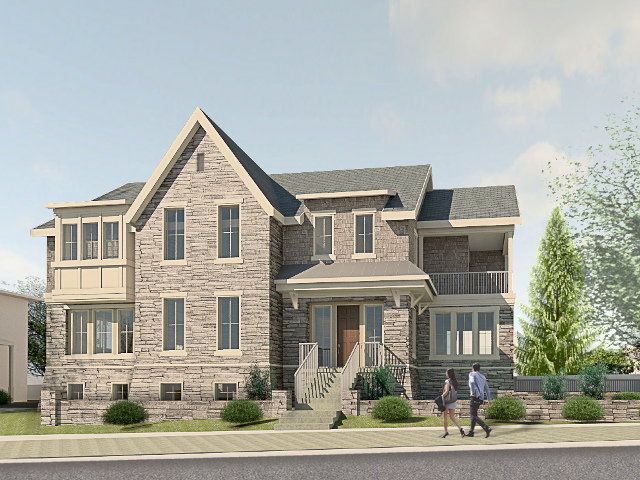 An architect's rendering of the proposed two-story structure to be built at 2 E. Chestnut Hill Ave.

The board of the Chestnut Hill Community Association voted on May 26 to support two projects — Woodmere Art Museum’s stormwater management system and the development of 2 E. Chestnut Hill Ave.

Larry McEwen, vice president of the physical division, introduced a motion to support a variance required by Woodmere to install a new stormwater management system on its property at 9201 Germantown Ave.

The $1.5 million project at Woodmere contains three elements: The first is the installation of monumental sculptures on its property; the second is replacing the existing parking lot with a porous surface as well as lowering its grade and installing new LED lighting; and the third pertains to the installation of an infiltration facility, underground water tanks, a bioswale, and a new stormwater sewer – all of which are to aid with stormwater runoff.

The project initially received a refusal from Philadelphia’s Department of Licenses and Inspections due to the steepness of slope in the area east of the parking lot. Nearby neighbors have been supportive of the plan.

The motion passed with a unanimous vote.

The next motion concerned Patriot Real Estate’s plans to restore and convert the former Gallagher Dentistry Office into a two-unit home and build an additional two-story, single-family structure on the site.

The developer faces three variance refusals from the Department of Licenses and Inspections. The refusals involve encroachment on the front yard setback, multifamily living on the same lot, and change of use, from residential single-family detached to residential multifamily.

Patriot Real Estate and Harman Deutsch Architecture have revised the project multiple times over the course of the past few months in response to concerns of nearby residents. The developers have decreased the amount of units in the new structure from two to one, and they have lowered its height and moved it closer to Germantown Avenue, farther away from a nearby neighbor’s property. Previously, parking stalls were going to be constructed alongside the new structure, but the developer’s have revised that plan to include interior parking within the building to accommodate all three units on the property.

Carl Primavera, attorney for Patriot Real Estate, said that, in terms of density, the site will be the slimmest its ever been, dating back to when the existing building was used as a dentist’s office.

“Originally the zoning board approved the dental office’s offer to have a maximum of 21 people inside the building at any one time, with the parking lot,” Primavera said. “This proposal, especially as revised, is bringing us much more into conformity than this property has been since time immemorial.”

Last week the CHCA’s Development Review Committee voted to support the project, but recommended that the developer consider a landscaping plan to increase the privacy between the new structure and a nearby neighbor’s property. The Historic District Advisory Committee also asked the developers to pursue a preservation easement on the existing building, considered historically significant on the National Register, and to consult the committee if they were planning on doing any work on its exterior.

Patricia Cove, a DRC member and the vice president of preservation for the Chestnut Hill Historical Society, said the developers have agreed to pursue a preservation easement on the existing building and work with the CHHS if they planned any modifications.

“We found the developer to be extremely interested in addressing all of the concerns that the historical society had,” Cove said. “For these reasons and for also continuing to work with us, the Historic District Advisory Committee did vote unanimously to support this project.”

Lori Salganicoff, executive director of the CHHS, said that part of the reason the committee supports the project is because of “the developer’s dedication to preserving the existing building.”

Throughout the entire process of getting support for the variances, nearby neighbors Agnes and David Richardson have opposed the project. They said the mass and density of the new structure was too much for the site, and that it would decrease open space and invade their privacy. They also had issues with the shadows the structure would cast on their backyard and sunroom, which the developer’s studies have shown would be most dramatic during winter afternoons.

Agnes Richardson asked the CHCA “to please not support the variances, with the exception of multifamily use in the existing building.”

“The intensity of the development is, I believe, fundamentally inconsistent with the character of our street,” Richardson said. “Commercial development would negatively and permanently impact our street.”

Primavera said that he found the Richardson’s opposition to be “ungenerous.” He said that Patriot Real Estate has tried to condense the density as best as they could through multiple revisions to the project.

“Anything that could be done has been done to mitigate these problems,” Primavera said.

In terms of privacy, Primavera said the office of David Richardson’s business, D.O. Richardson and Associates, is right next door at 8-10 E. Chestnut Hill Ave. As such, Primavera said that he hopes his “residents’ privacy is respected the way we’re respecting the privacy of the neighbors and the employees.”

David Richardson said that in 1993 when he tried to get “one minor variance” approved concerning usage on his lot for commercial purposes, there was “this great controversy.” He said now there doesn’t seem to be any controversy on the part of the CHCA over three different variances.

“I find it offensive, actually, that there isn’t more controversy over a much bigger development and three different variances,” Richardson said. “I would like to see the same standards apply here. That’s all.”

McEwen said that he can’t speak for the committees work done in 1993, but today they judge each issue on its own merits.

“At this moment in time, the presentation that was made to us and the revisions we’ve asked for, in addition to where it stands now, I think everybody is very happy that the existing building is being maintained,” McEwen said.

He then went on to say that the various committees have done their best to address the issues of both the developer and the Richardson’s while keeping in mind what is best for Chestnut Hill overall. As an example, McEwen said that Patriot Real Estate has expressed their plan to increase privacy between the two properties through planting and landscaping schemes.

“But the other recommendation, as part of the proposal made at the DRC meeting, was to have a robust planting scheme for the property between the new structure and the neighbor’s property to try address privacy and screen the structure, just to create a separation for both parties,” McEwen said. “This is something the developer has indicated a willingness to continue to look at and work with the neighbor’s on.”

Laura Lucas, president of the CHCA, said these issues are never taken lightly by the CHCA or the various committees. She said they try to create a forum for all the parties involved so that the best outcome is reached, although the task of appeasing everyone is never easy.

“With projects like these, there is always the potential that everyone’s not going to be satisfied,” Lucas said. “It’s the give and the take.”

The vote passed with one objection.