CHC students travel to Africa to ‘serve their neighbor’

CHC sophomore Alexandra McCown visits with a young student after serving food to the children during the Saturday feeding program at St. Martin's School. …

CHC students travel to Africa to ‘serve their neighbor’ 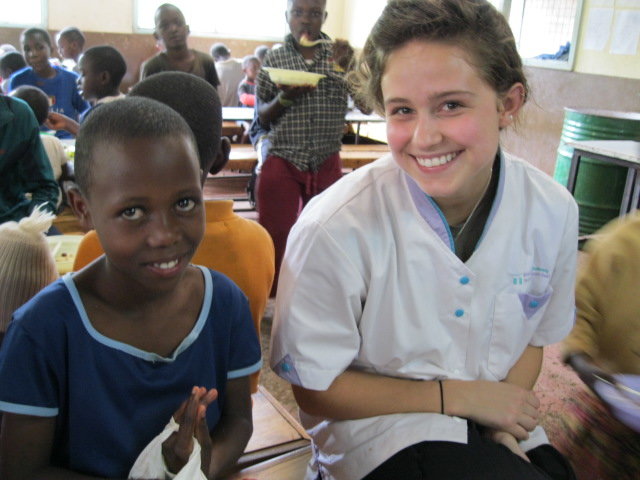 CHC sophomore Alexandra McCown visits with a young student after serving food to the children during the Saturday feeding program at St. Martin's School. (http://www.saintmartinskenya.com/how-to-help)

Madison Coyne, 23, a senior at Chestnut Hill College, said last week that when she was on her way to Kenya, East Africa, in May of this year, she worried that her service wouldn't have an impact. “As we flew into Nairobi, I told myself that 'sometimes just a smile is a service in itself,'” the Cheltenham resident said.

The special education and Spanish major showed me a necklace a woman at the Maasai market gave her. “It's actually made up of 35 strands of beads and a metal plate,” she said. “We were talking, and I was telling her about the service trip I was on. We were talking about my goals in life, and she told me 'I want you to have this.'”

Coyne said her last service project in Kenya was at the Saint Francis Hospital within the compound where they stayed. “I taught women how to clean umbilical cords, how to breastfeed and change diapers,” she said. “I assisted in an exam of a pregnant girl and helped with a natural birth, two cesarean births and even the naming of a newborn baby girl. I am honestly not sure if they impacted me more or I impacted them more. I can say that in my heart I feel as if I learned to love better, smile more and laugh harder.”

Six Chestnut Hill College students and Dr. Jacqueline Reich, associate professor of political science at the college, traveled to Kenya in May and stayed for three weeks as part of the African Sisters Education Collaborative (ASEC), of which Chestnut Hill College and the Sisters of St. Joseph are founding members, to take part in several service projects.

ASEC's mission is to “facilitate access to education for women religious in Africa that leads to enhancement and expansion of the education, health, economic, social, environmental and spiritual services they provide.”

Marywood University, another founding member, also sent two students. The eight students, Dr. Reich and Jennifer Mudge, a licensed social worker and new program evaluator for the Sisters Leadership Initiative at ASEC, stayed on the Little Sisters of Saint Francis' compound, where they assisted the sisters at a hospital, refugee center, center for HIV/AIDS patients and their caregivers and a center for street boys.

The students who participated in the service trip were part of a Global Studies course, “Kenya and Africa in a Globalizing World,” taught by Dr. Reich. Dr. Margaret Gannon, a professor at Marywood University in Scranton, taught a similar course at Marywood. In the past, CHC students traveled to Tanzania, where they taught English to students in a rural school. Since Kenya is a former British colony, most residents already know English, so tutoring is not a pressing need.

In addition to learning about the history and culture of Kenya, students also learned some Swahili. At a recent presentation discussing their service trip in May, Madison Coyne welcomed attendees by saying “Habari,” which means “Hello.”

“I was born in a beautiful country (Honduras) with its poverty, corruption and violence much like Kenya,” said Iris Reyes-Bugg, a communications major, in an earlier interview with the CHC Magazine. “I was born with very little, and look at me now, attending a private Catholic college. I feel that by going on this service trip I will have an opportunity to give back and to say thank you for all that I have.”

Shaquita Grier, a chemistry major who graduated from CHC in May, said the trip made her realize how much Americans take for granted “the fact that we can just turn on the faucet and have access to clean water. The fact that I had to brush my teeth out of a one-liter bottle for two weeks and worry about running out of clean water was an eye-opener. When we traveled, we always carried many bottles of water with us. It was very difficult to get clean drinking water off the compound.”

Grier said it's amazing to think that the cost of a Starbucks coffee could send a child in Kenya to school. “We blow through $5 like it's nothing,” the West Oak Lane resident said. “Five dollars is enough to send a child to school and get them the supplies they need. I am actually sending one of my laptops to them for school.”

One of the things that stunned Grier was the fact that many children didn't know what they looked like. “Many of the children had never seen a picture of themselves in the mirror or on a cell phone,” she said. “That is something that shocked me. When you have to point to a child in a mirror or cell phone and say, 'That's you.' The little things that are important we don't see as important. Just like you don't think to speak to someone you don't know. You don't realize how simply saying 'Hello' helps to build a relationship. When you say 'Hello,' it puts people at ease because you are no longer a stranger ... you are a friend. The trip taught me how to serve and be a dear neighbor.”

The trip was not all work and no play. The students visited an animal reserve in the southern part of the city, where they were able to feed giraffes. They also visited an elephant orphanage established after a synthetic version of elephant milk was invented a few years ago, saving countless infant elephants whose mothers had died either of natural causes or as victims of poachers.