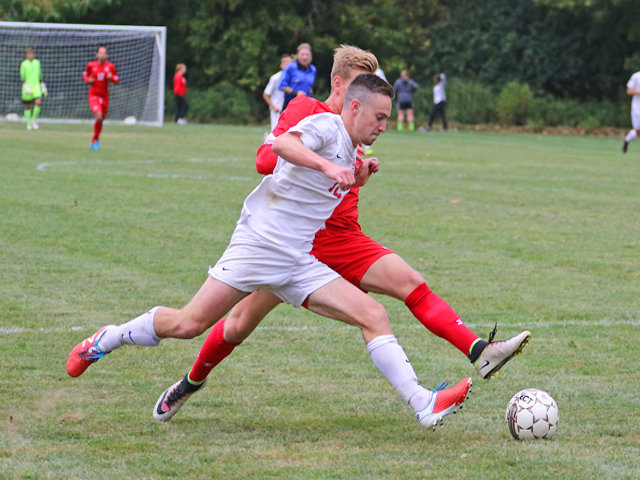 When Chestnut Hill College hosted New York's Nyack College for a men's and women's soccer doubleheader last Saturday afternoon, all four teams involved were definitely in need of a win. At the end of the day, each school had achieved half of its objectives.

With a goal late in the second half of the first match, the Nyack women defeated CHC, 2-1, for their first win in or out of conference play. They improved to 1-5 within the Central Atlantic Collegiate Conference and 1-10 overall, while Chestnut Hill came away with an identical CACC record and slipped to 1-8 against all opponents.

The men's teams were both 2-3 in the conference as the second of Saturday's games got underway. Riding a 2-1 lead from the first half most of the way through the second period, the male Griffins of CHC added an insurance goal with around eight minutes remaining. The 3-1 decision got them back to .500 in the CACC and to 4-6 overall, while the Nyack Warriors departed with marks of 2-4, 4-5-1.

Another winner was the cause of cancer research, as Chestnut Hill designated the doubleheader as a fundraiser to benefit the soccer-related organization, Red Card Cancer. On top of that, Saturday was Senior Day for the men's and women's teams.

While the hot weather that stifled the area just a few days earlier seemed to come straight from the middle of August, Saturday's conditions were more reminiscent of mid-October, with alternating sun and clouds, gusts of wind and temperatures ranging through the 60's.

Save for the clock, the scoreboard didn't budge for more than half-an-hour in the women's match, then with 7:34 remaining in the first period Anna-Maria Vandyk gave Nyack's Lady Warriors the early edge. Just over two minutes later, Griffins sophomore Geena DiRugeris made a run right through the middle and tied the game.

Both teams had chances to net a go-ahead goal in the opening minutes of the second half. Chestnut Hill got off several headers in the box, including a near miss by Julianna Casasanto, a Penn Charter graduate who was one of the CHC seniors recognized prior to the start of the game.

With two dozen minutes remaining, Nyack sent a strong shot high and wide of the Griffins' cage. Seven minutes later, Chestnut Hill had a couple of chances on a corner kick and then a re-feed into the box, but the threat ended when Nyack goalie Greta Enloe grabbed the ball and held it.

In the last 15 minutes, the Warriors increasingly controlled the play, seeking their first win of the season. Several corners came to naught, and Nyack sent two shots from the left flank into the outside of the left net panel. 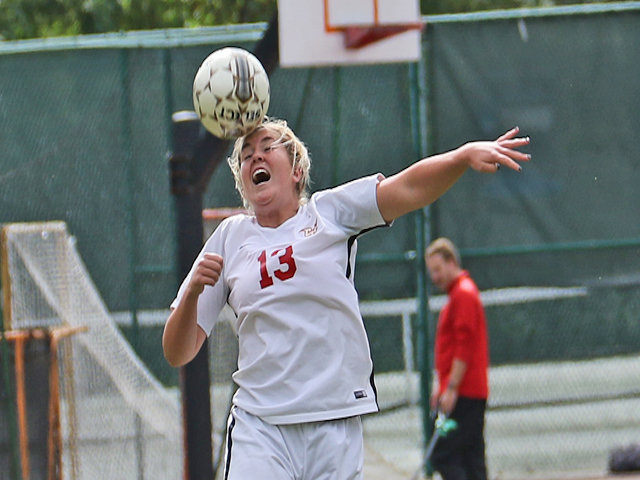 From just a few yards inside the midfield stripe, the visitors' Avery Chance solidly struck a serve toward the mouth of the Griffins' goal. The ball took a high bounce inside the box, but nobody got a touch on it as it eluded CHC senior keeper Meghan Guagenti (eight saves) and made its way into the cage.

There were still eight-and-a-half minutes left to play, but the home team seemed listless in the closing stages. Nyack emerged with a 2-1 win after accumulating a 33-14 advantage in total shots.

By way of contrast, the Chestnut Hill men took charge of their contest right from the start. There were some off-target shots from the outside by the Griffins, but when they did register their first goal, it was from close range.

CHC sophomore Paris Bruhn booted the ball across the front of the goal from the left, and senior Mike Buscemi, who had closed in at the right post, now engaged in a battle of quick reflexes with Nyack goalie Alvaro Magel.

The Griffins had gotten the early edge with just over 15 minutes elapsed. Their second goal, with 9:38 left in the period, was produced in a more straightforward manner. Carrying the ball up the right wing from near midfield, Chestnut Hill senior Joe Casaletto beat a defender who had dashed back to stop him, and fired past Magel.

With 5:41 to go, Francois Legoedec deposited what would be the Warriors' lone goal of the game, and the 2-1 tally held up until halftime. Late in the final minute the Griffins thought they'd scored a third goal courtesy of senior Zachary Gray, but he was ruled offsides when he shot the ball.

In the second minute of the second half Nyack lifted the ball over the CHC crossbar on a direct kick. The Warriors kept the pressure on, putting together some of their best offensive sequences of the game. They couldn't make another dent on the scoreboard, though, and eventually the momentum began to change.

With nine minutes left to play Tom McHale, a freshman out of Wissahickon High School, fired high on a shot from outside the middle of the 18-yard-line. Off of the Warriors' six-yard kick the Griffins quickly regained possession and came back up the field. Gray was charging in from the right once more, and when Nyack's Magel got a piece of his shot, freshman Miguel Mara was in position to knock in the rebound with 8:14 remaining.

CHC's Caseletto almost netted a second goal in the closing minutes, but he got a little too much air under the ball. With a minute left Nyack had a chance to at least make it a one-goal contest, but on a Warrior corner kick from the right the ball was caught at the far post by Griffins goalie Frank Maniscalco. A sophomore and a St. Joe's Prep grad, Maniscalco finished with five saves. The winners wound up with a 21-16 edge in the shooting column.