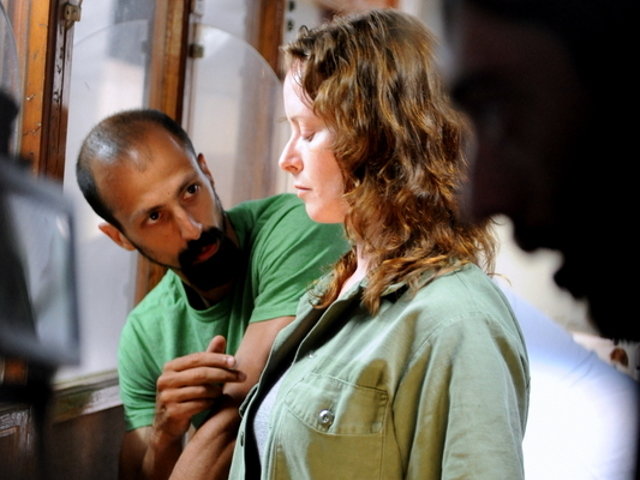 Neal Dhand MFA, 33, assistant professor of communication at Chestnut Hill College as well as a filmmaker, saw a dream come true last month when his new feature film, “Crooked & Narrow,” was selected and screened by the Brooklyn Film Festival (BFF), where it won the “Best Editing Award.” (BFF is an international and highly competitive festival that aims to advance public interest in films and the independent production of films.)

“I was excited to premiere ‘Crooked & Narrow’ at the Brooklyn Film Festival and thrilled to be in such great company,” said Dhand, now a South Philly resident. “Brooklyn is a fantastic launching pad for the movie as it heads out into the world.”

Dhand, who grew up in Abington and attended St. Joseph’s Prep, is a writer, director and producer. The child of two physicians, his 2012 directorial debut, “Second-Story Man”, premiered at Cinequest 21 and screened at festivals in Shanghai, Marbella and around the U.S. He is currently in development on the sci-fi thrillers “Zippers” and “The Lighthouse.” At Chestnut Hill College Dhand teaches screenwriting, directing and film history.

Dhand graduated from the University of Chicago in 2005 with a major in Interdisciplinary Studies Within the Humanities (a combination of Film Studies, English Literature and some Philosophy). He earned a Master of Fine Arts in 2009 from the Rochester Institute of Technology and moved back to Philadelphia in 2011. He started as an adjunct professor at CHC in 2012 and became an Assistant Professor in 2014.

We recently conducted the following interview with him:

Even as a child, did you always think you’d wind up as a filmmaker?

No. I didn't think seriously about becoming a filmmaker until the end of college. Before that it was almost always literature. I read a lot as a child and still do. I thought I'd become an English teacher. Maybe I'd also write fiction.

What have been the locations for your films?

I shot my first film, “Second-Story Man,” in Rochester, NY. I shot “Crooked & Narrow” in Philadelphia and the surrounding suburbs. Locations have been hugely important for both.

How were you able to make and write so many films — “Maze,” “Soft Typewriter,” “Slow Down,” etc. — and still find the time to teach, have a personal life and so on?

Many of those films were shorts made during my time in graduate school. It's really been the two feature films, “Second-Story Man” and “Crooked & Narrow,” that have been the biggest challenges. For the former I took time off from teaching while in upstate New York and shot in a rapid three-week span. For the latter I shot over 17 days during a very hot summer. And I had no personal life during either.

What was the toughest one to make? Why?

Probably “Crooked & Narrow.” The project kept getting bigger as it developed. We barely had any money. I wanted to shoot a lot of urban locations, so moving — packing everyone and everything into vans and cars — was always tricky.

When and how long did it take to make “Second Story Man?”

I shot it in 2011 over the course of 18 days. It probably took about two years, including development, pre-production and post-production

How much money were you able to raise in order to make it?

What are your hopes for “Crooked and Narrow?”

I'd really just like two things: for more people to see the film and for this film to be in some way a springboard to my next project.

Who are your own favorite filmmakers?

I have a lot. I love Orson Welles, Rainer Werner Fassbinder, Luis Buñuel, Claude Chabrol, Lucrecia Martel, Jacques Tati. The list could get too long.

What are your favorite films of all time?

Another long list. At this very moment and in no particular order: “Blue Velvet,” “Playtime,” “Memories of Murder,” “Touch of Evil,” “Death by Hanging,” “The Friends of Eddie Coyle,” “Once Upon a Time in Anatolia,” “The Great Silence,” “La Ceremonie,” “The Joke,” “The Ascent,” “Stalker” ...

Is your ambition to be a full-time screenwriter and/or feature-length filmmaker?

Yes, but also to teach. I love both. Ideally I'd continue to make a few every few years, perhaps mix that in with some shorter projects here and there and also keep working with students who want to get into the same world.

What is the hardest thing you ever had to do?

I suppose making these last two films was hard. That's a pretty boring answer. I think in the grand scheme of things I probably haven't had to do anything that is incredibly difficult, that is, given what a lot of people do daily.

What do you like to do to relax (if you ever do)?

Would you like to mention the names of a spouse and/or children?

What is your best personality or character trait?

If you could meet and spend time with anyone on earth, who would it be?

Maybe Leonard Cohen. He seems to have a lot of life's answers.