[caption id="attachment_2930" align="alignleft" width="199" caption="Garner goes up for 2 of his 1,024 career points against Lawrenceville (Photo by Deidra Lyngard) "] 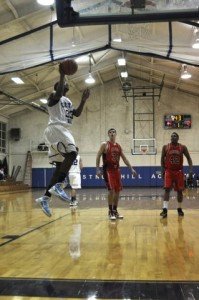 Milestones are something all people, especially athletes, would like to accomplish in their lives.  Malik Garner, a 6' 5" junior for the CHA Blue Devils, reached the 1,000 point milestone on Feb. 11 against Penn Charter.

Malik, who transfered from The George School, where he played two seasons (he had freshman and sophomore seasons at George, and transferred into CHA as a repeat sophomore), scored 457 points at George and, through the final Inter-Ac game of the 2010-2011 season, has 567 in his CHA career, totaling to 1,024 points.

When asked about what this milestone means to him, Garner said it was an honor.

"It's a great milestone in any career," he said, "It's no easy feat, so to have accomplished it makes me feel like all of my hard-work is paying off."

Of course all the great athletes have had help along the way to shape their successful careers.  To Malik, it's his father and his teammates.

"My dad spent hours teaching me the game, so I give him a lot of credit, " said Garner, "But I also know that I am nowhere without the guys by my side each time I step on the court."

While this is a huge accomplishment, he knows it is just a pit stop in what he hopes will be a long career.

"I feel like it's just the start of things for my career," said Garner, "I know I haven't reached my potential yet, but this milestone lets me know that I am on the right path, hopefully one paved with success and longevity."

Why shouldn't he feel that way?  With a whole senior season ahead of him, there's no reason he can't reach the 1,500 club and other milestones beyond his high school career.