Chestnut Hill artist Abbey Ryan's paintings are in more than 900 private, public and museum collections around the world. by Len Lear If you did not know better, you would think that Abbey Ryan was … 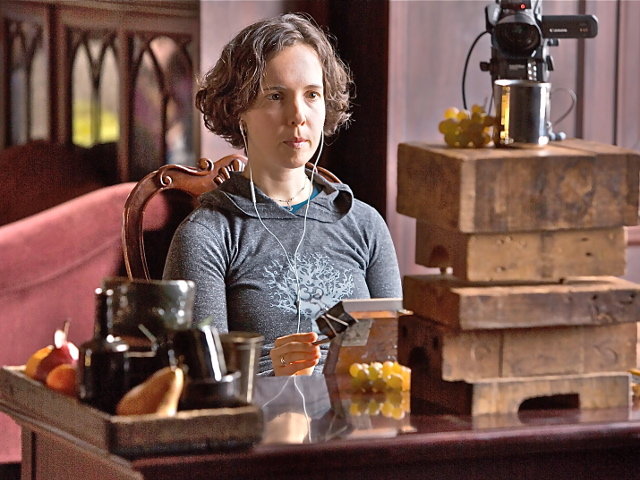 Chestnut Hill artist Abbey Ryan's paintings are in more than 900 private, public and museum collections around the world.

If you did not know better, you would think that Abbey Ryan was just a modest, unassuming teacher at Arcadia University in Glenside, where she has been a faculty member since 2007 and is now assistant professor in the Art and Design Department. But this Chestnut Hill resident, who is the inaugural recipient of the Dr. Norman Johnston Faculty Fellowship in the Humanities and Social Sciences, beginning June 1, 2016 and ending May 31, 2018, may just be one of the most celebrated artists in the Delaware Valley, if not the entire country.

Ryan, 36, is ranked fifth on the list of 49 Creative Geniuses by Boost Blog Traffic. Her paintings are in more than 900 private, public and museum collections around the world, including the John F. Peto Museum in New Jersey, Pratt Institute in Ithaca, N.Y., Mason Murer Fine Art in Atlanta and Blutenweiss Gallery in Berlin.

“As a child, I always loved drawing and any kind of ‘creating’ and wanted to be an artist when I grew up,” she said last week, “but I also always really liked science and also wanted to be a neurosurgeon. I attended Arcadia University initially for physical therapy, but while at Arcadia I discovered the field of medical and biological illustration.”

Ryan got her first degree, a B.A. in Scientific/Pre-Medical Illustration, but decided to stay in college an extra year to complete a second degree, a Bachelor of Fine Art in Painting. Her plan was to attend medical school for medical illustration, which she did at Johns Hopkins School of Medicine for a semester following undergraduate work.

Johns Hopkins has a highly competitive and prestigious program in medical and biological illustration, and Ryan was the only student accepted early. Ultimately, though, she decided to leave medical school in order to pursue life as a fine art painter. She took a year to prepare and apply and then went on to get her Master of Fine Art in Painting from Hunter College in New York City. “I've never regretted my choices,” she said.

The peripatetic Chestnut Hill resident (for the past two years) has painted in Brazil, Chile, South Korea, Cuba, Spain, Italy and all over the U.S. “I don't think I can pick a favorite,” she said, “because I've had so many incredible experiences: painting a mango in Rio de Janeiro, the Andes in Santiago, Gyeongbokgung Palace in Seoul, the Malecón in Havana, painting a plate of sardines from Mercado de La Boqueria in Barcelona, fresh-picked tomatoes from Mercato di Testaccio in Rome, olive groves in Assisi, the view of Mount Subasio from Perugia, the deep rolling space in Todi, Tuscan parmesan in Florence ... I've been very lucky.”

Ryan is a recognized leader in the global “Painting a Day” movement in contemporary realist painting. Her work has been featured in “O, The Oprah Magazine;” “Linchpin: Are You Indispensable?” by best-selling author Seth Godin; “Making It In the Art World and New Markets for Artists,” by Brainard Carey; and on FOX29’s Good Day Philadelphia.

Ryan took up the practice of making "a painting a day" and posting it on her blog (RyanStudio.blogspot.com) in 2007. Many other artists were then doing (and still are doing) a similar thing, which has created a whole new market for artists to make their work accessible to people all over the world.

Ryan’s Norman Johnston Faculty Fellowship research will consist of a two-year investigation of her body of oil painting works entitled “the light, the shade,” in which she has been actively engaged since 2012. She plans to have a culminating exhibition of the work she creates over the course of the two years. Her research will also include spending a month painting on Patmos, Greece (difficult research).

“In my ‘the light, the shade’ series, I create classically illuminated still life paintings with compositions that are partially obstructed by a shadow-like veil of darkness,” Ryan explained. “Within each painting, luminous forms are bathed in light while the remaining forms in darkness are barely visible, creating a visual embodiment of the paradox of light/dark. Viewers of this work have reported sensing an association with analogous concepts such as good/evil, sight/blindness, visible/invisible, seen/unseen, power/weakness and freedom/containment.”

What was the hardest thing Ryan ever had to do? “In 2004, I flew to California and for three weeks painted a huge commission for close family friends. It was a life-sized family portrait of five whose 6-year-old little girl, Quincy, was dying of cancer. Quincy passed away three months later.” 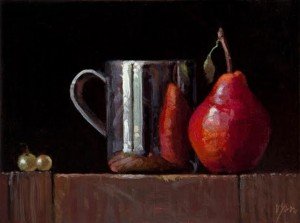 Which talent that Abbey does not have would she most like to have? “High-wire tightrope walking, because it just seems unfathomable to me that in 1974 Philippe Petit walked on a wire strung between the Twin Towers of the World Trade Center.”

What is Abbey’s most treasured possession? “My small cigar-box easel. I have used it to paint almost 1,000 paintings since 2007. I bought it for $2 from BnB Cigar Shop in Chestnut Hill.”

In her spare time, Abbey likes to run on Forbidden Drive, go to the Philadelphia Museum of Art, spend time with her family and nieces, watch movies, do Zumba, spend time at the beach, go to Goat Hollow with friends and go on hikes with her Jack Russell Terrier, Zuca.

Most of her friends and co-workers would say that Abbey’s most impressive characteristic is her attention to detail, but she insists that it’s the fact that “I can shoot three-pointers (in basketball) like most people can shoot a lay-up.”

Abbey also wants to take this opportunity to “mention my gratitude for my amazing partner, Leigh Hopkins, 47, who is literally my favorite person on the planet.”

Did Abbey ever think of doing a newspaper advice column? The title "Dear Abbey" sounds kind of catchy. “Yes!” she said. “I would LOVE to do that!”