Crown and picture frame moldings, wide door casings, and fluted mantle, provide the perfect setting for modern furnishings. by Patricia Cove We all know how important personal character is. Although … 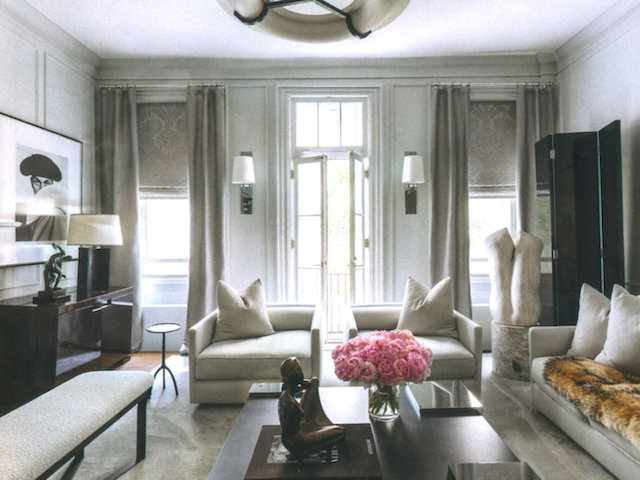 We all know how important personal character is. Although its actual definition can change, depending on who you ask, its inherent meaning usually stems from reliability, truthfulness, and authenticity. Traits that give a person credibility, that stem from a trustworthy and admirable nature.

Most often, having “character” is directed at individuals. But what about buildings?

What about spaces and surroundings? Can they have character too? The definitions of character have always fascinated me. As a little girl, my grandmother would bring me to Chestnut Hill to shop. I had no idea then what made the street and the shops so special to me. What was it about the old buildings, the cobblestone street, the soft colors and the warm light? And why did so many other people like the area so much as well?

Often, having character can transcend definitions. But no matter how it may be defined, it is pretty fair to say that we, as individuals, are more often attracted to places and surroundings that exhibit those enigmatic traits than those that are devoid of them.

Because of my position, I am often involved in discussions having to do with spaces and rooms and how people want them to look and feel. Early on, 95% of my work involved restoring historic buildings and interiors. Crown moldings, door casings, chair rails and window trims were architectural elements that gave a room character. The varying designs and profiles of such trims were significant of their period, and their patina gave the room authenticity and, of course, historic character.

But over the years, as interiors took on a more open feel, those trims disappeared. Spaces became box like, devoid of the architectural elements that provided so much interest and served as anchors to the seating and furnishings of the space.

Interestingly enough, the exterior architecture of new construction these days will still try to incorporate historic references from a mix of historic architectural styles, while leaving the interior “rooms” empty, box-like and lacking any form of character-defining features.

So creating character within the interiors of new construction becomes a real challenge for the home owner, who is often left with shopping for furnishings on the internet or the local big box store and ending up with rooms that lack any real interest, historic reference, or individualism. I keep returning to the same question: Why would anyone want their home to look just like their neighbors?

Chestnut Hill and its neighboring communities are loaded with authentic, historic buildings. For the most part, these buildings have been lovingly maintained outside and in and, in some cases, need some loving care. But in almost all cases, still exhibit those wonderful elements that give the building character.

There are people who recognize these elements, and grasp onto them because character is something that is extremely difficult to replicate. And once you have it, who would want to let it go?

It is one thing to build a new home and, for a number of reasons, not include interior architectural features like moldings and casings. But the tragedy occurs when an owner of a historic home, in an effort to be “modern,” removes walls and strips the interiors of those integral architectural features. The house remains historic from the outside, but its historic value has decreased along with its integrity and transcendent character.

Many people are of the belief that in order to have a current interior, the rooms need to be devoid of these features, when, in fact, the opposite is true. Rooms today are often box-like and become dependent on original furnishings and accessories to create an engaging space. And only then do some begin to realize how much more distinctive a space could be if only the room were anchored by a crown mold, a coffered ceiling, or a paneled wall. And would soon become disillusioned to learn just how much it would cost today to have these lost features replaced.

If you are lucky enough to own one of these treasures, celebrate its uniqueness.

Place your modern furnishings in a room with paneled wainscoting, egg and dart trims and fluted pilasters. The luster of these architectural gems is guaranteed to make everything else in your rooms sparkle!

Patricia Cove is principal of Architectural Interiors and Design in Chestnut Hill, and can be reached at Patricia@PatriciaCove.com

Design for all spaces

Celebrate spring and summer with flowers in new and unexpected places

The challenge of restoring historical rooms