Buckley Park: One of the first memorials to honor Vietnam vets

A memorial plaque at the Chestnut Hill park. (Photo by Pete Mazzaccaro) by Sue Ann Rybak This year marks the 50th anniversary of the Vietnam War – a war that divided a nation and killed 58,220 …

Buckley Park: One of the first memorials to honor Vietnam vets 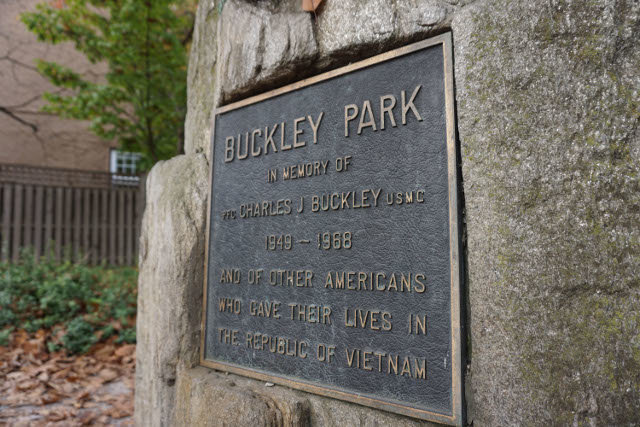 A memorial plaque at the Chestnut Hill park. (Photo by Pete Mazzaccaro)

This year marks the 50th anniversary of the Vietnam War – a war that divided a nation and killed 58,220 Americans. Chestnut Hill resident Charles Joseph Buckley and Mt. Airy resident Lawrence Joseph Bolger were just two of the 646 men from Philadelphia who died fighting in Vietnam.

Most Hillers are familiar with Buckley Park at East Hartwell Lane and Germantown Avenue, but unfortunately few know who the young Marine was or that Buckley Park was one of the first memorials in the country to honor Vietnam Veterans.

Unlike veterans of World War II, returning Vietnam veterans did not receive the same level of recognition for their service in a war they didn't create but were forced to fight in – if not for their country, then for their buddies next to them.

Even today, those Vietnam veterans the Local approached while doing research on Buckley Park were hesitant to talk about the war and about the circumstances regarding that period. One message remained clear and that was to remember and honor men like Buckley and Bolger – young men who made the ultimate sacrifice. Tell their story – they are more than a number or a name etched in stone.

Buckley, who attended Cardinal Dougherty High School, decided to join the Marines with his best friend Joseph “Jo-Jo” McClafferty, rather than get drafted.

Former VFW Post 5205 Commander Jim McCafferty said that, under the Buddy System, two enlisted men could train and be stationed together.

Buckley was only 19 years old when he was killed by enemy rocket fire near the Demilitarized Zone about 60 miles north of Da Nang, in Vietnam, according to an article in The Philadelphia Inquirer on Dec. 24, 1968. He was a member of a mine disposal team in the 1st Marine Division.

The article stated, “His mother, Mrs. Charles Buckley, said she received a letter from him about two weeks ago in which he requested photographs of his family and friends.”

“I'm sort of down in the dumps,” she quoted her son as saying, “and maybe they will cheer me up.”

McCafferty said he only had a month left before he completed his tour of duty.

Steve Kurtz, who grew up in Chestnut Hill, remembered Buckley, who was four years younger than he was. He said while they didn't play together as kids, he would often see him when he took the “shortcut from Willow Grove Avenue to the Water Tower Recreation Center” where he spent “the majority of his adolescence.”

He said Charlie and his younger brother Vince lived at the Wyndmoor Garden Apartments, where their father was a superintendent.

Kurtz smiled as he recalled making a trade with Buckley for a beat-up, black English-made Raleigh three-speed bike. He said the damage was probably caused by Charlie riding the bike full-speed down the hills at the Water Tower.

“The bike was definitely an upgrade from my old beat-up American Bike – it had three gears,” he added.

Kurtz said he lost track of Charlie when he went into the Army in 1965.

“It was heartbreaking to see him at his funeral at Kirk and Nice in Germantown,” he said.

Kurtz added that McClafferty was told he had to escort Charlie's body home even though he wasn't stationed with him at the time. A fellow solder accompanies every fallen member of the United States military home to his burial place. 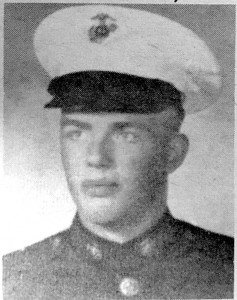 He recalled seeing McClafferty standing in his dressed blues standing at attention – fulfilling his duty to bring his best friend home – living by the Marine motto "Semper Fidelis" ("Always Faithful").

Jack Leaming, commander of VFW Post 5205 and a 10-year U.S. Navy veteran of the Vietnam era, also shared a childhood memory of Buckley. He recalled seeing Buckley swing on the swings at the Water Tower Recreation's Center's playground.

“He was fearless,” Leaming said. “He was swinging so hard, he went over the top, and fell onto the top bar and broke his arm.”

In an article in the Local, dated Jan. 23, 1969, about Buckley's funeral Mass, Rose McClafferty, the mother of Joseph, recalled the many hours Buckley had spent in their home before enlisting in the Marines in January of 1966.

“He had the nicest disposition you could ever imagine,” she said, “He always had a smile on his face.”

“I, like most of my fellow young Marines of the Vietnam era, served with pride and dedication,” he wrote. “Like PFC Buckley, I arrived in Chu lai Vietnam in March of 1968. What I remember most about this period is the extreme heat, unrelenting mosquitoes, and boredom, occasionally interrupted with rockets fire.

“During my 13 months tour of duty, we would on occasion lose a few Marines. This was never easy, but if it was someone which you knew only in passing, it didn't affect you greatly. After all we were all young and would live forever!

“Then on that one horrendous December morning (Dec. 21, 1968), I lost a friend – one who always had a smile on his face and had a way of making you feel great in spite of the circumstances. This young man was not only an outstanding Marine, but also an incredible individual.

“When Charles lost his life it affected everyone I knew tremendously. His death made us come face to face with our own mortality. He was a charismatic presence which served as a very bright light during a very bleak period. PFC Charles J. Buckley was an inspiration to me then, and his memory still serves as an inspiration to me today. I am proud to have served with him and to have known him.”

A memorial to ease the hurt

The Chestnut Hill Community Association and friends of Buckley decided to build the park in memory of the young Marine.

As a child Buckley and his brother Vincent and his sister Bonnie would often in play in park area, which originally was a World War II Memorial Park. Buckley Park was dedicated on June 2, 1973, after more than three years of planning, negotiating and fund-raising. It was one of the first memorials in the country to honor Vietnam Veterans.

According to the article in the Local, an honor guard from the Marine Air Reserve Detachment stationed at the Willow Grove Naval Air station was present for the ceremony, as well as Buckley's family, friends and several representatives from the City of Philadelphia and the Chestnut Hill Community Association.

Thanks to countless volunteers and generous donors, including a grant of $1,040 from the Chestnut Hill Community Fund, the community was able to raise the $6,000 needed to build the park.

In the center of the park a bronze plaque affixed to a 5-foot-high granite stone reads, “In memory of PFC Charles J. Buckley, USMC, 1949 - 1968, and of other Americans who gave their lives in the Republic of Vietnam.”

-- Part 2 will appear next week