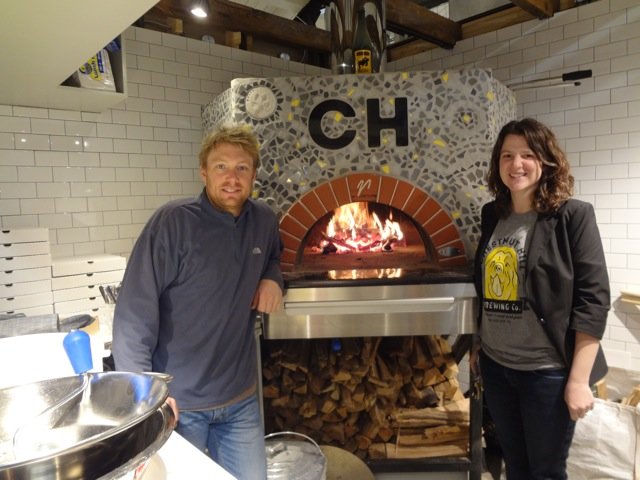 At Chestnut Hill Brewing Company, Nick Gunderson, 36, makes beer. His wife and business partner, Lindsey Pete Gunderson, 31, does "everything else." At least, that's what her business card reads. Quick to note the exaggeration, Lindsey credits Nick with almost single-handedly transforming an empty space in Market at the Fareway (behind the Chestnut Hill Hotel) into an attractive dining venue where guests can pair craft brews with authentic, wood-fired pizzas.

Drawing on a background in construction, Nick built the pizza stand, worked on the brewery and poured the polished concrete counter and tap tower in the brewpub. Lindsey, who graduated from MIT with a degree in management science and later attended Columbia Business School, looks after the finances and includes hiring, shopping and event planning among her responsibilities.

A native Minnesotan, Nick met his future partner online when she was working as a business analyst at Target corporate headquarters. The couple drew inspiration for their venture from Punch Pizza, a favorite Minneapolis haunt that serves up Neapolitan pies and craft beers. They decided to take the concept one step further and brew their own.

Nick traces his interest in brewing to 2011. "I was getting into the craft brew scene and enjoying craft beer," he remembers. Then his brother brought home a do-it-yourself extract kit, which included the essentials for making beer on top of the stove. "If you can make macaroni," he quips, "you can make beer." He acknowledges, however, that "it can get as complicated as biochemistry."

Essentially self-taught, Nick has taken no formal classes. "Classrooms were never really my strength," he admits, having majored in exercise science at Minnesota State University. Preferring to "play around with things" on his own, he has read "stacks of books," among them “Brewing Up a Business” by Sam Calagione, founder of Dogfish Head Craft Brewery, and “How to Brew” by John Palmer. He has also immersed himself in YouTube videos.

Nick creates all the beers at the new business. If he has a beer he enjoys, he tries "to figure out the blueprint" of how it was made. Then he "tweaks it" to put his own stamp on it. Knowing his father-in-law, Ron Pete, to enjoy a good martini, Nick crafted a barley "wine," a beer low in hops but high in alcohol. The couple named it Mountain Mover because, Lindsey explains, "That's what we call my dad. He goes to great lengths to make things happen that have a big impact."

Ron Pete and his wife, Abby, own both the Chestnut Hill Hotel and the Market at the Fareway. Lindsey credits her parents with having "played an integral role in helping us get this off the ground." Not surprisingly, the couple believe "There's a beer for everyone." For those who dislike the taste of hops, Nick suggests a barley "wine" or one of the Belgian brews with hints of coriander or citrus. He also recommends fruit beers, those to which fruit, such as strawberries or raspberries, are added during fermentation.

Knowledgeable beer enthusiasts though they be — Lindsey once thought of opening a beer-friendly youth hostel — neither owner has experience making pizza. Instead, they collaborate with chef Chad Lassin to create the menu. They obtain produce and sausage from Lancaster Farm Fresh. Just Beet It, a spring special, boasts roasted beets, goat cheese and Lassin's own spicy honey.

Some menu items remain constant, such as the Trenton Napoli, which Lindsey describes as an "upside down" pizza because the cheese goes on first, and the “Pontz,” named after her cousins named Pontz who insisted on a pie with meat. The Pontz is the only pizza offered with meat, (sausage). It also has tomato sauce, mozzarella, oregano, Parmesan, roasted onions and cremini mushrooms. All the other pizzas are vegetarian.

Chestnut Hill Brewing Company opened in January but served only pizza. The co-owners decided not to wait until they could also offer beer. Nick explains that, after a brew session of about seven hours, he moves the liquid to fermentation vessels, where the length of its stay depends on the type. An ale might take two weeks or less while a lager might need a month. After the fermentation, he transfers the beer to kegs, and it’s ready to drink. The beer started flowing in mid-April, and a full selection is expected sometime in May.

One other individual makes a major contribution to Chestnut Hill Brewing Company. Ralph, the couple's Newfoundland, acts as mascot, and a caricature of his face graces the company's logo. While Ralph abstains from beer, he loves pizza. Unlike his owners, though, he's no vegetarian.