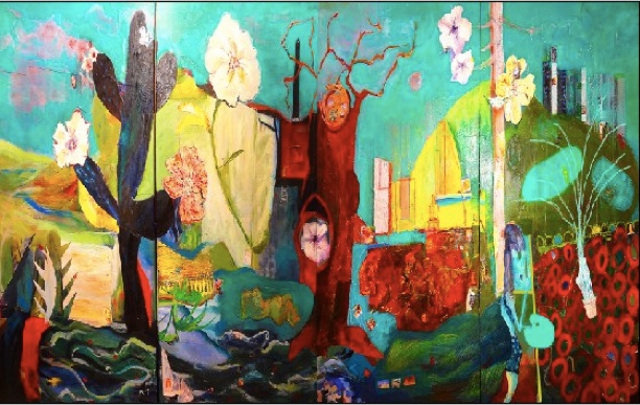 Center on the Hill, 8855 Germantown Ave., recently showed “Serious Play,” a group exhibition featuring artwork by ARTsisters, a group of professional local female artists “who empower each other and the community through their art.” Seen here is “Shades of Green,” a collaborative green project by ARTsisters.[/caption]

For almost four decades Linda Dubin Garfield worked as a guidance counselor helping Philadelphia students figure themselves out. But it wasn't until she was in her early 50s that she truly decided what she wanted to do.

After announcing to her parents when she was only eight years old in Mt. Airy that she wanted to be an artist, Garfield finally pursued that wish after taking a class in printmaking at the Main Line Art Center in the early 1990s.

After high school, instead of chasing art, she listened to her parents' warnings that artists make very little money. “I’m always telling kids to follow their dreams,” Garfield recalled during a recent telephone interview, “so when I retired, I followed mine.”

To reach those dreams she's had to beat breast cancer and survive working in the Philadelphia School District for almost four decades, while coming out not only with her imaginative capacities still intact but also with a strong will and discipline to work.

Now, at 71, Garfield has taken to traveling to faraway places with her husband and making art with a colorful rhythmic approach, with a quality that makes one think she has been refining her craft since she was eight. There's something peculiar to her paintings that at once bring to mind French masters of the late 1800s and early 1900s and the calm, flowing feel of the Japanese paintings of curling waves or a fishing village. They blend the magic world of imagination with a thoughtful and evocative reality that seems to be on the move, like a ripple.

Those places she's been — Peru, Austria, Hungary, Antarctica — serve as landscapes that provide her with a wealth of artistic ideas. In 2005, Garfield founded ARTsisters, an organization with a double mission: creating a strong network of local female artists and using art to benefit one another and their local communities through workshops, fundraising, etc.

All year long ARTsisters holds numerous exhibitions and events, donating a portion of sales to a specific non-profit. Until Dec. 1, their exhibit, “Small Works,” was displayed at Center on the Hill at the Presbyterian Church of Chestnut Hill, 8855 Germantown Ave.

Over the years, they've collaborated with numerous non-profit organizations like Adopt a Pig, Endow-A-Home and The Food Trust.

The group grew out of the strange place Garfield found herself in when she retired in 2003. She was used to having colleagues, but now, working as an artist she found herself in a new world of solitude. As she applied for different exhibitions, she found an art world that was difficult to break into. “I worked for 42 years, and here I come to be an artist,” she said.

She shared some of her frustration with her friend and fellow artist, Leslie DeBrocky, who acted like a sister to Garfield, discussing her art and the issues an individual artist faces. From that relationship ARTsisters was born. It was a chance to network, a way to bring talented female artists together and a means for exhibiting work. They can schedule group exhibitions, and from those, and from meeting one another, members can land solo shows too. “We really care for each other,” Garfield said, “and share things the way sisters do.”

This past summer, one of the places the 26 members who comprise ARTsisters showed their work was in a show called “Renewal” in Old City. (They also have an email list of more than 75 interested female artists.) Twenty-five percent of sales and proceeds from a July 20 workshop benefitted Women's Way, a group working to empower women by leveraging for grants and policy initiatives.

This coming March, ARTsisters will celebrate its 10th anniversary with “Ten Years of Color,” an exhibition that will be hosted at Jenkins Arboretum in Devon. Meanwhile, in between, members will show their works in group shows and individually.

As for her own work, Garfield works in monochrome printmaking, where she paints in ink right on the surface she's working with, then goes to the printing press. Sometimes she may put it through the press 10 times; other times it is one and done. “I have to sort of percolate with it,” she said.

A fine example of her kind of talent, which is artistic and emotional, is “A Fishy Story,” part of Garfield's “My Body/My Story” series she created for last year's Philly Fringe Festival. For the past nine years she's shown work at the Fringe Festival in connection with a nonprofit. Last year she raised nearly $2,000 for breast cancer research.

Raised in Mt. Airy, Garfield went to Franklin S. Edmonds School and Leeds Middle School. She graduated from Temple U. with a degree in educational psychology in 1961, later earning a Ph.D. Then it was 38 years with the Philadelphia School District. Now retired, she is challenged to maintain the discipline to work every day.

Last year, for their 40th wedding anniversary, Garfield and her husband traveled to Antarctica as well as Chile and Peru. This January they're going to Columbia, Ecuador, Panama and the Galapagos Islands. “We’re like the poster children for our age,” said Garfield, a mother of two and grandmother of nine, about herself and her husband, each of whom has overcome cancer and is now cancer-free.