For the 2017 soccer season five seniors have been named captains for Germantown Academy: (from left) Mike Capone, Ian Lugossy, Will Noe, Mike Roman and Oliver Buck. (Photo by Tom Utescher) by Tom … 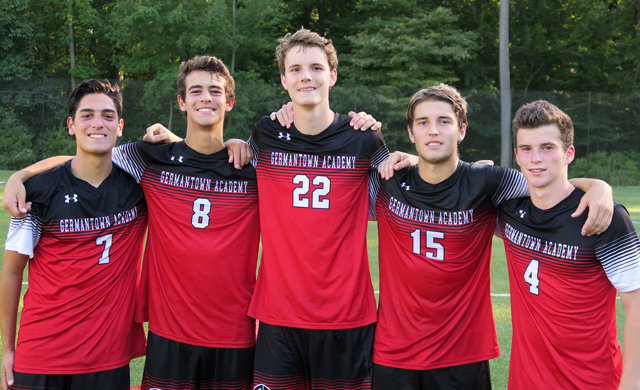 For the 2017 soccer season five seniors have been named captains for Germantown Academy: (from left) Mike Capone, Ian Lugossy, Will Noe, Mike Roman and Oliver Buck. (Photo by Tom Utescher)

At this time last year, the boys' soccer roster for Germantown Academy listed a dozen seniors. After graduating that large group this spring, the Patriots still have made a good start in the 2017 season.

Opening with a 2-1 loss to the elite players of the Philadelphia Union Soccer Academy, GA proceeded to knock off a pair of Friends Schools League teams, beating Shipley 3-1 and then shutting out Academy of the New Church last Friday, 3-0. Patriots fans were happy to see that the scorers spanned the age spectrum, with senior Will Noe netting a total of three goals against the two Friends League foes, while freshman Chris Hackley found the back of the New Church net twice.

Noe is just one of five senior captains for the team. The others are Oliver Buck, Mike Capone, Ian Lugossy and Mike Roman. Joey Battisto, Harrison Combs, Miles Hanamirian and Andrew Luo are also seniors.

Germantown graduated two goalkeepers from the 2016 squad, and this year sophomore Ryan Fairle had moved into the cage, with junior James Werther in reserve.

The other juniors on the Patriots' roster are Drew Budinsky, Ian Cummings, Grant Giampalmi, Caleb Johnson, Jacob Kotik and Mihir Savani, while Michael Dion is the only other 10th grader besides Fairlie.

The ninth-grader who has already made his mark in the scoring stats, Hackley, is a new GA student, but he has older sisters who are current and former members of the Patriots' soccer program. Also on the boys' roster are freshmen Shane Connolly, Maxwell Mateo, Augustine Mulbah and Kolby Palmer.

Brendan Sullivan has returned for his second season as GA head coach, while the tenure of familiar assistants Mike Torrey and Matt Rominger extends back to the previous regime. Joining the staff this fall is Temple University alum Andrew Craig, a former Atlantic 10 Conference Player of the Year.