Bertoia fountain sculpture to be installed at Woodmere

Woodmere Art Museum CEO Bill Valerio inspects Bertoia’s masterpiece, “Free Interpretation of Plant Forms” where it is being held in storage. The sculpture will be installed this week on the …

Bertoia fountain sculpture to be installed at Woodmere 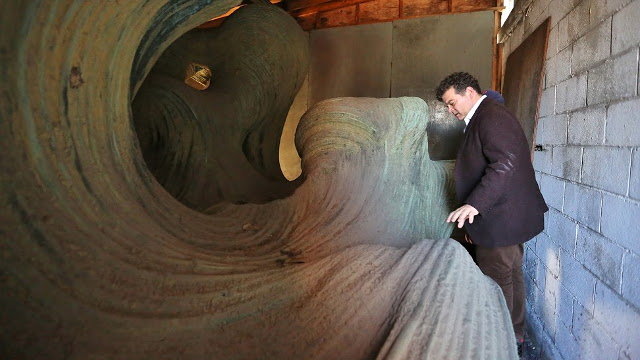 Woodmere Art Museum CEO Bill Valerio inspects Bertoia’s masterpiece, “Free Interpretation of Plant Forms” where it is being held in storage. The sculpture will be installed this week on the museum’s grounds at 9201 Germantown Ave.[/caption]

On Friday, July 22, Woodmere Art Museum will welcome an influential piece of Philadelphia artwork to its grounds. Harry Bertoia’s fountain sculpture “Free Interpretation of Plant Forms” is set to be installed on Woodmere’s grounds at 6 p.m., with a celebration that will be open to the public.

The 50-year-old sculpture was commissioned by Philadelphia’s Percent-for-Art program, and it was the focal point of the central plaza of the Civic Center in West Philadelphia. “Free Interpretation” has been in storage since 2000, when the Civic Center and surrounding buildings were demolished.

“Woodmere is thrilled to provide a home for Bertoia’s magnificent “Free Interpretations of Plant Forms,” the largest and first of his hyper-organic, flowing sculptures,” said William Valerio, director of the Woodmere Art Museum. “It has the presence of a gigantic, living creature that appears both wonderful and strange in its ‘protoplasmic’ vitality.”

The sculpture, which Bertoia created through a unique process of bending copper tubing by hand and welding it with alloy, will be cleaned and conserved by the museum throughout the summer. From Aug. 20 to Nov. 6, Woodmere will open an exhibition featuring Bertoia’s monoprints and other sculptures. His daughter, Celia Bertoia, will give a presentation on her father’s unique sculpting process on Oct. 8 from 3 to 5 p.m.

“He had ideas to make huge pieces that would have a visual impact and to create a complete experience,” Celia Bertoia explained. “Harry really didn’t pay attention to categories or boundaries.”

Originally Italian, Bertoia immigrated to the United States when he was 15. In 1950, he moved to Bally, Pa., to work for Knoll Inc., designing furniture. He then pursued a career that combined industrial design with art and sculpture. Over his career, Bertoia completed more than 50 public sculptures, hundreds of monoprints, and many pieces of jewelry. In 1966, he began “Free Interpretations” in a parking lot outside his studio because it was too large to construct inside. It was completed and installed at the Civic Center in 1967.

“Like so many artists in the 1960s, Bertoia embraced nature as his inspiration and he adopted a ‘Zen’ approach to life,” Valerio said. “The Civic Center was a hard-edged, urban environment, and, by reframing the “Free Interpretation of Plant Forms” as a centerpiece on Woodmere’s six green acres in Chestnut Hill, we are changing the way it is experienced. Visitors will be able to walk right up to it and feel the way it ‘speaks’ to nature.”

Bertoia often visited Woodmere and other Philadelphia art museums and galleries, as he considered the cultural community as his inspiration. Many of his works were sold through the Mangel Gallery.

“’Free Interpretation of Plant Forms’ is a significant masterpiece in the city’s collection of public sculpture,” said Philadelphia Councilwoman Cindy Bass, who represents the Chestnut Hill area. “At Woodmere it will be shared with the citizens of Philadelphia and all who appreciate the museum’s mission to celebrate the artists of our city and region.”