In response to neighborhood outcry over the harsh glare of the city’s new street lights, City Councilmember Cindy Bass is arranging for a meeting. 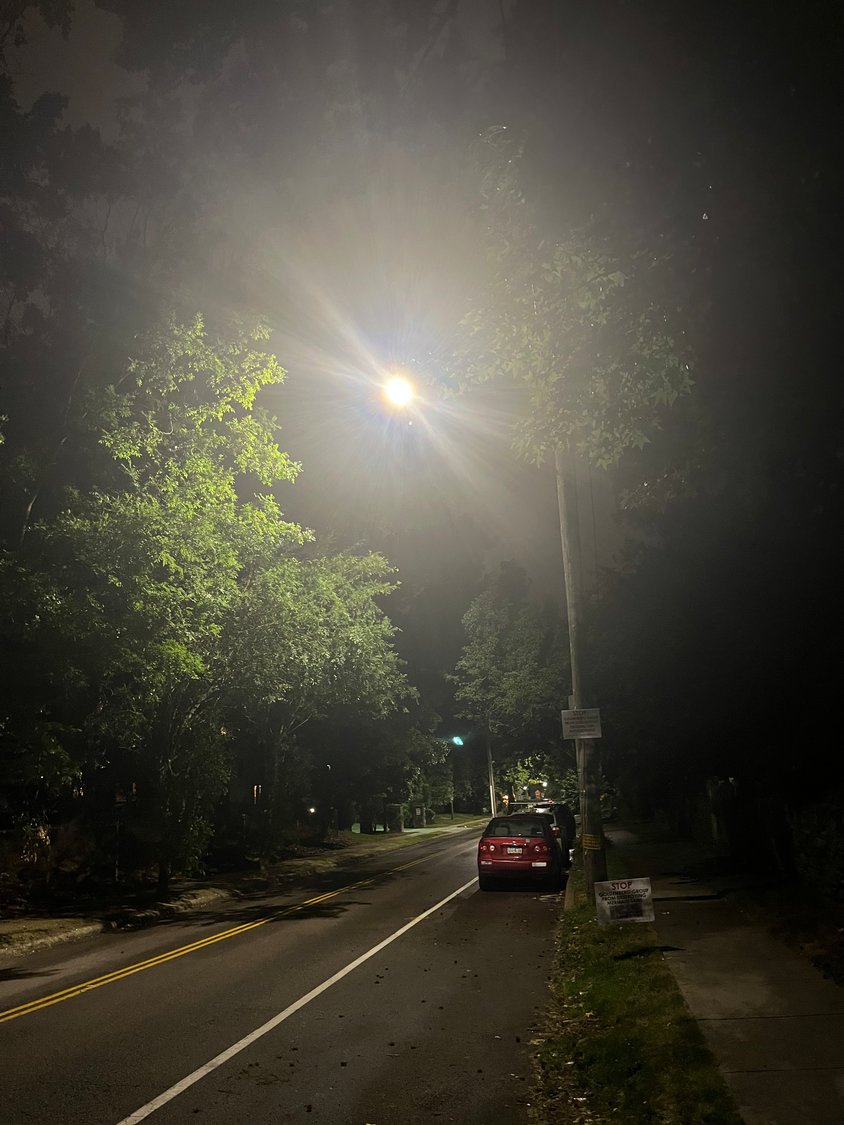 Residents of Mermaid Lane, one of many Chestnut Hill streets that have gotten new LED light fixtures, describe the light as “horrible,” and “too bright, cold and harsh.”
Photo by Isabel Robinson
Posted Wednesday, August 3, 2022 12:00 am
by Carla Robinson

Bass, who said she expects to schedule a meeting within the next week to 10 days, told the Local she understands that “people feel very passionate about” the situation and wants to “be responsive to their concerns.”

“Folks have every right to express themselves, and if this doesn’t fit the bill, it doesn’t fit the bill,” Bass said, referencing the new LED lamps that the Streets Department has begun installing throughout the city, starting in Chestnut Hill. “Every neighborhood is different, and we want to be responsive to what people want for their own communities.”

Bass offered to schedule the meeting after CHCA executive director Anne McNiff contacted her about results of The Local’s online survey about the issue, which shows that an overwhelming majority of residents strongly dislike the new lights.

“There appears to be a wide reaching, consistently negative opinion of these new lights,” McNiff wrote in an email to Bass. “The people who feel they have been negatively impacted  by the City’s choices and are concerned by the impact of the lights on humans, plants, and animals, are asking, ‘Where do we go next to get this addressed?’”

The lights are part of a citywide initiative to replace energy-inefficient, high-pressure sodium streetlights, which cast a warmer, yellowish glow, with new LED fixtures that have a much “bluer” range of light.

The LED fixtures are expected to save money and reduce the city’s carbon footprint, a fact which virtually all residents support.

Their problem, they say, is with the color and intensity of the replacement fixtures that the city has chosen. The color of light is measured in Kelvins, and ranges from warm yellowish tones, which have a lower Kelvin rating, to a colder blue light, which have higher ratings and appear to the naked eye as an extremely bright white. The old street lights had a color range of 2200 Kelvin, while the new fixtures are almost twice as white, at 4000 Kelvin.

As of press time on Tuesday, the survey shows that of the 186 people who responded, 74.7 percent say they’re too bright and too cold, 20.4 percent say they could live with the brightness if they were a warmer color, 3.2 percent say they like them as they are and 1.6 percent have no opinion.

Deputy Streets Commissioner Richard Montanez could not be reached for comment as of presstime yesterday. In the past, he has said the new lights will improve safety because nighttime activity shows up more clearly on security cameras under the bluer light. He also said the city is planning to install technology that will allow specific lights to be dimmed on demand, but that there are no plans to change the color of the fixtures.

Laura Lucas, a past president of the CHCA who said she spoke for the vast majority of the 100 households that are her neighbors on the east side of Highland Avenue, met with Montanez last week.

“He said that I have the same lights as those on West Highland, so they’re 9000 lumens and 4000 Kelvin,” she said. “He explained that they’re going to be getting a dimmer, though they still have to research what kind of dimmer they’re going to select.”

He would not say how much they would dim the lights, she said, and refused to budge on the matter of the color spectrum.

“As far as the Kelvins, we’re on two different pages on that,” she said. “He said he is advocating for the bluer light because it is easier for police cameras to see, quoting surveys about that. He also said that people in other parts of the city have asked for the brighter blue light.

For us, safety means going out to talk to each other at night - not this situation, where nobody wants to be outside because the light is too blue,” she continued.

Bass, however, appears to be more open to making changes.

“This (meeting) gives us an opportunity to get in front of whatever issues there are - if there are changes that need to be made, it’s important we know that now, before we continue to move forward,” she said.

Larry McEwen, an architect and active member of the CHCA, said he understands that the city is under pressure to reduce violence, so “convincing them that less light can actually be a safer condition will take real effort.”

Still, he said he thinks 3000 Kelvins would be best.

“I think a test to compare lamps would have been in order before the City purchased what they did in bulk….I’d like to see a comparison of lamps with varying light levels and degrees Kelvin on a few streets, so we could take readings and get visual preferences,” he said. “At 9,000 lumens, 3500-degree Kelvin, the light seems both brighter than necessary, and too harsh, to me.”

Robert Fleming, a landscape architect who specializes in historic preservation and lives at the corner of Navajo and Springfield, said “Aesthetically, they’re a disaster.”

“I really believe that the night is part of the historic legacy of the world, if you will, it’s part of our historic fabric,” he said.

Fleming, who grew up in Iowa, said he’s been “dreading” the switch in Chestnut Hill ever since he saw what happened to his family’s farm when a nearby town put up similar lights.

“All the specialness and mystery of night is gone. When I was a kid growing up on this farm, you could see the Milky Way every night. I haven’t seen the Milky Way in 30 years.”

He also wondered why cities and towns don’t consult lighting designers when they’re making these decisions - especially since new LED technology allows for such flexibility in color tones.

“Think of all the fabulous things that lighting designers do with the movies - if you’re a cinematographer, light is everything.” He said. “Using light is both a science and an art. We think a lot about how we light our personal spaces, and that mood it creates. But out on the streetscape it’s not considered. Why is that?”

Continued responses to the Local’s survey shows that most of his neighbors agree.

Why would we even consider having these in our neighborhood when there are better alternatives available?” wrote someone from West Highland Ave.

“I am currently renting but had planned to buy a home in this area soon,” wrote someone who lives on Winston Road. “These lights are making me think twice about buying a home here.”

“For years, late at night, I have stepped outside to experience the quiet calm and be refreshed by it. This solace is no longer possible with these new lights.” wrote a resident of West Gravers Lane. “I very much hope changes will be made. I wish that we had been consulted in the first place.”

A Wadsworth Street resident wondered why energy efficiency has to come at the expense of the neighborhood’s nighttime character.

“I now avoid walking on Wadsworth Avenue at night since it is so unpleasant,” they wrote, adding that “Energy-efficient light bulbs inside homes are now able to match the warmth of the incandescent lights…I don't see how that cannot also be the case for streetlights.”

Others disputed the idea that the new lights are safer.

“The overly bright lights create darker shadows,” wrote one. “This creates a situation that I find to be more dangerous. as well as uncomfortable… it is hard to see and trust your vision in the high contrast darker spaces.

Bass, who told the Local she’d read all the comments, said she appreciates residents’ concerns - and has herself been confused by some of the information coming from the Streets Department.

“Some of these are items that we also want to get clarification on,” she said. “We will be talking directly to the commissioner about all of these issues and laying out all of our concerns.”