by Maddie Clark Come Saturday, April 21, at 1 p.m., the Awbury Arboretum will host another event in its yearlong program, the Year of the Pollinator: Pollinators FOUND. “Our April event is the crux … 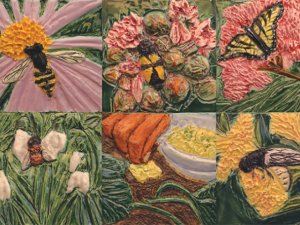 Come Saturday, April 21, at 1 p.m., the Awbury Arboretum will host another event in its yearlong program, the Year of the Pollinator: Pollinators FOUND.

“Our April event is the crux of our Year of the Pollinator program,” said Dan Sardaro, a public relations/publicity intern at Awbury.

The event will be a celebration of 12 key insects and forces of nature that are necessary to the sustainability of many everyday natural elements such as flowers, fruits, vegetables, nuts and seeds.

“Pollinators FOUND” will also mark the unveiling of the arboretum’s interactive art exhibit. The exhibit features 12 ceramic tiles that were designed by Germantown’s very own tile maker, Karen Singer.

In anticipation for the Year of the Pollinators event, Awbury began discussing with Singer the idea of making a series of ceramic tiles in the fall of 2016. After workshopping with Program Director Heather Zimmerman, it was decided that 12 tiles, each representing one pollinator, would be created for the exhibit.

Awbury staff equipped Singer with research, pictures and specific information for each of the pollinators they had chosen. Singer then began working with Awbury’s graphic designer, Beth Miner, to adapt the photos she received, trace them onto plastic and transfer the drawings to clay before she began sculpting each individual picture.

Each pollinator-based tile will be placed in its own corresponding habitat throughout the exhibit. During “Pollinators FOUND,” guests of all ages will have the opportunity to go on a scavenger hunt guided by the Arboretum’s specially designed map to find all 12 of the tiles.

In addition to the scavenger hunt, from 1 to 4 p.m., guests will be engaged in a variety of other activities, including a parlor exhibition, studio talk and other educational programs. The parlor exhibition will be honoring Singer’s Botanically Inspired: Ceramic Tiles and Related Work, which will remain at the Cope parlors all throughout the month of May.

Then at 2 p.m., Singer will present a brief talk on Cross-Pollination: Art, Gardens and Community where she hopes to aid in Awbury’s efforts to make more people aware of the arboretum and all the beauty it has to offer the public.

Though the arboretum has and will continue to feature monthly classes, tours, dinners, and other workshops regarding all things bees, butterflies, moths, winds and anything else having to do with pollination, “Pollinators FOUND” will be the premier event of the Year of the Pollinator program.

In preparation for the event, Sardaro has been releasing monthly blog posts that correspond with the pollinators depicted in Singer’s tiles. Once the year is over, there will be 12 posts altogether.

So far there has been an article for honeybees, wind, and the blue orchard mason bee.

Along with Sardaro’s monthly articles, he’s also been tasked with the responsibility of promoting the “Pollinators FOUND” event as much as possible through media sites like Patch, Phillyfunguide and Green Philly.

During the day of the event, Sardaro will also be trying to capture the essence of the day by posting to various social media accounts.

“I want this day to be interactive and engaging. I think those who can’t make it that day can still get a sense of what happened via Instagram stories, photos, Facebook live, etc.,” said Sardaro.

Pollinators FOUND – art exhibition and scavenger hunt will be from 1 to 4 pm at the Cope House at Awbury Arboretum, 1 Awbury Road, Philadelphia, Pa. 19138. The event is free and open to anyone and everyone. No registration is required. Other details can be found here .