Award-winning filmmaker makes one short gem after another

Judith Redding of Germantown is a filmmaker and screenwriter whose work has won numerous awards. (Photo by Theresa Mercadante) by Victoria A. Brownworth Judith Redding has been making movies in …

Award-winning filmmaker makes one short gem after another 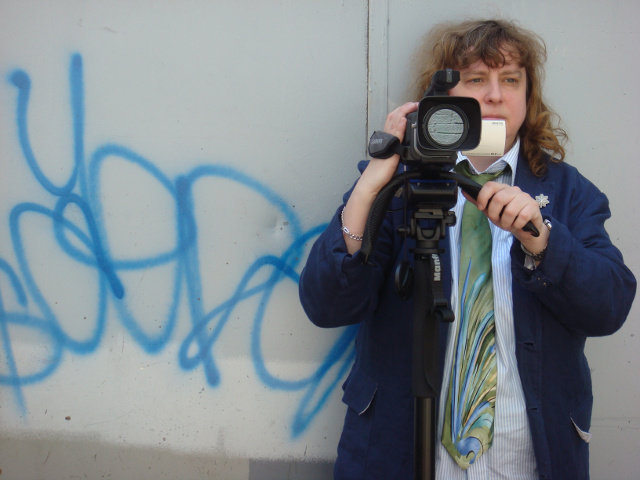 Judith Redding of Germantown is a filmmaker and screenwriter whose work has won numerous awards. (Photo by Theresa Mercadante)

by Victoria A. Brownworth

Judith Redding has been making movies in Philadelphia — and winning awards for them — for 25 years, since she returned from film school. Though not a Philadelphia native, Redding, 52, has been settled in Germantown, slowly rehabbing a 19th century Victoria property that had been abandoned for years.

Redding attended the London Film School in London, England, which she chose over an American film school because “at LFS you got to learn all the technical aspects of filmmaking right away” whereas most American film schools have a more academic slant until several years into their programs.

“When I first moved back to the U.S., my first project out of film school was a music video for the Baltimore rock group Oval Window. Then I started doing my own narrative and experimental films.”

The first of those films, “Mondays,” an atmospheric black & white short about a 19th century laundress with a soundtrack by local musician Patti Little, won a prestigious award, which set the tone for the rest of Redding’s work.

“Working with actual film is incredibly expensive,” she explains, “so one of my first films was a video shot with a Fisher-Price toy video camera, known as Pixelvision. That video, ‘Mondays,’ ended up winning third prize for experimental film in a national competition organized by Sony. The prize was a Sony video camera, so that actually helped my career a lot. ‘Mondays’ was shown on both local and national public television, and I was really pleased when the Philadelphia Inquirer called it ‘a tiny gem’ in a review.”

The films continued from there, and Redding began showing her work locally as well as nationally, at both film festivals and film venues throughout Philadelphia. Her stop-action film, “The Size 7 Social,” was a light-hearted look at what might happen with inanimate objects when their owners are not around. That film also utilized Little’s music. A more somber film, “but would you take her back?” explored break-ups and won another award.

More work — screenwriting, teaching screenwriting at the University of the Arts and writing about film, including interviewing other women filmmakers and writing monthly about women and film for Curve, an international women’s magazine — followed. Redding won the Pennsylvania Council on the Arts fellowship for screenwriting and has been a judge for several local film festivals in recent years, curating events as well.

Redding described some of her recent work: “Right now I have a couple music videos on tap, as well as a couple of poems interpreted as narrative film. I chose a sonnet by Philadelphia poet Ernest Hilbert for my last video poem, ‘William James Still, Drowned.’ I’m shooting a video of another of his poems, ‘Gold Rush,’ about the objects one finds underneath couch cushions, which will be pretty humorous.”

Redding moves seamlessly between the amusing and wry and the more somber and, well, deep. “I’m also working on an experimental film that addresses modern isolation against a backdrop of Philadelphia psycho-geography.”

Her focus on shorts rather than feature-length films is intentional. “Short films are important for two key reasons,” she said. “First, they serve as calling cards for directors, showcasing their visual and narrative talents, along with the talents of film editors, cinematographers and composers. Second, many stories told on film don’t warrant a film that’s feature length; the story a filmmaker wants to tell may be very brief … Don’t let length fool you in terms of the impact of a film. I’ve seen films that were only 10 minutes long but which were striking and memorable. My film ‘American Gothic’ is only three minutes long and came out in 2009, but I still get requests for screenings of it.”

Very engaged in her neighborhood, Redding, who is also co-captain of her block and works with a local animal rescue group, has been long-interested in the often grim beauty of the city’s urban landscape, particularly in Germantown and Mt. Airy. “My films are all shot in Philadelphia,” Redding explains. “My piece ‘Requiem,’ a meditation on graveyards, was shot in six Philadelphia cemeteries, including Laurel Hill in East Falls and the cemetery in the churchyard of St. Michael’s Lutheran Church on Germantown Avenue at Phil Ellena Street, which has some remarkable gravestones.”

Philadelphia is increasingly a site for mainstream filmmaking — something Redding thinks is good for local filmmakers. “Feature film productions coming to Philly is due in large part to the tireless efforts of Sharon Pinkenson, executive director of the Greater Philadelphia Film Office.”

Supporting local filmmakers like Redding is vital to maintaining a thriving film community. Redding says, “The best place to see a short film is at a film festival, and most of the film festivals in Philadelphia show short films either paired with a feature film or as an hour-and-a-half program of shorts. That way, you get to see a film on a large screen, with proper sound.”

Redding says the Northwest also provides a solid addition for local filmmakers, noting, “An important venue to support is ‘Tuesday Nights at the Movies,’ which screens a wide range of films at the Woodmere Art Museum and which is sponsored by the Chestnut Hill Local.”

You can see Redding’s videos on her website, www.necktiefilms.com.