John Byrne and his band will perform in Pastorius Park on Wednesday, July 15, 7:30 p.m. They play original music and traditional Irish tunes with influences from New Orleans, folk and even rock and … 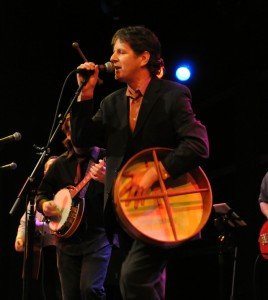 John Byrne and his band will perform in Pastorius Park on Wednesday, July 15, 7:30 p.m. They play original music and traditional Irish tunes with influences from New Orleans, folk and even rock and roll. (Photo by John Hayes)

If you go to hear the John Byrne Band in Pastorius Park on Wednesday, July 15, 7:30 p.m., you’ll be participating in the ancient Irish tradition of gathering around to sing songs and tell stories. John, 43, who is from Dublin, Ireland, remembers family and friends coming over to his folks’ house or going out in the country when he was a child.

“Somebody would start singing a song, and the next thing you know, everybody’s singing,” he recalled. “When it was your turn, you had to sing, so at a very early age I knew at least one song. I got into it more in my late teens when I got a guitar, learned a few chords and began writing lyrics. It all happened gradually; it wasn’t an epiphany.”

John and his band are no strangers to Chestnut Hill. This is their third time performing at Pastorius Park. “It rained the last two times we were here, and the concerts were moved indoors. That’s what happens when you hire an Irishman,” he joked.

In addition to John (vocals, guitar and bodhran, a traditional Celtic frame drum), the band members are Walt Epting, drums; Vince Tampio, bass and trumpet; Maura Dwyer, fiddle and cello; Rob Shaffer, banjo and guitars; and Dorie Byrne, accordion and trombone. “We play mostly original music with some traditional Irish tunes thrown in. Our musicians are really versatile. The band has a Celtic or Americana sound one minute, then you’ll hear influences from New Orleans, folk and even rock and roll coming through.”

In a review of the band’s performance last year, Michael Caruso, the Local’s music critic, wrote, “Byrne understood both the immediate, external meaning as well as the less obvious, more profound intention of the emotions behind every word and its subsequent note because he had entered into the world of those lyrics and has personally lived them.”

Singing about personal experiences can be uncomfortable at times, though. On “The Immigrant and The Orphan,” the band’s upcoming album, there are two songs — “Betsy Ross Bridge” and “Hole in My Belly” — about the difficult time that John and his wife have had trying to conceive a child. “After going through some complicated procedures and spending a lot of money, it didn’t work,” said John. “I talked with my wife and got her permission to write about this because if I play these songs, I’m going to have to tell the story behind them. It took a while to be able to sing them and to be that open and raw.”

One of his band mates even asked John how he can sing about such an intimate experience. John replied, “The first few times you play it, it’s difficult. But as time goes on, you start to appreciate it as a song, as a work of art, as a lyric. You begin to see other people reacting to it. It becomes less about you at some point and just as much about the person who is listening.”

The John Byrne Band has performed nationally and abroad, in both large and small venues. The band recently returned from a gig in Denver where for the third time they performed in a benefit concert for “Education Elevated,” an organization that builds schools in Nepal. Because of the recent earthquake, a lot of the work they did has been destroyed and they need the money to rebuild. “We try to give back when we can, because it’s good karma,” John said. The band’s effort led to several bookings in the Denver area.

One of the highlights for the band occurred in 2010. They played during a VIP reception at the National Constitution Center when former President Bill Clinton presented the Liberty Medal to former British Prime Minister Tony Blair for his work in advancing peace in Northern Ireland.

Coming up, the band will perform at this year’s Philadelphia Folk Festival, Aug. 13-16, in Schwenksville. The band’s new album will be released on September 19 at World Café Live in Philadelphia, and in October the band will lead a tour to Northern and Southern Ireland.

When he was in college, John spent a few summers working in Wildwood, New Jersey. He relocated to the U.S. in the 1990s after receiving a degree in electronic engineering from the Dublin Institute of Technology. He also has a bachelor’s degree in English with a minor in education from Arcadia University and is about half way through getting a masters degree. John and his wife, Dorothy Mansfield Byrne, live in Fishtown.