Having already played in the Maccabi Games at the U.S. level in each of his four years of high school, former SCH student Jordan Lubell will be participating at the international level for the first … 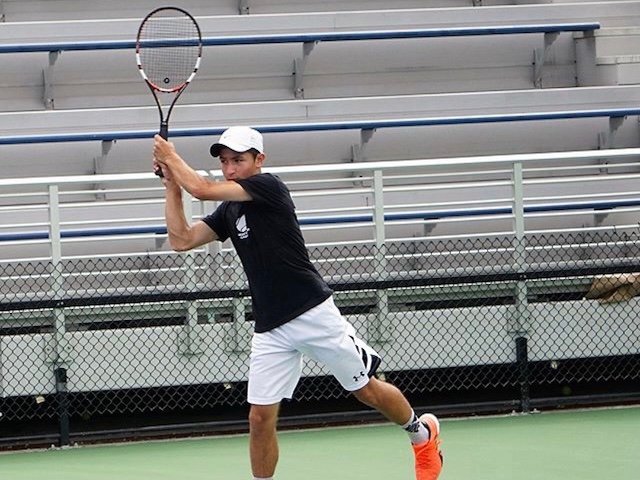 Having already played in the Maccabi Games at the U.S. level in each of his four years of high school, former SCH student Jordan Lubell will be participating at the international level for the first time this summer. He was named to the U.S. tennis team for the Pan American Maccabi Games in Mexico City in July. (Photo by Heather Lubell)

Having competed at the national level of the Maccabi Games in each of his four years as a high school student, Springside Chestnut Hill Academy alumnus Jordan Lubell is now set to compete at the Pan American level in Mexico City this July.

The Maccabi Games, also known as the Maccabiah Games in Israel, are a series of national and international sports competitions that celebrate Jewish athletes. Different levels of the Games are held in different locations around the world, with the Pan American Games held every four years in a Latin American country.

Though this will obviously be a step up from the previous level of competition, Lubell, 18, is not feeling stressed about advancing to this next level. He does realize the amount of work it will take to be fully prepared, however, which is not the easiest thing to manage as he finishes his freshman year at Case Western Reserve University.

“So far I don’t feel a whole lot of pressure, just excitement,” Lubell said. “The level of competition is for sure going to be a lot higher, which I gathered just from talking to people who have been to this before. The skill level is definitely above what it was for the U.S. games.

The Maccabi Games are also a family affair for Lubell, as his younger brother, David, is also a tennis player at SCH who will be playing at the U.S. level in Detroit this summer. While the Games are not designed as a way for athletes to pursue a professional career, being selected to participate remains a tremendous honor that is recognized by all those involved.

“Obviously it makes me very proud that they’re able to take their passion for their sport to another level,” said Heather Lubell, Medical Director/Pediatrician at SCH, Maple Glen resident and mother to Jordan and David. “I’m happy that they’re going to represent their family, and I love the sense of community they get, which is very different from anything else they get from a Judaism standpoint. There’s a feeling of community for them to get together with other Jewish athletes, and that’s very special for them. As a parent, I can’t ask for anything more.” 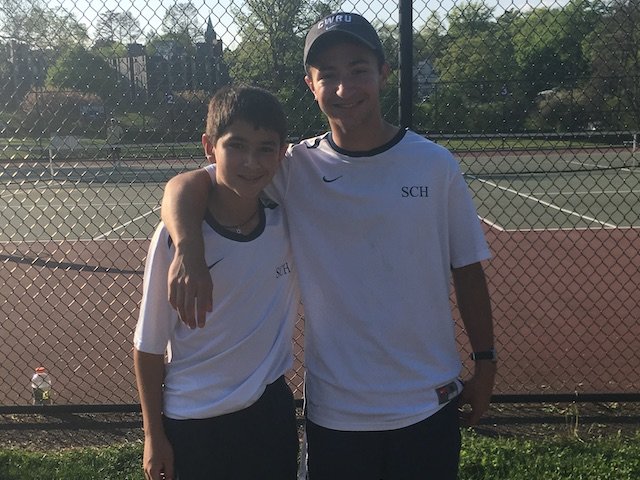 Jordan Lubell (right) and his younger brother, David, at their last match together before Jordan’s graduation from SCH. The two brothers are both tennis players that have participated in the Maccabi Games at the U.S. level. (Photo by Heather Lubell)[/caption]

“It’s awesome to be able to watch him play in general,” Jordan said of his younger brother. “Whenever I’m home, I try to take him to tournaments … Knowing that he’s making the same kind of friendships that I did is pretty special.”

Though he is almost a year removed from his time as an SCH student, Jordan gives plenty of credit to the work of his high school coaches in his development as a player.

“My school coaches really helped me out for sure,” Jordan said. “We always had a lot of fluctuation as a team, but the coaches I had, especially during my last two years, definitely helped a lot. I trained outside of school practices down at Tennis Match Academy, and that was one of the biggest reasons I saw such a huge boost in my game during those last two years.”

Jordan will be working with a different coach this year, however, as Alison Ojeda, head coach of the Women’s Tennis team at the University of Tennessee, was named head coach of the U.S. team. Despite the change, he remains excited at the prospect of training with Ojeda and seeing how she coaches “high-level tennis.”

Amidst all the training for the Games, the element that remains at the heart of the event is a celebration of Judaism and Jewish culture. It is a unifying factor for those involved with the Games and is something that everyone will take in and interpret in a different manner. For Jordan, the larger significance of the event really took hold not during his training, but rather when he was able to take in the sights of the opening ceremonies.

“The first time it really sunk in, in terms of what the games are really about, was during the opening ceremonies, where I was celebrating having something in common with thousands of people there,” Jordan recalled. “It’s pretty rare to have that many people come together and celebrate something that’s not commonly celebrated. It was a pretty cool feeling overall.”

In addition to Jordan and David, current SCH senior and field hockey player Sarah Edelson will also be competing at the Maccabi Games in Europe.

Brendan Sample can be reached at brendan@chestnuthilllocal.com or 215- 248-8819.