At Hill church, musical tribute to victim of Nazi barbarism

The viol consort Sonnambula, ensemble-in-residence at the Metropolitan Museum of Art in New York City, will be joining Piffaro on Saturday, March 16 for its performance of “Terpsichore” at the …

At Hill church, musical tribute to victim of Nazi barbarism 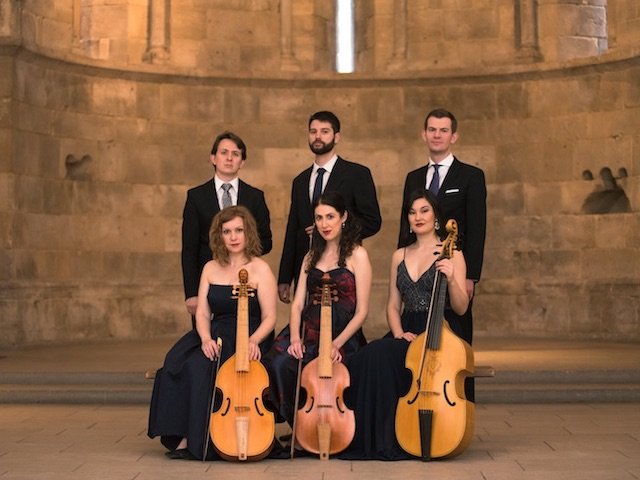 The viol consort Sonnambula, ensemble-in-residence at the Metropolitan Museum of Art in New York City, will be joining Piffaro on Saturday, March 16 for its performance of “Terpsichore” at the Presbyterian Church of Chestnut Hill. (Photo by Paula Lobo)[/caption]

The Presbyterian Church of Chestnut Hill will be a particularly busy musical venue this weekend. The Chestnut Street Singers will perform a concert entitled “Behind Closed Doors” Friday, March 15, at 8 p.m. The following evening at 7:30 p.m., Piffaro will present “Terpsichore,” a program featuring the music of Renaissance composer Michael Praetorius and the vast collection of his 1610 compendium of dance music of the same name.

The Chestnut Street Singers’ program is built around two larger-scale works, “Three Prayers of Dietrich Bonhoeffer” by Philip Moore (b. 1943) and excerpts from “Prophetiae Sibylarum” by Orlande de Lassus (1532-1594).

Moore’s 2002 work sets texts by the German Lutheran pastor and theologian Dietrich Bonhoeffer, an opponent of the Nazi regime in Germany and spent the last two years of his life in a Nazi death camp before being executed.

Lassus’ motets, which look forward to the early 20th century in their exploration of tonality, were composed for private performance in the 1550s but were considered so unusual for their time that they weren’t published until after the composer’s death nearly a half-century later. The music’s lyrics, prophetic texts about the coming of Christ, will be arranged to respond and comment on Bonhoeffer’s prayers.

Although there are no tickets for the concert, the Chestnut Street Singers gladly accept voluntary donations.

The viol consort Sonnambula, ensemble-in-residence at the Metropolitan Museum of Art in New York City, will be joining Piffaro for “Terpsichore.” Sonnambula regularly performs historically informed programs in the Metropolitan’s famed Cloisters Museum. The viols weren’t instruments meant to mark grand occasions of state but, rather, were intended to ornament and enliven daily life. 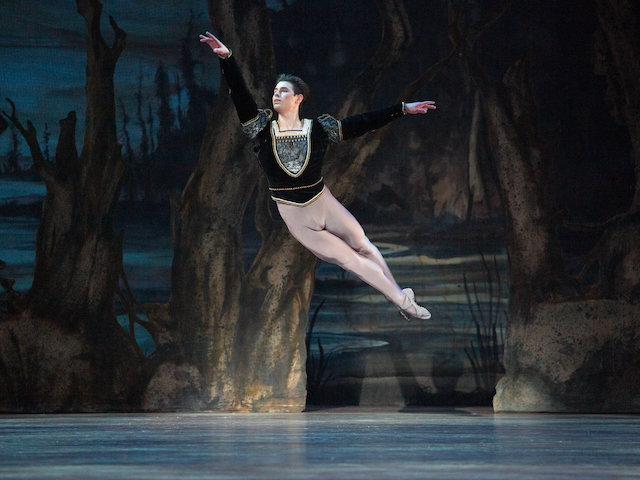 PA Ballet principal dancer Sterling Baca takes on the role of Albrecht in the company's production of "Giselle," which continues through March 17 at the Academy of Music. (Photo by Alexander Iziliaev)

Pennsylvania Ballet’s “Giselle,” currently running through March 17 in the Academy of Music, stands as testimony to why the company has never been better than it is right now. Artistic director Angel Corella has assembled the strongest contingent of dancers – from its principals down through its youngest apprentices – that I’ve seen since I started reviewing the company in 1976. Plus, the choreography of his newly staged edition of “Giselle” shows him to be a master at re-invigorating a classic ballet with just the right amount of contemporary panache.

Although the story of “Giselle” – its “hidden identity” tragic love story, its touch of the supernatural and its ultimate if ludicrous happy ending – may indeed strain the credulity of even the most gullible romantic, when it’s danced a well, as it was Sunday, March 10, it almost makes perfect sense.

Seen by an audience that packed the historic Academy of Music, “Giselle” received a stunning rendition. Conductor Peter Stafford Wilson and the PA Ballet Orchestra gave Adolphe Adams’ sentimental score a luscious reading. Peter Cazalet’s scenic design, David Huevel’s costumes and Michael Korsch’s lighting all came together to evoke a Middle European village from several centuries ago as the perfect setting for this story of misplaced love and a host of vengeful ghosts.

In the role of Giselle, a shy girl who is deceived by a young aristocrat masquerading as a fellow peasant for all the wrong reasons, Dayesi Torriente gave a ravishing performance. Her breathtaking point work supported gestures and movements of delicate fragility that delineated her vulnerability to the dubious charms of the dashing young nobleman who initially is looking for nothing more than a momentary diversion. Her theatrical portrayal conjured up the work of great silent film actresses Lillian Gish and Gloria Swanson yet delivered within the realm of a modern sensibility. Most impressive of all, her dancing was always right on the beat of the music.

In the role of her treacherous swain, Count Albrecht, Sterling Baca gave the finest performance of his tenure with the company. His dancing was the avatar of power and grace. His leaps and turns seemed untouched by gravity and his silent landings recalled the padded paws of a leopard.

But it was his characterization that most impressed. In the first act, every move spoke of an aristocratic conviction of entitlement that gave him the right to take whatever he wanted and then discard it once the initial thrill had passed. But by the end of that first act and then throughout the second, Baca’s every gesture spoke of profound remorse at the realization of what he had done and a willingness to pay for his sins with his own life.

Aleksey Babayev was an excellent Hilarion, the gamekeeper whose love for Giselle results in his death at the hands of the ghostly Wilis. Sydney Dolan was an imperious Myrtha, the queen of the Wilis, Yuka Iseda and Ashton Roxander were splendid in the “Peasant Pas de Deux,” and the entire corps de ballet danced flawlessly Sunday afternoon.

“Giselle” continues in the Academy of Music through Sunday, March 17. Visit paballet.org

Despite an unexplained late start Saturday, March 9, Yannick Nezet-Seguin conducted the Philadelphia Orchestra in one of their most successful concerts of the season. Following in the footsteps of his illustrious predecessor, Eugene Ormandy, the ensemble’s music director presided over a program that adhered to the traditional orchestral format of overture-concerto-intermission-symphony. Not only were the performances of all three scores stellar, but the Kimmel Center’s Verizon Hall was filled to the rafters.

The three works were the Overture to Haydn’s opera, “L’isola disabitita,” in its first performances by the Philadelphians; Mendelssohn’s Piano Concerto No. 1 in G minor, Opus 25, with Jan Lisiecki as soloist; and Schubert’s “Great” Symphony No. 9 in C major, D. 944. They fit together seamlessly in their projection of the continued potency of the Austro-Germanic symphonic tradition of the 18th & 19th centuries.

Although the operas of his far shorter-lived contemporary, Mozart, occupy a far more exalted position in the standard repertoire, Haydn was a notable composer of operas, as well. While only a few have held anything near their place in the regularly produced canon, they often contain music of great beauty and drama. This is especially true of their overtures, in general, and for “The Deserted Island,” in particular. Under Nezet-Seguin’s inspired hands and through the superb playing of the Philadelphia Orchestra Saturday evening, Haydn’s short score came across as an energetic specimen of Haydn’s bristling developmental genius.

Although Mendelssohn’s First Piano Concerto is not one of my favorites, I’d be hard-pressed to deny that the 23-year-old Canadian Jan Lisiecki gave it a sterling reading. Far more enjoyable for me was his encore: one of the numerous “Barcaroles” from Mendelssohn’s lovely collection of solo piano works, “Songs Without Words.”

After intermission, Nezet-Seguin led his first performances with the Philadelphians of one of the towering masterpieces of the standard repertoire: Schubert’s “Great” Symphony in C major. The term “great” refers to its being larger in scale than his previous symphony in the same key, but the moniker has come to announce its unique place within the specific canon of Schubert’s symphonies and the broader repertoire of 18th, 19th & 20th century symphonies.

Schubert composed his Ninth Symphony in 1825, three years before his untimely death at the age of 31. Although he was already suffering from the effects of the syphilis that would eventually lead to his passing, the score reveals no signs of either emotional depression or inspirational decline. On the contrary, it’s one of the most exuberantly optimistic of all Schubert’s major works, and it is the most finely constructed of all his symphonies.

Despite its 50-minute length, it holds together with the tightness of a drum. Each of its four movements sustains an unbroken line of through-development projected by melting lyricism and imaginative orchestration. Each of the four individual movements leads one into the next with an equally uninterrupted narrative that leads directly to its ultimate conclusion like a finely wrought play.

Without the benefit of a score, Nezet-Seguin led the Philadelphians in a rendition of devastating emotional power and transcendent spiritual uplift. He drew glistening playing from the orchestra’s legendary strings, mellow sweetness from its immaculately matched woodwinds and stentorian performances from all the parts of the brass choir. Timpanist Don Liuzzi effectively accented the playing of all the other sections.