Ella Torrey, 91, a former Chestnut Hill resident who now lives in upper Roxborough, holds a photo of herself at the United Nations. Torrey was the Public Information Officer for Eleanor Roosevelt … 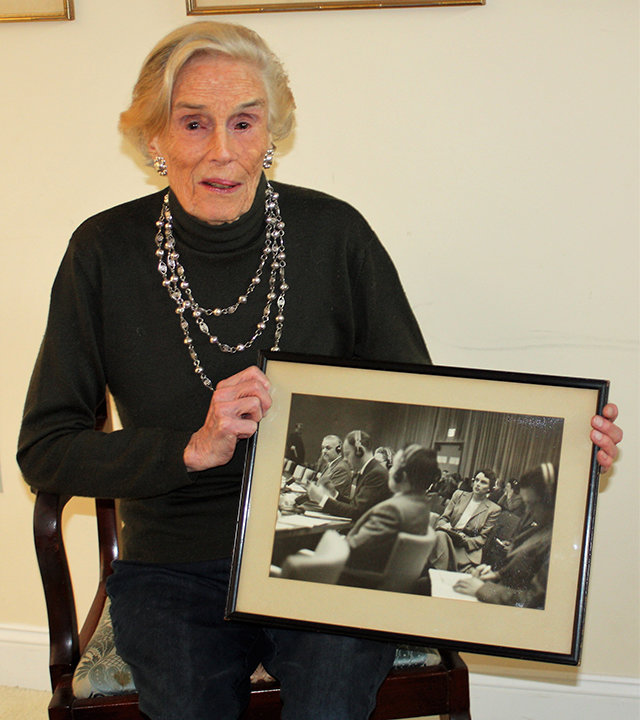 Ella Torrey, 91, a former Chestnut Hill resident who now lives in upper Roxborough, holds a photo of herself at the United Nations. Torrey was the Public Information Officer for Eleanor Roosevelt when she was a U.S. delegate to the U.N. (Photo by Sue Ann Rybak)

Ella Russell Torrey, who lived in Chestnut Hill for over 41 years before moving to Cathedral Village in Roxborough, has led an extraordinary life. Born on Aug. 7, 1925 in Philadelphia, she grew up in Edgewater Park, N.J.

Torrey, who spent her career working for international peace, recalled listening to President Franklin Roosevelt announce that the Japanese had attacked Pearl Harbor.

“It was December 7, 1941, Sunday,” she said. “My brother Louis, who was two years older than me, was shot down trying to rescue a buddy who had disappeared into the Pacific. He was listed as Missing in Action and declared dead at the end of the war and received the Distinguished Flying Cross posthumously. It was devastating to my family, but I once asked my father how he had coped, and he said he had been too young for World War I and too old for World War II, and he found great comfort in knowing that his son had died fighting for his country.”

Torrey said one of the reasons she spent over 50 years working for international peace was the fact that her brother had been killed in the war. She said she knew what it meant to lose someone you love to the ravages of war. However, when she graduated from the Agnes Irwin School, a private all-girls school in Radnor, “I didn’t know what I wanted to do. I looked at Vassar College, but I wasn’t the type to wear those sweet little collars.”

“The Rockettes were an interesting group,” she said. “They told me I had to go home and work on my wings (a tap dance move done on your toes). They said to come back and then they would probably hire me. The gal I went with joined the Rockettes and stayed with them for 30 years. I once took my grandchildren over and showed them the stage that I danced across when they made us try out. They couldn’t believe their grandmother had done that.”

The following week her father took her to Bennington College in Vermont, where a woman named Martha Graham taught dance. “For four years, I danced with Martha Graham,” Torrey said. “She once said to me ‘You have the body but not the soul. You’ll major in English,’ so I did.”

After graduating from Bennington College, she studied English at Penn. Despite her father’s efforts to persuade her, Torrey dropped out of school just six weeks before getting her master’s degree to move to Paris. “A friend of mine who ran a program in France asked me to come over, so I did.”

Later, Torrey got a job as a fashion editor for the Chicago Tribune. She recalled her interview with the “gruff old editor.” In an animated deep voice, she repeated the editor’s questions.

“Did you ever take a course in journalism,” he asked.

“Did you ever do any writing for a newspaper?”

“Oh, OK,” she said in an animated deep, throaty voice pretending to be the editor, “Well, you’re hired.”

After a few months of working for the Chicago Tribune, she got a job working for Al Misri, then Egypt’s largest daily newspaper. “They hired me to work with these seven Arab guys, who they knew needed help with their English. They were all from different Arab countries: Egypt, Tunisia, Saudi Arabia. My mother was so upset she flew over to see what was going on. There was nothing going on. They were all nice guys who cared a lot about what they were doing.”

When she returned home in 1949, she got a job working at the U.S. Mission to the U.N., a branch of the State Department in New York. Later she was named Public Information Officer for Eleanor Roosevelt, who had been appointed by President Truman as a U.S. delegate to the U.N.

“She took a lot of flack,” Torrey said. “Republican Sen. Arthur Vandenberg, of Michigan, called her an emotional rattle-brained woman. He later said he had eaten those words many times. Mrs. Roosevelt was very smart. Sometimes she would practice speaking if she were going to debate someone like Andrei Vishinski, a brilliant Russian ambassador. She was always well prepared. It scared the hell out of them.”

Then after the morning session, Roosevelt and Torrey would ride out to the Sperry Gyroscope Company’s Plant in Lake Success in New York, temporary headquarters of the United Nations from 1947 to 1952. “We would be driven out by our chauffeur named Claude. Eleanor had a great interest in everybody. She reached out to everyone.”

Torrey said Claude was trying to get on the New York Police Force. She said Roosevelt would always ask, “Claude, how are you doing on your test?”

‘“Oh, Mrs. Roosevelt,’ he would reply, ‘I pass the physical every time, but those mental tests get me,’ but she would always encourage him.”

Torrey said the U.N. meetings could “get awfully dull. The photographers were always waiting for someone to fall asleep. One of my major jobs was to sit behind her and when I would see her starting to fall asleep. I would take a piece of paper and make it look like it was very important, and that would wake her up. She would respond immediately.”

Torrey added that Roosevelt had a very good sense of humor. “The delegates would often say our meetings are too long, and she would often say in her quiet little way, ‘Well, if you want to have shorter meetings, make shorter speeches.’”

After the afternoon session, there was a reception. “Every country in the U.N. would host at least one reception a year. There was a joke that if you forgot who was your host at the reception … if you were getting champagne and caviar, you were being entertained by one of the new developing countries, and if you were getting Coca Cola and peanuts … the great USA was hosting you.

“I remember some nights she used to say to me, ‘Ella would you like to come down and have supper with me at the end of the day?’ I'd say, ‘Oh no Mrs. Roosevelt, I have a date tonight.”

Torrey said on Dec. 10, 1948, at 3 a.m., something happened that had never happened in the history of the U.N. before or since. All the delegates rose to give a standing ovation to a single delegate, Eleanor Roosevelt, who was chair of the United Nations Commission on Human Rights, after the Universal Declaration of Human Rights was unanimously passed.

“Mrs. Roosevelt used to always say that you find yourself by serving others,” said Torrey.