At 23, local jazz musician has 'an old soul' 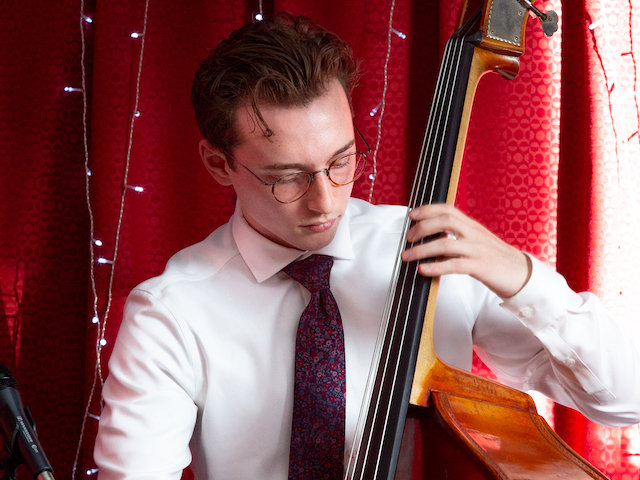 Bass player Bradford Neely and his quartet will be playing Bebop, both original compositions and classic sounds, this Sunday at Paris Bistro. (Photo by Margo Reed)

Neely, who grew up in Perkasie, Bucks County, graduated from Pennridge High School and Temple University's Boyer College of Music (2018).

As a teenager, Neely loved hardcore and metal music, playing in several rock bands, but “after being exposed to jazz and other forms of Black American music, it changed my musical tastes and my whole outlook on life.”

Once Neely, who now lives in West Philadelphia, was exposed to bebop, he became a passionate convert.

(Bebop is a style of jazz developed in the early to mid-1940s in the U.S., which features songs characterized by a fast tempo, complex chord progressions with rapid chord changes and numerous changes of key, instrumental virtuosity and improvisation. Bebop, some of whose most prominent exponents were Charlie Parker, John Coltrane and Thelonious Monk, developed as the younger generation of jazz musicians expanded the creative possibilities of jazz beyond the popular, dance-oriented swing style with a new sound that was not danceable and demanded close listening.)

“Bebop, to me, is a joyous music,” said Neely in an interview this week. “The feeling it expresses is pure freedom. I aim to carry that feeling over into my own playing.”

“Miles Davis inspires me to look ahead and to keep pushing for an original sound,” he said. “Ornette Coleman reminds me to never forget the blues and inspires me to make everything I play a beautiful melody. Joe Henderson inspires me to bring all my energy to the bandstand and leave it all out there every time.”

Neely and his quartet also use each gig as an opportunity to showcase their own original music.

“Our goal is to mix our personal influences together by playing our own compositions and our favorites from the past. Building our repertoire a little more each time allows us to create a strong feeling and a unique sound together. This particular concert at Paris Bistro will be about one-third our original music.”

Neely and his quartet have played at Paris Bistro before as well as Chris' Jazz Cafe and Heritage.

Since it is very difficult for a young jazz musician to make a living as a full-time musician, Bradford works as a cook in a breakfast/lunch restaurant, Middle Child, 248 S. 11th St., in the daytime while he plays music at night.

What is the best advice Neely ever received?

“To keep working regardless if you're motivated or not. Learn to be stronger than inspiration.”

Which talent that he does not have would he most like to have?

If Neely could meet and spend time with anyone on earth, who would it be?

“To know Ron Carter well would be a blessing. Hearing the stories and experiencing the wisdom of the most recorded bassist in history is a dream of mine.”

Neely also said he would like to take this opportunity “to thank my whole family for teaching me the importance of sharing love through music and for always supporting me in that.”

For more information about the Sept. 15 performance, visit ParisBistro.net or call 215-242-6200. You can reach Len Lear at lenlear@chestnuthilllocal.com

Mt. Airy scientist to speak at SCH on conservation crisis