This is the proposed memorial to Dinah, the slave who saved Stenton, by artist La Vaughn Belle. by Constance Garcia-Barrio In recent months, Northwest Philadelphia has taken up the gauntlet in … 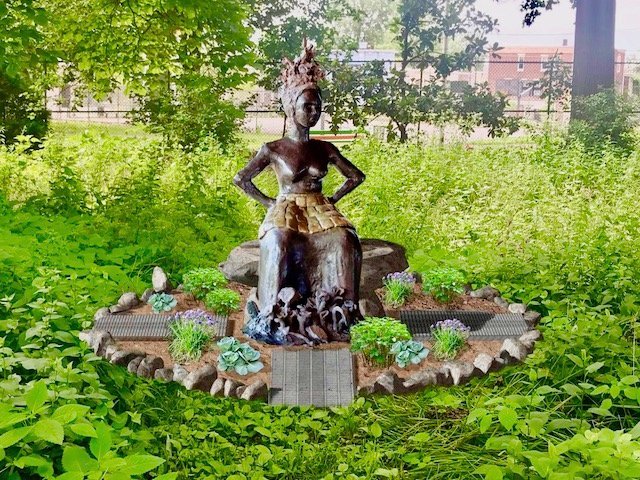 This is the proposed memorial to Dinah, the slave who saved Stenton, by artist La Vaughn Belle.

In recent months, Northwest Philadelphia has taken up the gauntlet in representing women of African heritage in its history. Reenactments this year of life at Cliveden, 6401 Germantown Ave., have included the perspective of black women down the generations who cooked, washed clothes and cleaned windows at the Chew family mansion. In the 1700s and 1800s, such women seldom had the leisure or learning that would have allowed them to leave a written record of their lives. Their contributions, though silent, kept the house going.

The Chew family papers, comprised of more than 200,000 documents, give hints of how these women, some of them enslaved, lived. E. Tilghman, apparently an overseer who worked for the Chews, set down “Rules for cloathing and feeding negroes” in 1772. “The women to be clothed with petticoat and waistcoat made of best Welch cotton or country cloth … the petticoat only seamed in the common way,” the document says. Tilghman makes one concession: “ mattress of straw or chaff … be changed after childbirth.” Reprinted in “History Hunters Youth Reporter Program Student Workbook,” Tilghman’s recommendations allow school-age readers to better understand the lives of enslaved women.

On Sept. 14 at Stenton, 4601 N. 18th St., the Northwest made another long stride toward inclusion by presenting the Dinah Memorial Project artist finalists. Curiosity about the artists themselves and their view of Dinah, the black woman said to have saved Stenton from destruction, took me out of my house to the historic property with its beautiful garden and meadow.

The story goes that Dinah, a former slave of the Logan family who was freed by them in 1776, had been left in charge of the palatial house. Soon after the British won the Battle of Germantown in October 1777, a pair of British soldiers knocked on Stenton’s door and told Dinah, the housekeeper, that they meant to burn down the house. The soldiers were in the barn gathering straw to start the fire when British officers rode up and asked Dinah if she’d seen deserters.

“Yes,” she said. “Two are hiding in the barn.” The officers arrested the soldiers and took them away, thus saving Stenton, according to the story. Dinah has a plaque in her honor at Stenton, and she’s included in a mural on the north wall of the historic YWCA, 5820 Germantown Ave.

The plaque describes Dinah as “the faithful colored caretaker of Stenton.” 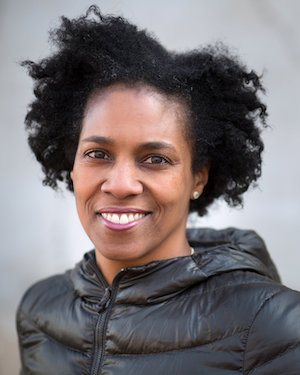 Karyn Olivier, a Germantown resident whose work one can see in Vernon Park, presented a memorial that included benches where one could sit and consider questions about Dinah’s life.[/caption]

Three finalist artists were invited to present their proposals for a more contemporary and evocative memorial to Dinah. I cheered to myself when I saw that the finalists were all women of African heritage. Granted, artists of all kinds – playwrights, poets, painters – cross boundaries of race, class, gender and other differences in their work – but I felt delighted to see three black women at the podium. I felt that they could come closer to Dinah’s life and perhaps imagine her more deeply.

The first artist, La Vaughn Belle, strove to “make visible the unremembered” with the bronze sculpture she proposes. Belle presented a figure of regal presence whose bare breasts raised objections among some of the guests, but didn’t trouble me. The design includes references to African and Native American cultures.

Everyone had a paper on which to take notes and anonymously write down a score for each artist. If Belle’s work gets the most votes, her Dinah figure will add to the few statues of individual black females among Philadelphia’s 1500 public statues. (The first one of a solo black girl was unveiled in July at North Philly’s Smith Playground.)

Kenturah Davis’s proposed memorial consists of a face drawn or etched on glass. The glass itself has words pertaining to Dinah and her life, which you can see, depending on how the light falls. The face is turned away from the viewer to convey that we can’t really know this woman. I liked the originality of the glass medium and the words that would require me to come closer, but the averted face struck me as too much of a barrier.

Finally, Karyn Olivier, a Germantown resident, presented a memorial that included benches where one could sit and consider questions about Dinah’s life:

All three women portrayed Dinah with thought and respect, and I felt drawn to both Belle’s and Olivier’s work. I’m eager to see what most people preferred. No matter who gets the most votes, the memorial will mean a win not only for that artist but for the Northwest as it stretches toward a more inclusive respectful retelling of its past.

Constance Garcia-Barrio, a longtime Mt. Airy resident, is a freelance writer for several area publications and a retired professor of Romance languages at West Chester University.

Yarn art on the Hill: Stronger Together