Sandy Day, whose stunning paintings are currently on display at LeBus, Ridge and Midvale Avenues in East Falls, has been president of the Delaware Valley Opera Company for the past 20 years. by Len … 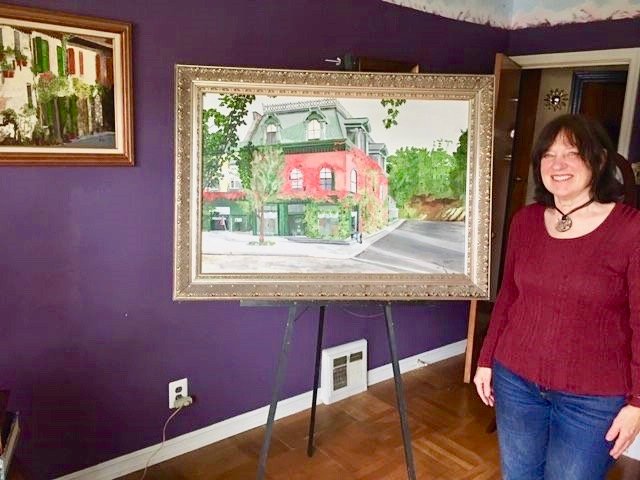 Sandy Day, whose stunning paintings are currently on display at LeBus, Ridge and Midvale Avenues in East Falls, has been president of the Delaware Valley Opera Company for the past 20 years.

Most creative people would no doubt be elated to achieve a high level of skill in one discipline, but Sandy Day is one of those rare people who has achieved an elevated level of talent in both music and art.

Day, whose paintings are currently on display at LeBus, Ridge and Midvale Avenues in East Falls, has been president of the Delaware Valley Opera Company for the past 20 years.

Although she has not been on stage herself for several years, Sandy previously performed many of the leading soprano roles in the operatic repertoire such as Tosca, Madame Butterfly, Manon, Amelia in “La Forza del Destino,” Violetta and many more.

When asked her age, Sandy replied, “That is something I do not like to broadcast, so I will remain silent.” Sandy grew up in Missouri but wound up at the University of Pennsylvania, studying there while working in order to allow her husband to get his PhD. She spent 20 years in private vocal study in Philadelphia, New York and France.

Although Sandy never received a formal education in art school, she was working in the Architecture School at the University of Pennsylvania and watched how the drawing instructor taught his students.

“It was ‘use a pen and go out and draw it,’” she recalled, “so I decided that I wanted to try that, and I loved it. When I went to France for the first time, I did a lot of drawing there and found that I was able to sell many of these drawings. And I’ve been drawing and painting ever since.”

Sandy lived in France for three years, although not consecutively. She calls her time in France “spectacular ... I was able to do many things that I would never have done here. For example, a 2,500-mile bicycle trip in 53 days; working as a migrant worker doing the grape harvest; teaching canoeing in a youth camp along the Tarn river; pursuing my vocal training, etc.”

Sandy has taught at the Maplewood Music Studio in Germantown for 25 years and at Ancillae Assumpta Academy in Wyncote for almost the same amount of time as a voice teacher.

Who are Sandy’s own favorite artists, past and/or present, opera singers and composers?

“It is almost impossible to choose ... but I will give it a go. My favorite soprano is Magda Olivero. She has a technique to die for and a pathos in her singing that can pull on your heartstrings until the emotion is almost too much to handle ... I must also mention Franco Corelli, who I had the fortune of being coached by for the role of Amelia in ‘Un Ballo in Maschera.’”

In art, Sandy's favorites are “the Impressionists and Realists.

“I relate to Utrillo in particular. I love his freedom of expression and his use of color. All of his street scenes of Paris grasp the essence of Paris in a very special way. He also was self-taught, which inspired me and gave me the confidence that I could possibly become an artist.”

Here is a typical comment among the many testimonials from art lovers who have purchased Day’s works over the years:

“I own several of Sandy’s works, both etchings and oils. Her subject matter is serene and lovely and blends well with the oriental pieces I have. Her acrylics show a wonderful command of color and technique. I gave several of her pieces as gifts, and the recipients loved them. I am always excited to see her new creations!” said attorney Carol Denenberg, of Wilmington, Delaware.

When asked “What gives you more satisfaction, art or music, or is that a dumb question?” Sandy replied, “Dumb question. That's the apple and orange question!”

What was the hardest thing Sandy ever had to do?

“The very hardest thing I had to do I would rather not talk about, but the most difficult thing I ever did physically was to go through four mountain passes in the Pyrenees in one day!”

What is the best advice Sandy ever received?

Although Sandy has excelled at opera singing and art, “downhill skiing has been something that I have tried to pursue and failed miserably. I would love to sail down the slopes as free as can be and enjoy the beautiful surroundings.”

Sandy, who now lives in Rhawnhurst, also wanted to take this opportunity to mention her parents, “who were both musicians, especially my father.

“He started as a pianist but in his teens switched to the double bass. He performed for President Roosevelt in Warm Springs and played with the Glenn Miller Orchestra after the loss of Glenn Miller. He played with most of the famous singers around during the ’50s, ’60s and ’70s. My mother was a blues singer and traveled with my father as a singer until my brother was born, and they settled in the suburbs of St. Louis.”