Springside alumna and documentary filmmaker Katrina Browne and a Ghanaian child look out over the ramparts of Cape Coast Castle in the West African nation of Ghana, a fortress from which slaves were … 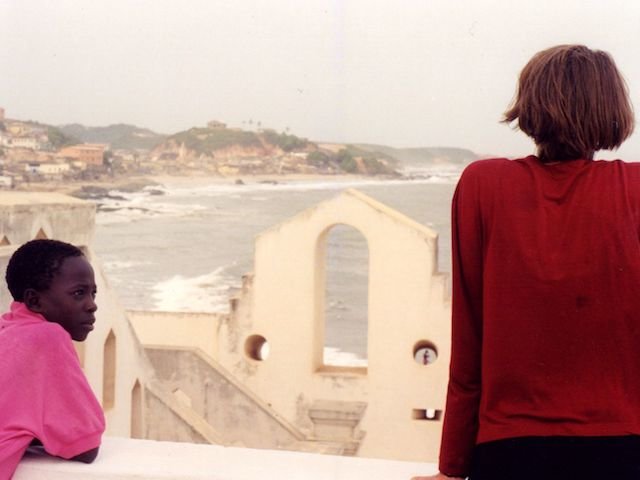 Springside alumna and documentary filmmaker Katrina Browne and a Ghanaian child look out over the ramparts of Cape Coast Castle in the West African nation of Ghana, a fortress from which slaves were shipped to the U.S. and elsewhere. (Photo by Elly Hale)

Many of us have family members or even ancestors with which we are not too proud. But for Katrina Browne, it goes way beyond that. Browne, 50, graduated from Springside School (now Springside Chestnut Hill Academy) in 1985. Her mother, Elizabeth (“Libby”) Sturges Browne, grew up in Chestnut Hill, as did Libby’s father, the Rev. Philemon Sturges, who was rector of St. Martin-in-the- Fields Episcopal Church. (Elizabeth and her sisters also went to Springside.)

Browne's grandmother, Rosalind Howe Sturges, a renowned artist, created the Chestnut Hill Local masthead drawing in the early or mid-1960s that is still used today. She also did many drawings and pictorial maps of the area. The Chestnut Hill scenes of places she memorialized before they were destroyed can be found at the C.H. Historical Society.

Browne earned a degree from Princeton University in Anthropology in 1990 and an M.A. in Theology from the Pacific School of Religion, where she wrote a thesis on film and democratic dialogue. “I wasn’t pursuing ordination (to the ministry),” she told us last month, “but I was seeking my next 'calling' after having worked really hard in my early 20s co-founding one of the first national AmeriCorps programs called Public Allies. It is still going strong, and Michelle Obama was the founding director of the Chicago office/program site.”

In 1995, however, Browne's grandmother, who was then 88 (she died in 1999), wrote a short booklet summarizing their family history for all of her grandchildren. What she wrote was a virtual stick of dynamite that blew up Browne's world and set it on a totally different path that has continued to this day. “I am so grateful that she didn’t fail to include this horrible part of our story,” said Browne. “It was a sacred act on her part as an elder.”

What the booklet revealed was that the Sturges' ancestors, the DeWolfs, were the largest slave-trading family in U.S. history! Given the myth that the South is solely responsible for slavery, family members were shocked to learn that their ancestors, Northerners from Rhode Island, were so deeply involved in the slave trade. Browne and her relatives learned that while the DeWolfs were one of only a few "slaving" dynasties, the network of commercial activities that they were tied to involved an enormous portion of the Northern population. 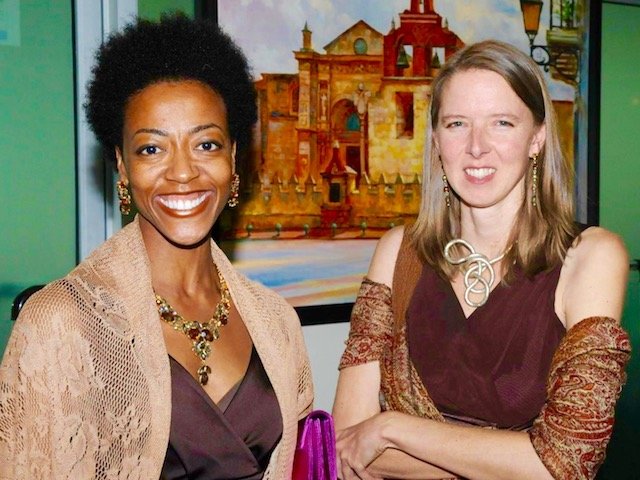 Katrina Browne (right) and co-producer Juanita Brown are seen at the U.S. Embassy in the Dominican Republic, which asked them to come and screen their powerful documentary film.

“I was shocked and devastated ... and incredulous, given that they were from Rhode Island,” said Browne. ”It didn’t compute. But then, within a few moments, I had a second shock, realizing that I actually already knew this about our family and had buried it. I went within a few minutes from thinking I was finding out for the first time to realizing I used to know and had repressed it. Too painful.”

Now, Browne could have simply felt guilty or worse, although she was clearly not responsible for something, no matter how depraved and reprehensible, that happened many generations ago, and gone on with her life. But she did not. Instead, she initiated the production of a documentary film, “Traces of the Trade: A Story from the Deep North,” about her own ancestors' involvement in the slave trade, in 1999. Browne was the producer, director and writer, although several hundred people shared their talents as part of the filmmaking and dialogue process over nine years. While still in rough-cut form, the film contributed to the Episcopal Church’s 2006 decision to atone for its role in slavery.

The film follows Browne and nine of her cousins on a remarkable journey that brings them face-to-face with the history and legacy of New England's hidden enterprise. They retrace the Triangle Trade from their ancestral home in Bristol, Rhode Island, to Ghana, West Africa, to the family plantations in Cuba. The film highlights the struggle of the family as they confront the thorny topic of what to do now. The film establishes without any doubt that although slavery is almost always associated with Southern plantations, it was also a cornerstone of Northern commercial life.

At each stop, the family grappled with the contemporary legacy of slavery, not only for black Americans but also for themselves as white Americans. Browne pushed her relatives forward as they made their way through the minefield of race politics and debates about reparations.

The film was selected to be shown at the coveted Sundance Film Festival in 2008. “We didn’t win any awards there,” said Browne, “but getting selected to be in competition at Sundance was a prize unto itself. It opened a lot of doors and led to our 2008 PBS broadcast on the POV series.” The film also received an Emmy nomination in 2009. 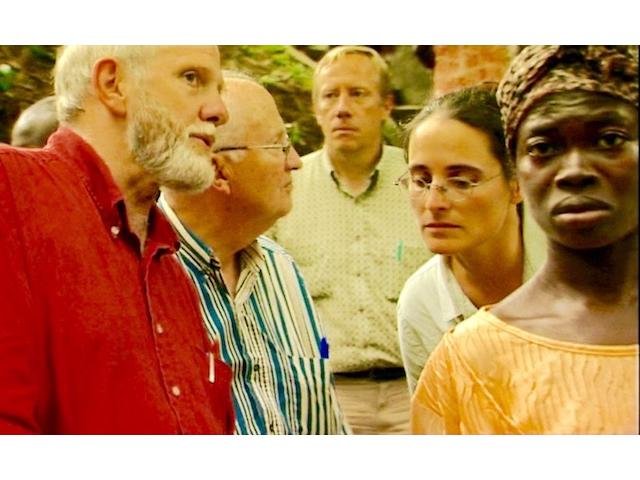 DeWolf family members and a Ghanaian, Beatrice Manu, are seen at a river ceremony in Ghana where captured Africans were brought for a last bath before being shackled and taken across the Atlantic Ocean. (Photo by Amishadai Sackitey)

“I took classes on producing, directing, scriptwriting, fundraising, etc.,” said Browne, “and a lot of those skills were actually transferrable from having done a non-profit start-up. Also, I knew I wasn’t going to try to do the camera work or editing myself, that I would rather raise funds and hire talented folks. I worked with many amazing people, including a lot of great women filmmakers.”

Ms. Browne has spent the years since then taking her film to religious, educational and corporate communities around the U.S., in the Caribbean and in Europe. How many schools and other institutions has Browne shown the film to over the last 10 years? “I should have counted and kept track, but I haven’t! You can get a feel and count if you like at www.tracesofthetrade.org/screenings. And there have been countless other screenings that happened without me or other family members present.”

On Aug. 15 of this year Browne presented her courageous, groundbreaking film at Cathedral Village in upper Roxborough to a standing-room- only audience of about 80, followed by a lively discussion.

What does white America owe, if anything, to the descendants of slaves? “I feel we owe, at the very least, an undefended heart. In other words, we owe the practice of deep listening and empathy without getting hung up in our own defense mechanisms, judgments, guilt, etc. As is human nature, we make it all about ourselves, but if we could be open to really taking in the pain from the past and the present, then we could actually grieve together and see each other eye-to-eye.”