An agonizing day in the life of a local cat rescuer

“One person left me a message saying that she wanted to adopt a kitten because they just got ‘rid of their old cat’ and wanted a newer young one. I have learned to take many deep breaths while …

An agonizing day in the life of a local cat rescuer 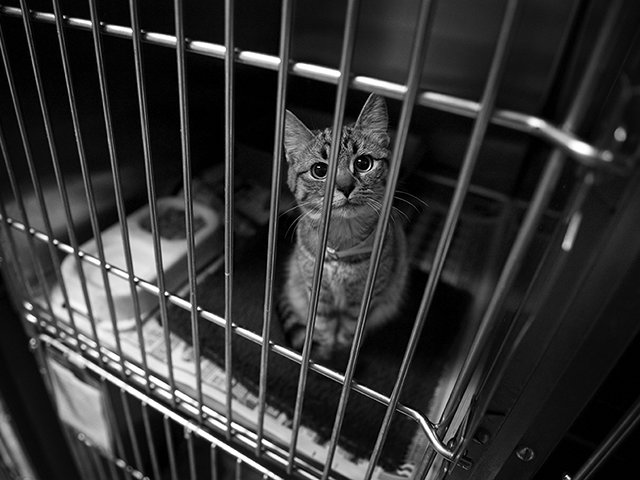 “One person left me a message saying that she wanted to adopt a kitten because they just got ‘rid of their old cat’ and wanted a newer young one. I have learned to take many deep breaths while dealing with the public.”[/caption]

On any given day I wear many rescue hats — psychologist, negotiator, educator, juggler, accountant, cleaning lady, transporter, administrator, publicist, marketer and some that are too complex to categorize.

My day job takes me to one of the poorest and grittiest areas of the city, where I encounter an endless stream of stray animals. A few years ago, after decades of putting out my own funds for vet care, food and supplies, I became an official tax-deductible non-profit, BrendasCatRescue.  Friends set up a web & Facebook page, and I was off and running “officially” (even though I rescued my first cat 57 years ago). I haven’t stopped running since.

When I wake up in the morning, before I go to my “paying” job, I do my volunteer jobs — clean the litter, feed the cats, do medications, change the bedding, wash the dishes, clean up any vomit   and any tasks for cats needing specialized care — antibiotics, pain meds and wound management.   After feeding, comes computer work — reading and responding to dozens of emails from people asking me to rescue a stray on their street; to take a cat they no longer want and/or folks informing me about all the sick and injured cats they have encountered and are in desperate need of help. I answer each one. Next is filing — invoices, records, applications, agreement. If we have received any applications, they need immediate processing, which involves doing background/criminal/employer checks, verifying housing status, calling vet and personal references.

When I check my phone, I  listen to many desperate voices pleading for help to take their cats, or for me to come trap cats in their yards or at their place of employment or just about anywhere that people see cats during their day-to-day activities. I recently had a call from a woman wanting me to come take the 25-30 cats that her sister keeps in one room and which are breeding.  Another person wanted me to come take their feral colony since they (the people, not the cats) are moving. One person left me a message saying that she wanted to adopt a kitten because they just got “rid of their old cat” and wanted a newer young one. I have learned to take many deep breaths while dealing with the public.

I would like people to understand that private animal rescues operate because people took it upon themselves to try and solve a problem. We are not supported by the city or state. I run my rescue voluntarily, and I am not paid for the time I spend rescuing/caring for the many cats. I am not a public servant, and no, you cannot speak to my supervisor when I refuse to take the cat you wish to surrender.

I wish that running a rescue did not demand so much administrative time. Details and dates and appointments are always swirling in my overcrowded brain. Needs and requests never go away.  On weekends, twice a month, volunteers and I haul cages, fabric, banners, street signage, paperwork and cats in carriers to adoption events. At the day’s end, all the cages have to be washed/disinfected and everything else put away until everything is again pulled out two weeks later for the next event.

Trapping is a component of rescue, of course, and it has its risks and rewards. Trapping is usually done where there is a concentration of cats/kittens. Trapping requires skill, strength (a trap with a cat inside can be quite heavy), and one needs a lot of patience. Traps are expensive to buy and thus have to be identified and properly prepared to hold a cat inside for a day or more.

Trapping can be stressful and full of surprises (in the neighborhoods where we usually trap), including dealing with people who are high on drugs and intent on helping catch the cats with their hands and who shout and scare the cats (and me, too, sometimes). However, nothing is as scary as when gunshots are fired in the area in which traps are set. Once, I had my phone stolen out of my jacket pocket when putting an injured cat into a carrier; men often approach me thinking I am in the neighborhood looking to buy drugs; some people are suspicious of me and think I am an undercover cop. One time, I heard a woman tell her drug dealer, “She doesn’t want to buy anything; she just wants cats.” Trapping, for me, is an adrenaline high and extremely satisfying, especially when you trap injured, pregnant, sick or suffering cats.

Just last week BCR trapped several badly injured cats. One cat had a horrible tail injury; one had a severe eye injury and upper respiratory infection; one had a terrible skin condition that sealed his eyes shut; one was limping badly, and we learned from the guy dealing drugs that the cat  had been hit and dragged by a tow truck almost one month ago; we found one very starved, dehydrated and sick cat that was trapped in a box; and another one who was bleeding from a deep gash across her back.

The care of these cats is not only costly but also intense and time-consuming. Arlo needed to be given subcutaneous fluids and hand-fed for five straight days; Maurice needed X-rays and daily soaks of his swollen and infected feet; Wes needed a tail amputation, and his recovery will take a month; Massy will need weekly treatments for his skin condition for at least five weeks; Magpie and Greyling are on antibiotics and ointments for their wounds. Without a physical space, we are always desperate for places to keep our rescues. Sometimes we run out of space in our homes, and we have nowhere to recover or even house cats. It is a constant struggle to find space and to get more adoptions so that more space becomes available.

Back to trapping. When a cat is in a trap, it is next to impossible to determine if it is feral (unsocialized), terrified or in pain. I have to make hard decisions on whether to have a cat euthanized or spend the time and money and whether our volunteers or I have the skill to recover a cat based on its wounds and personality. Any injured, scared, caged animal can be a very dangerous animal. I’ve learned that rescue is far from sitting around playing with cute kittens.

I wish I had a dollar for everyone who has told me that there is a place in heaven for me. What I’d like to see before I go to my final destination is people who will be proactive when they encounter an animal in need; making phone calls or sending emails and hoping that someone else will solve the problem is not the solution. Education is the solution, as is sterilization of all animals. Stricter laws for abandoning or hurting animals is the solution. There is no reason for animal breeders to exist while other animals are dying in shelters.

My life belongs to the animals. I’ve never been happier. I wouldn’t have it any other way. BCR is always looking for foster homes, volunteers, donations and of course, adoptions.

For more information, visit brendascatrescue.com, which is based in upper Roxborough. This article is being reprinted, with permission, from The Shuttle, the monthly newspaper published by Weavers Way in Chestnut Hill and Mt. Airy.