In March of 1987, I was a 22-year-old Peace Corps trainee, recently arrived in Thiès, Senegal. West Africa, where I planned to spend the next two years. Over the next two decades, Oumar and I always managed to see each other every few years. I 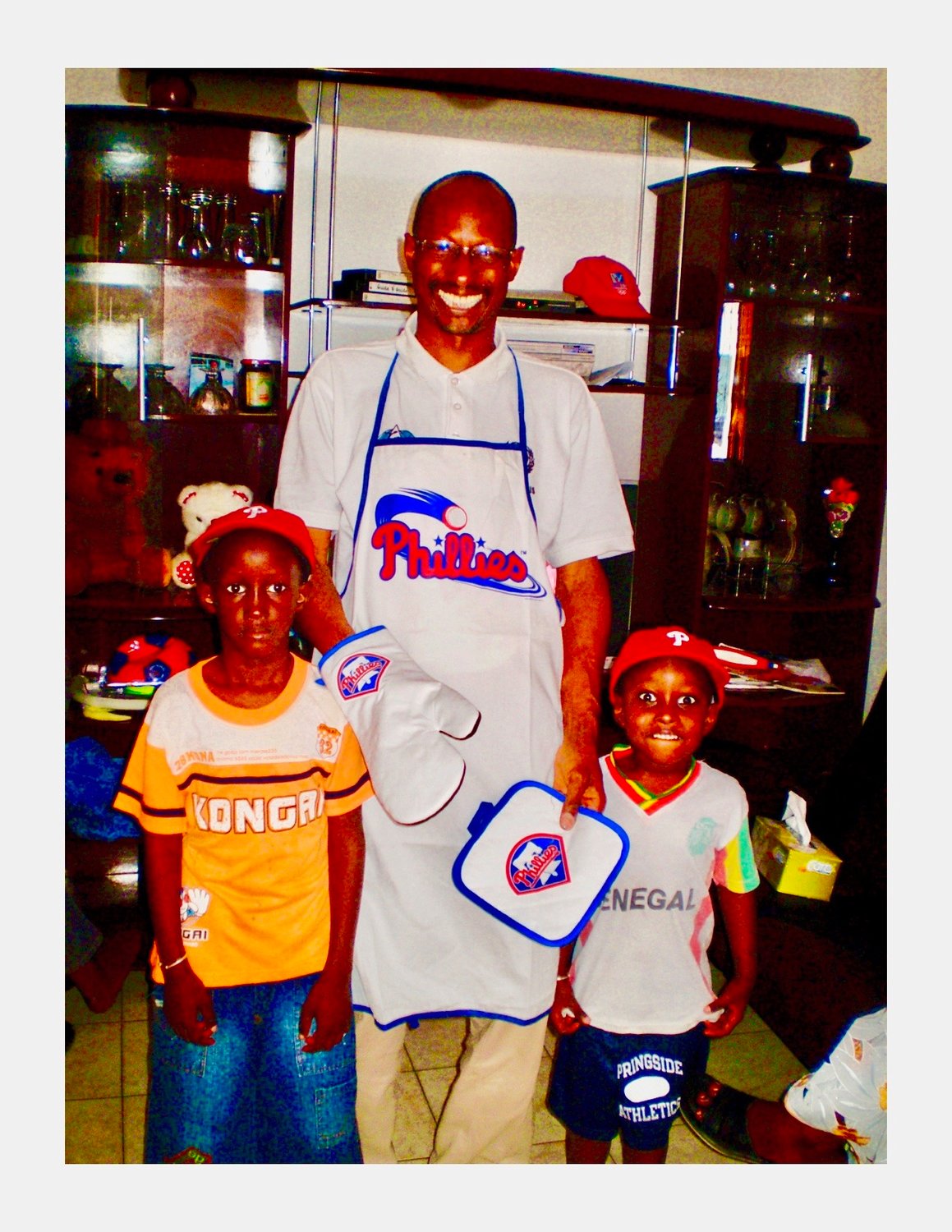 Thierno, Oumar and Idy Watt are seen with gifts from their Philly friends at their home in Dakar, Senegal, in 2009.
Posted Wednesday, August 25, 2021 9:00 am
by Amy Cohen

In March of 1987, I was a 22-year-old Peace Corps trainee, recently arrived in Thiès, Senegal. West Africa, where I planned to spend the next two years. The first day of in-country training began with an icebreaker. Peace Corps volunteers and language instructors were told to come up with suitable adjectives with the same first letter as their name. I chose to be Amiable Amy; I still recall some others such as Curious Curt, Mysterious Mona and Just Jim.

When it was the turn of a tall, skinny and very smiley Senegalese man, he introduced himself as Callaghan Space Cadet. I should have known right then and there that while part of the job of our language instructors was to acclimate us to Senegalese culture, Callaghan (aka Oumar Watt) was absorbing at least as much from this group of young Americans as he was conveying to us about his native land. “We had a blast” was one of his favorite phrases, and he repeated it often in an amused staccato.

After I left Senegal and returned to the U.S., Oumar, then a language trainer at the U.S. Embassy in Senegal, visited America for the first time. In the fall of 1988, Oumar spent a few weeks with my roommate and me in a basement apartment in Washington, D.C. He arrived at night, and the next day he was too frightened to venture out while I was at work. “It’s OK,” he told me during those pre-cable days, “I’ll just stay here and watch all three TV channels!”

A few more “Oumar Coming to America” stories: The first weekend of his visit, my roommate, also a Returned Peace Corps Volunteer (RPCV), and I threw a party for our fellow Senegal RPCVs to welcome Oumar to our country. Before the party started, he wanted to go to Rite Aid to buy film for his camera. I told him where to go: a straight shot down 17th Street in our neighborhood. After about an hour, guests started to arrive, and Oumar had still not returned. Concerned, my roommate went to the Rite Aid. He found Oumar wandering the aisles, overwhelmed by the vast array of choices offered in an American drug store.

Having heard so much about McDonald’s, he stopped in one day and ordered a hamburger. He noticed that other customers had cheese, lettuce, tomato, pickles and onions on their sandwiches. He thought that he’d been served less because he is African. No, I explained, you need to order a Quarter Pounder or Bic Mac if you want more than a burger and a bun.

A more disturbing story. One day he left through the back door of our apartment to borrow a boom box from a pair of RPCVs who lived across the alley. After he returned, he heard knocking on our front door. Home alone, he opened the door to find nine D.C. police officers, guns drawn, questioning him about who he was and what he was doing in our apartment.

In spite of that experience, Oumar came back to Washington, D.C. in 1990. A trip highlight was meeting Mayor Marion Barry at a block party. Oumar is a few years older than I, and our lives have followed similar trajectories. I moved home to Philadelphia, got married, had two kids and became a social studies teacher. Oumar married, had three children and continued to work high level positions at the U.S. Embassy and to accumulate real estate around Dakar, Senegal.

Over the next two decades, Oumar and I always managed to see each other every few years. I visited Senegal as a group leader for Operation Understanding, a leadership development program that sent groups of African American and Jewish students to visit Senegal and Israel. Oumar was promoted from language instructor at the U.S. Embassy to Media Affairs Specialist. As such, Oumar was charged with all press relations for American officials living in or visiting Senegal. His big last event was the press coverage of President Barack Obama's visit to Senegal in July, 2016. Oumar was also charged with leading tours of the U.S. for West African journalists. He always made time to visit my family in West Mt. Airy and was a guest several times in my World Geography and African American History classes at Masterman School.

During spring break of 2009, I traveled to Senegal with my close friend Stephanie Kasten, a teacher of French at Springside Chestnut Hill Academy (SCH) who hoped that offering a trip to Senegal, a Francophone nation, to students of French would stimulate additional interest in the language. We spent our first few nights with Oumar and his family, and he advised her as she planned two trips for her SCH students.

Fast forward to summer ,2017. Oumar retired from the U.S. Embassy after 32 years of service to the U.S. government and took advantage of the green cards that were available to him and his family. He sold some of his Dakar property, bought a plane ticket and moved to Bloomington, Indiana, an affordable place to live with a small Senegalese population.

Meanwhile Stephanie Kasten, then World Language chair at SCH, had a French teacher resign mid-summer. Kasten had an idea. She was convinced that if she hired someone dynamic, warm, amusing and great with kids to teach middle school French, she would have a group of students locked in to continue French in high school. So she called Oumar.

Although Oumar was already in Bloomington, he loved the idea of coming to Philadelphia, a city he had gotten to know well. So Mr. Watt began teaching middle school French in September, 2017. He was an instant hit. He rented a room in the Chestnut Hill home of William Penn Charter School math teacher Becky Miller and saved money to bring the rest of his family over to join him. Much to Oumar’s delight, we ran into Mayor Kenney at a WHYY event, fulfilling a goal he’d had since arriving in Philadelphia.

In the summer of 2018, Oumar’s wife, Aissata Ba, sons Thierno, 15, and Idy, 13, and daughter, Aida, 6, joined him in Philadelphia. At that point, Aissata and Aida spoke no English; Thierno and Idy spoke very little. All five lived in an apartment on Haws Lane in Flourtown, and the three kids enrolled in Springfield Montgomery County public schools. Coming full circle, Watt and Kasten co-led an SCH trip to Senegal in December, 2019.

Within a year, Oumar had saved enough to buy a four-bedroom house on Church Road in Erdenheim. Thierno graduated from Springfield High School in June and will begin his freshman year at Ursinus College this month. He has worked at both Rita’s and CVS in Flourtown. Idy is a rising junior whose English progressed quickly enough that he was able to transfer from Springfield to SCH, where he plays basketball and soccer. Aida, similarly, started at Enfield Elementary School and is about to start third grade at SCH. Her English is flawless, and she has convinced her parents to let her have a hamster and two guinea pigs. Perhaps most remarkable of all, Aissata is now employed as a food service worker in the Springfield public schools, still not fluent but managing quite well in an all-English workplace.

In these days when our nation is so divided, the Watts embody what most of us still think of as the American Dream. If you happen to see Oumar in Northwest Philadelphia or the adjacent suburbs, just say “Hi there, Space Cadet.” I guarantee you will be rewarded with a big smile and hearty laugh.