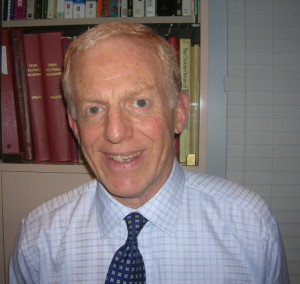 Dan Rottenberg, author of "The Outsider."[/caption]

As European immigrants reshaped American cities like New York and Chicago in the late 19th century, Philadelphia remained largely untouched – happily in the control of a wealthy, Protestant political system in no hurry to see itself displaced by newcomers. The ethnic Democratic machines that were taking power in these other cities were nowhere to be found at Broad and Market streets.

That would change, thanks to a Russian-Jewish immigrant named Albert M. Greenfield, who would, almost single-handedly, displace that Protestant establishment through a remarkable mix of business and political dealings in the early 20th century. Greenfield not only would reshape the city's politics but would literally reshape the city's physical appearance as a banker and real estate speculator who built some of the city's most iconic buildings.

Greenfield's remarkable story – which in large part has much to do with the remarkable 19th century story of-Philadelphia – is told in a new biography by Philadelphia journalist and author Dan Rottenberg, called “The Outsider” (Temple University Press). Rottenberg will appear at 7:30 p.m Thursday, Oct. 9, at Chestnut Hill College's Sugarloaf Center, 9230 Germantown Ave. The talk will amplify an interesting final chapter of Greenfield's life when he lived in Chestnut Hill at Sugarloaf with his third wife, Elizabeth, from 1953 until his death in 1967.

Rottenberg first encountered Greenfield as the subject of a Philadelphia Magazine piece he wrote in 1976. At the time, Greenfield's business empire was in the final few years of collapse. Despite its size, it did not have the sort of corporate structure that would keep it running well after its founder's death.

At the time, Rottenberg – who has authored books on other city notables like Anthony Drexel – said, he didn't think Greenfield warranted much more than the magazine piece.

“When I write a book there has to be some larger point to it other than just writing about someone's life,” Rottenberg told the Local in a recent interview. “Originally I hadn't seen that in Albert Greenfield.”

But several other threads that interested Rottenberg suddenly began to take shape, and soon Greenfield's life would become the perfect narrative around which to show how those threads worked in Philadelphia and America in general.

“I was interested in two ideas,” Rottenberg said. “One was how Jews have changed business in America. The other was the decline of the Protestant establishment in America. About three years ago Temple University Press asked if I'd like to write a biography of Albert M. Greenfield, and I suddenly realized, gee whiz, this guy's story really ties into both of these subjects.”

Rottenberg's biography begins with Greenfield's earliest days. Avrum Moishe Grunfeld was born in 1887 to a dry goods trader in a remote village in what is now the Ukraine. He would move with his family, first to New York and then to Philadelphia where his father, Jacob, found a job ironing shirts. Later, Jacob would own and operate a series of grocery stores in Philadelphia, one over which the Grunfeld family lived.

In young adulthood, Grunfeld, who would soon change his name to Albert Greenfield, found work as a deed recorder for real estate companies, where his excellent memory and mind for details made him stand out to his peers and employers. In 1905, at the age of 18, he started his first real estate company with money he borrowed from his mother. Within 10 years, he'd be a multimillionaire. His was the American story of which ambitious immigrants dreamed.

“The Outsider” shows that Greenfield's business appetite seemed to know no boundaries. He was an early pioneer in merging real estate development and finance. And there was never an investment he didn't like, from hotels to movie theaters to newspapers. In his lifetime he was both the owner of the what was the largest real estate company in the country in the 1920s and the operator of the City Stores Company, which he expanded into a 20-location department store empire in his later years.

“There's nothing comparable today in Philadelphia,” Rottenberg said of Greenfield's business assets. “Albert Greenfield is really unique. He had tremendous guts and tremendous brilliance and a computer-like mind. A skill for reading people – he could get them to do what he wanted through charm or bullying. He was an empire builder.” 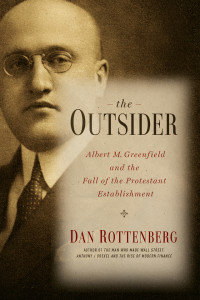 "The Outsider" tells the story of Albert M. Greenfield, who reshaped Philadelphia's political and architectural landscape.

But what made Greenfield so big, was that he was not simply satisfied to succeed at business. He had a hand in nearly every important 20th Century development in the City of Philadelphia It was in politics that Greenfield would do the most to unseat the Protestant establishment that had for so long controlled the city.

In Philadelphia, unlike other cities, there were fewer immigrants than those who came to places like New York, Boston, Chicago, Baltimore and other big cities,” Rottenberg said.“The Protestant upper class maintained control of both the social and economic life of this city long after the political life of other cities had been taken over by Democratic machines. Here was a Republican machine that was run by men with names like Quay and Vare and Penrose. In Philadelphia, more than other cities, who your parents were was much more important than anywhere else.”

But nothing seemed to disagree with Greenfield more than the concept that you were born into your station. He did not write off his Jewish heritage, but he was very much interested in being American and would constantly compare himself to Benjamin Franklin.

“Greenfield liked to say, 'This isn't the old world; it's the new world. I can define myself any way I want.'” Rottenberg said. “He was not a religious man but was interested in Jewish culture and the community. His kids did not get a Jewish education. They did not celebrate Hanukkah. He sent his kids to WASP prep schools. Baldwin Germantown Friends. In those days if you were Jewish it was very tough to get into those schools.

In politics, his ability to work across ethnic and religious divides was perhaps his greatest skill.

In 1917, he would earn a seat on the city's General Council, a sprawling legislative body that would later be replaced by City Council. He would also befriend Philadelphia's Archbishop Dennis Dougherty, who built the city's Catholic school system. And, he would become a political ally to the emerging Democratic reformer Richardson Dilworth and take a position as the chair of Philadelphia's City Planning Commission, overseeing the urban renewal project that built Society Hill.

No matter what confronted Greenfield, he was relentlessly inventive and optimistic. Today, though, there is little left of his vast business empire, but there still is the Albert M. Greenfield Foundation, of which his granddaughter Priscilla Luce is president.

Today, while his name does not command the instant recognition of Dilworth, Rizzo or Green, “The Outsider” shows how Greenfield had more to do with opening opportunities for immigrants in Philadelphia than any single person. Ultimately, one understands that without Greenfield, there likely would not have been a place for later pioneers, immigrant or otherwise.

“You could do a terrific real estate tour of Greenfield's work,” Rottenberg said. “He remade the face of Philadelphia in the 1920s. I am sitting in the building right now at Walnut and Juniper that is now called the Philadelphia Building. He built it in 1923 and had an office here right up until the day he died.

“It's not the buildings themselves, though, that are his legacy. He redefined what it means to be a citizen. You can push the borders and be just about whatever you want to be. Instead of letting other people define you. As he might say, 'Why don't you get out and do something like I did.'”

Dan Rottenberg will appear at Chestnut Hill College's Sugarloaf Center, 9230 Germantown Ave., at 7:30 p.m. on Thursday, Oct. 9. The lecture is free and open to the public. RSVPs are encouraged and should be sent to Drew Westveer at Westveer@chc.edu by Friday, Oct. 3.