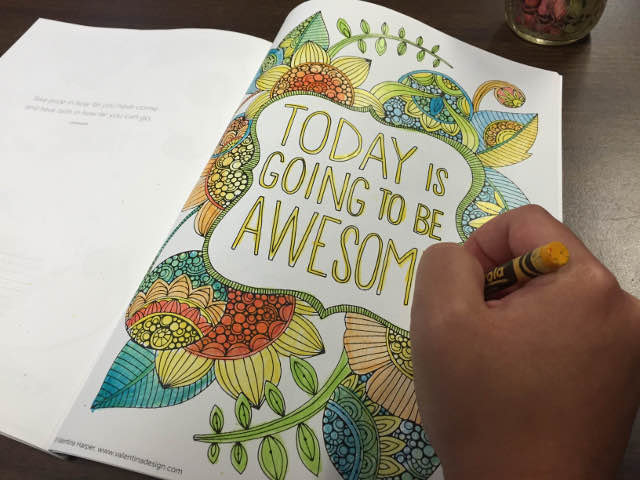 Some enjoy the craft’s therapeutic benefits. Others see sitting down with a box of crayons and a coloring book as an alternative to screen time, said Sheila Avelin, owner of Big Blue Marble Bookstore.

According to an interview between Basford and National Public Radio (NPR), Basford’s publisher asked her to illustrate a book for children. Instead, she said, “I'd actually like to do one for adults.”

Since then, Basford has sold over two million copies of the book worldwide, including 21 books sold at Big Blue Marble Bookstore alone, even though the books were totally unavailable last Christmas because of the high demand.

Coloring enthusiasts can post their completed coloring pages on johannabasford.com to share them with the world; other color-ers share their passion over Facebook and Pinterest spreading the word like wildfire. Community coloring events have also been popping up all over the country – from coloring events at the Free Library of East Baton Rouge Parish in Louisiana to Carolyn Stich Studio’s coloring club in Holland, Mich.

“I think there's something quite charming and nostalgic about coloring in,” Basford told NPR. “It's just something that you can do quietly for a couple of hours that, you know, is hand-held and analog and quiet – it’s simply a nice way to be creative.

“It’s low intimidation,” Avelin said. “You don’t have to learn a new skill – there’s not a lot of downsides. The downsides are that you spent $8, but you would have spent that on a latte. Well, OK, two lattes.”

In a children’s coloring book you may find enchanted castles and unicorns, and you may very well still find these same subjects in adult coloring books. However, the illustrations – or designs rather – are more intricate and sophisticated, making everyone who “colors-in” feel like an artist.

“Coloring is a great way for non-artists to experience the absorption and creativity of drawing without having to make the artistic decisions, said Laura Eyring, Mount Airy resident, artist, and illustrator of one adult coloring book, soon to be two. “It’s all the fun without any of the angst of creating art.”

Eyring created her first coloring book as a birthday gift for her younger sister, who needed something to beat stress. Eyring suggested that she start doodling – however, her sister did not quite have the confidence in her drawing skills.

Instead, Eyring made a few pages of a coloring book for her sister, and she put them in a binder with plastic sleeves. Since then, Eyring started selling her coloring books on Facebook.

According to Sue Ann Rybak, mother and associate editor of the Chestnut Hill Local, “I think it’s really true that every child draws and at some point, they decide that they’re not good at drawing by society’s standards, and we kind of lose that connection.”

Rybak rekindled her connection 13 years ago. After having her first child, she experienced post-partum depression. She recalls being anxious about taking care of her baby while having epilepsy.

“It all just kind of layered on top of each other, and I really had the hardest time just sitting and relaxing,” she recalled.

One day, Tracey Guinip, Rybak’s younger sister suggested that she try coloring. With the children’s crayons and coloring books the two women took to the craft, and Rybak experienced its therapeutic benefits.

“It ended up calming my anxiety,” she said. “At the time I was really having a problem with being calm and even just having fun and feeling happy.”

According to an article by Adrienne Raphel in The New Yorker, coloring is part of a relatively new “Peter Pan market,” which stems from, but is not limited to publishing.

Publisher’s Weekly reported that adults bought 55 percent of young adult books in 2012, and 78 percent of the time, adults confirmed that they bought the books for themselves.

Step aside, kids, adult summer camps are also becoming prevalent. Raphel mentions “Camp No Counselors,” an all-inclusive three-day sleepaway camp with all your classic camp activities – like water skiing, ga-ga, and capture the flag to name few – plus, open bar.

So, how long will this coloring trend stick around?

“In the 90s, I would never have believed that people would still be teaching each other to knit in 2015,” Avelin said. “It seemed like it was a total passing fad. may be gone by Christmastime, or it may be a new counter-screen trend. It’s too early to tell.”