This whimsical piece depicting Bud Abbott and Lou Costello, a popular comedy team long before Camille was born, is her acrylic on inkjet print, 70” x 40”, on exhibit now at Woodmere.[/caption] … 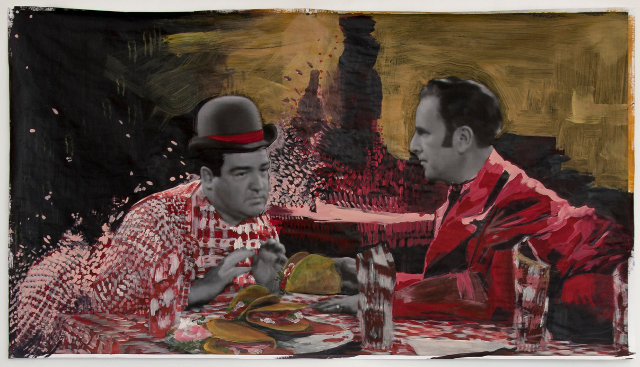 This whimsical piece depicting Bud Abbott and Lou Costello, a popular comedy team long before Camille was born, is her acrylic on inkjet print, 70” x 40”, on exhibit now at Woodmere.[/caption]

Camille Schefter, 26, was born in Denver and grew up in Mount Vernon, Iowa. Now living in Fishtown and studying at Temple University's Tyler School of Art, Camille is one of many talented young artists whose work is included in “In Front of Strangers, I Sing: The 72nd Annual Juried Exhibition,” which opened May 25 and runs through Sept. 1 at Woodmere Art Museum, 9201 Germantown Ave. Camille's work is so interesting and varied that we decided to profile her in the following Q and A format:

Q: What kind of work do your parents do? Any siblings? Are any of them artists?

A: My parents were trained as an architect and landscape architect, but now my father is an asset manager for a Dutch insurance company, and my mother keeps bees; she’s very artistic. I have two younger sisters, one who just got into med school and the other who is graduating this spring with a degree in biology. We’re all very different, and I’m very proud of them.

Q: How did you wind up in Philadelphia?

A: I moved to Philly to go to grad school at Tyler School of Art on North Broad Street in Philadelphia. I’m just completing my MFA in painting this spring. I got my BA in Fine Art and Hispanic Studies from Macalester College in Saint Paul, MN.

Q: How many pieces do you have in the Woodmere juried show?

A: I have two pieces in the Woodmere show. One of Abbott and Costello and a painting of an El Camino on an afghan titled “Oh, Honey, Don’t Bother.” The Woodmere show is juried, so I simply applied, and I was accepted.

Q: Did your parents support you in that decision since we all know it is very difficult to make a living as an artist?

A: They’ve always been very supportive. For a bit they tried to see if I might do illustration or design, something creative but which is perceived as having more “application,” but they realize now that that’s just not what I’m focused on. And yes, it’s difficult to make a living, but I’d rather make my work in my own manner and have a job tending bar than get paid well for doing something all day that I didn’t believe was right for me.

Q: What artists were your strongest influences?

A: Music influences me a lot — Delta Blues, punk, traditional Mexican corridos, lots of things — and I work out of a lot of ideas from cinema and animation. I’ve been influenced by Margaret Kilgallen and the Mission School artists.

Q: Are you strictly a fine artist? Can you see yourself as a commercial artist?

A: I’m an artist. Commercial art is an entirely different ballgame.

A: Yes, much of my work is based on personal experience, but the wide range of issues that I cover inherently relates to broader themes outside of myself. I’m interested in the idea of an American identity, how race and gender play into preexisting notions and imagery within the American psyche.

Q: How in the world did you ever get interested in Abbott & Costello as subject matter? I bet most people your age have never even heard of them. They died long before you were born (1959 and 1974, respectively).

A: The Abbott and Costello painting is one from a large series of film still paintings, all from American “buddy” movies. My parents raised me (and I’m grateful for this now) without much access to TV or pop culture in general. I played a lot outside and made a lot of art and music, built forts, was left to my own imagination really. What we were allowed to watch was an idiosyncratic mix of old stuff like Abbott and Costello and the Marx Brothers, British comedy like Monty Python and all the PBS we could soak up. So I suppose Bud and Lou are something I see as just a part of my life, like someone my age might think of Beavis and Butthead.

Q: Do you consider yourself a strong colorist? What mediums do you feel most comfortable with?

A: Color is very important to me. I think it’s one of the things I’m strongest at, but that’s why I limit my palette, as a challenge to myself. I’ve been experimenting with lots of different materials lately: acrylic on inkjet prints, enamel, afghan blankets, found objects, organic materials like avocado skins.

Q: How is the Philadelphia art scene compared to the other cities you've been in?

A: The Philadelphia art scene is good. I lived in D.C. before I moved here; there are more artists working in Philly, and there’s a lot more space to explore and perhaps make use of. There are some great opportunities for artists here without having to worry about exorbitant bills, as in New York, though Philadelphia doesn’t have as much going on or as many places to show. It’s all relative, though.

Q: Of all the museums you have been in anywhere in the world, which ones had the strongest impact on you?

A: I saw a Sigmar Polke & Paul Klee show at the Paul Klee museum in Bern, Switzerland last summer. I’ve always been fond of both artists, Polke has lived in a distinct spot in my brain for awhile now, but seeing them together in such depth was really special. I have dreams about Paul Klee’s puppets.

Q: What do you like to do when you are not painting? Any hobbies?

A:I really love to bike around the city, hang out in the parks. I do yoga; expending physical energy is really important. If I don’t burn off enough of that kinetic impulse before I get in the studio, I can’t concentrate. I also love to cook. I listen to tons of music. I read too much news and not enough fiction. I keep plants. And I thrive on watching people and their dogs.

Q: What are your ultimate goals as an artist?

A: I hope to be able to support myself with my work. I would love to be recognized as being part of a dynamic scene, dialogue about art, and thus life. I’m just going to keep making art, though, no matter what.

Q: Do you think you will stay in Philadelphia?

A: I actually am about to move back down to D.C. for personal reasons. I’ve liked Philadelphia and would consider living here again. People here are very frank. Sometimes that can be annoying, but other times it’s really refreshing. I like the look of the city as well, order situated right next to wildness; it feels alive. It can be hard, too, in more dangerous parts of the city, or when rudeness overcomes people; city life can be taxing on anyone. I generally love city life for the energy and diversity. And Philly pride is cool; people really feel like they are Philadelphians. I’m not, though, not right now. I’m still in a wandering state, as it were.

Q: Have you spent much time in Chestnut Hill? What do you like and dislike about it?

A: Honestly, I haven’t spent much time in Chestnut Hill. It’s very pretty, I appreciate all of the trees, something I miss. I’m very happy and honored to be a part of this show at Woodmere, excited to see it all together.