'A Yappy Time' had by all at Petapalooza

Veterinarian Dana Yard, of Wissahickon Creek Veterinary Hospital, with her Boerbull Issisa or “Beans,” who was cooling off in a pool.[/caption] by Sue Ann Rybak "A Yappy Time” was had by all at …

'A Yappy Time' had by all at Petapalooza 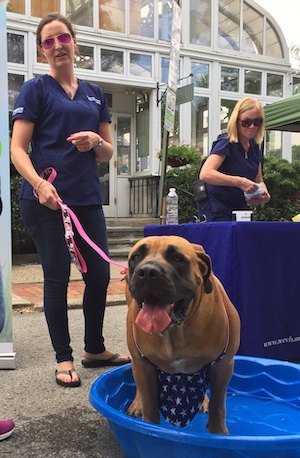 Veterinarian Dana Yard, of Wissahickon Creek Veterinary Hospital, with her Boerbull Issisa or “Beans,” who was cooling off in a pool.[/caption]

"A Yappy Time” was had by all at Chestnut Hill Business District's Sixth Annual Petapalooza, coinciding with its First Friday on June 7 at Germantown and East Highland Avenues.

It was a perfect evening to treat your four-legged friend – and yourself – to a special treat. Chestnut Grill & Sidewalk Cafe offered Blackberry “Bark”aritas for humans and a Chopped Chicken Bowl for doggies. And for those other pack animals, Chestnut Hill Brewing Company offered a treat for humans, as well, “Woof If You Like It” wheat beer for $5 and a “pup-peroni” pizza for $10. Everyone's favorite canine treat though was a free doggie sundae from Bredenbeck's Bakery and Ice Cream Parlor.

Phil Dawson, executive director of the Chestnut Hill Business District, was pleased with participation in Petapalooza and said the evening set a new standard for the neighborhood’s efforts for First Friday, a special evening in which participating businesses in Chestnut Hill will stay open later.

“It was without a doubt our most successful First Friday that we have ever had,” he said. “It was a great chance for people to be out with their families to explore the Chestnut Hill Business District.”

Even if you didn't have a pet, you were sure to find a new best friend at one of the many animal rescuers on site such as Philly Bully Team, Noah's Ark, To the Rescue, New Leash on Life, Finding Shelter, Brenda's Cat Rescue, ACCT, Tiny Paws Rescue and German Shepherd Rescue. After a Scooby snack, attendees had the opportunity to take a stroll down the avenue to get their paws read and photo taken at the photo booth. All species were welcome – Buzzbee, from B101.1 FM was even there. The Local thinks the Chestnut Hill Garden Festival lured him out of retirement, or maybe, it was the music. Besides B101.1 FM, there was live music by Shawn Nolan and Friends and strolling musicians Mandy Schaller (guitar) and Frank Ewing (accordion).

It looked like a scene from "Zootopia" on the 8600 block of Germantown Avenue – where friends from the Peaceable Kingdom Petting Zoo were hanging out. Besides bunnies, chickens and turtles, there were animals from South America – a coati mundi, marmoset and a baby yak.

Channel 3 was also on the scene. “Griffin,” the Chestnut Hill College mascot, had stopped at Chestnut Hill Cheese Shop, 8509 Germantown Ave., no doubt to buy hard-to-find gourmet foods. Apparently, there were no treats at Petapalooza that he liked.