The musical season at St. Paul's Episcopal Church, Chestnut Hill, is set to get underway this Sunday, Sept. 28, with a 5 p.m. Choral Evensong in celebration of the Feast of Angels. The first of the parish's Five Fridays of candlelit chamber music recitals is scheduled for 7:30 p.m., Oct. 4, featuring saxophonist Jonathan Wintringham and harpist Caroline Cole.

The series raises money for Interfaith Hospitality Network of Northwest Philadelphia and Face to Face Germantown. All concerts are held in the church's sanctuary and are followed by a wine-and-cheese reception. Two weeks later, at 7:30 p.m. on Oct. 18, organist Christopher Jennings will present a solo recital on the church's mighty Aeolian Skinner.

The pipe organ at St. Paul's Church is one of the musical treasures of Greater Philadelphia. At 114 ranks and 6,357 pipes divided over four manuals (keyboards) and pedals, its only regional rival is the great Wanamaker organ at the center city Macy's department store. It is now one of the largest pipe organs in the country and is used for more than 125 services at the church every year.

Needless to say, it is an instrument in constant need of maintenance, with special requirements all its own. Zach Hemenway, now in his fifth year as organist/choirmaster/music director at St. Paul's, explained, “It takes two people working full time an entire day just to tune the reeds.” Hemenway was referring to a specific rank of pipes that imitate the sound of an orchestra's woodwind choir.

To help defray the cost of maintaining such a magnificent organ, the Ann Stookey Fund for Music has been established to honor the memory of Ann Stookey, a recently deceased member of the parish. “Ann was an alto in our choir,” Hemenway recalled, “and was totally beloved by everyone who knew her. Her family set up a generous matching gift, inviting everyone in the Chestnut Hill community, not just members of the parish, to share in Ann's love of music.

The long-term effort to maintain the instrument began in earnest under the musical directorship of Hemenway's predecessor, Richard Alexander. “For more than four decades, Rick meticulously took care of this organ,” Hemenway emphasized. “And the Ann Stookey Fund is meant to continue in her honor. She was very enthusiastic about choral music. She divided her time between Los Angeles and Chestnut Hill, and she always said that one of the things she missed most of all whenever she was in L.A. was the organ here at St. Paul's. She recognized it as a treasure. She was the 'life of any party,' and all of us miss her because she was involved in so many activities, both in the parish and in the Chestnut Hill community. Everything Ann touched was beautiful.” 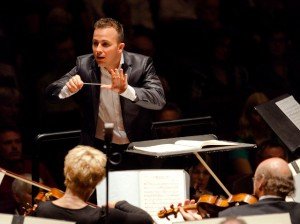 The Philadelphia Orchestra is set to open its 2013-14 season 7 p.m., Sept. 25, in the Kimmel Center's Verizon Hall. Yannick Nezet-Seguin, now in his second year as the ensemble's music director, will lead an all-Tchaikovsky program that includes “Marche slave,” the Violin Concerto with Anne-Sophie Mutter and “Romeo and Juliet” Fantasy-Overture. The regular subscription season opens Sept. 26-28 with the popular young maestro conducting Beethoven's “Calm Seas and Prosperous Voyage” and “Choral” Symphony No. 9 (with the Westminster Symphonic Choir) as well as the commissioned world premiere of Nico Muhly's “Bright Mass with Canons.”

Sitting just right of center behind the oboes will be West Mt. Airy resident Daniel Matsukawa, the orchestra's principal bassoonist since 2000. Born in Argentina to Japanese parents, his family moved to New York City when he was three years old; he began playing the bassoon when he was 13. Matsukawa was a scholarship student in the pre-college prep division of both the Juilliard School and Manhattan School of Music. He studied at Juilliard in the college division before attending Philadelphia's Curtis Institute of Music.

Speaking of Nezet-Seguin at the beginning of his second season as music director, Matsukawa said, “We really love him because he's the 'real thing.' Some conductors have a great stick (baton) technique but no heart, passion or soul. Then there are those who are wonderful musicians but don't have a clean technique when they conduct. Yannick has both, plus real charisma.”

That perfect chemistry between conductor and orchestra can be heard on the newly released CD on Deutsche Grammophon featuring Nezet-Seguin and the Philadelphians in Stravinsky's “The Rite of Spring,” which opens with arguably the most famous bassoon solo in the symphonic repertoire, and Matsukawa plays it hauntingly.