By Jon Landau This story is part of Quaker lore, but for the most part long-forgotten. Everyone knows something of the three wise men of Christmas fame, but there is a story of three wise men with … 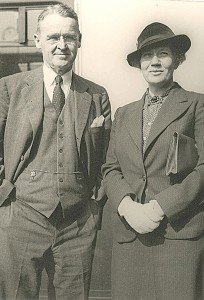 This story is part of Quaker lore, but for the most part long-forgotten. Everyone knows something of the three wise men of Christmas fame, but there is a story of three wise men with Chestnut Hill roots that also deserves attention.

The story began about the time of “Kristallnacht” in Germany (“The Night of Broken Glass,” Nov. 9 and 10, 1938), when many Jews were attacked, arrested and murdered, and thousand of synagogues and Jewish businesses were destroyed. It became clear to many that they would either get out of Germany quickly or they would not get out at all, and they intensified their efforts to find exit strategies.

The German Ambassador to the U.S. wanted to help and sought a group in this country to negotiate with the Germans that might have some credibility. He chose the Quakers because of the relief work the Quakers did following World War I and their peerless reputation as a result of those efforts.

The three Quakers who were selected to negotiate with the Gestapo were Rufus Jones, a great Quaker theologian and professor at Haverford College; George Walton, headmaster at the George School in Newtown, Bucks County; and Robert Yarnall, innovative business leader and founding member of the Chestnut Hill Friends Meeting on Mermaid Lane.

They decided to go quietly to Germany so that the Germans did not think they were going for propaganda reasons, but on their first day at sea the story came to the attention of a reporter at the Philadelphia Record who sought to interview them on their ship. They politely declined to answer questions, but the story dramatizing their visit appeared anyway and preceded them to Germany.

When Joseph Goebbels, the minister of propaganda in Nazi Germany from 1933 to 1945, read the story, he was furious, and he wrote a newspaper article himself mocking the three Quakers as “the three wise men” coming to save Germany.  When the Quakers arrived, no one would talk to them, and they thought about turning around, but decided to persist since they were already there. After several days the American Consulate General was able to secure an interview for them with Reinhard Heydrich, a  dreaded Gestapo leader who played a central role organizing Kristallnacht and was known in Germany as “The Hangman.”

When the three Quakers appeared for their interview, Heydrich would not see them but sent out two of his assistants. The Quakers explained that after World War I they had been responsible for feeding starving German children and that they had fed up to 1.2 million per day without asking anything in return and without politicizing their efforts in any way, and that they would help with Jewish emigration in the same way. The assistants left and conferred with Heydrich, while the Quakers sat in silent worship.

After 25 minutes the Germans returned and told the three Quakers that Heydrich had agreed to all of their requests. As a result, 960 Jews were able to emigrate from Germany during the next two years directly through the Quakers’ efforts, and countless more were referred to other agencies that were able to help. Many of the Quaker relief efforts were organized from the Chestnut Hill Meeting by Robert Yarnall’s wife, Elizabeth Biddle Yarnall, from Austria as well as from the Chestnut Hill Meeting. .

Rufus Jones includes a chapter about the trip of “the three wise men” in his autobiography, and there are materials about it in the Swarthmore Peace Collection and in Chestnut Hill Friends histories. The story came up now as part of an effort of the meetinghouse to research their history so that they can take it with them as they move to a new meetinghouse. Robert Yarnall lived from 1878 to 1967, and Elizabeth Biddle Yarnall from 1897 to 1975.

Jon Landau, 66, is a Quaker and an immigration attorney who lived in Chestnut Hill from 1986 to 2007. He lived just down the block from the Chestnut Hill East Train Station on Bethlehem Pike with his family. He still attends Chestnut Hill Friends Meeting.