With regard to the effort to save St. Michael’s Hall, Bill Valerio, the Patricia Van Burgh Allison Director of Woodmere, recorded a conversation with Sister Karen Dietrich, General Councillor for the Sisters of St. Joseph. 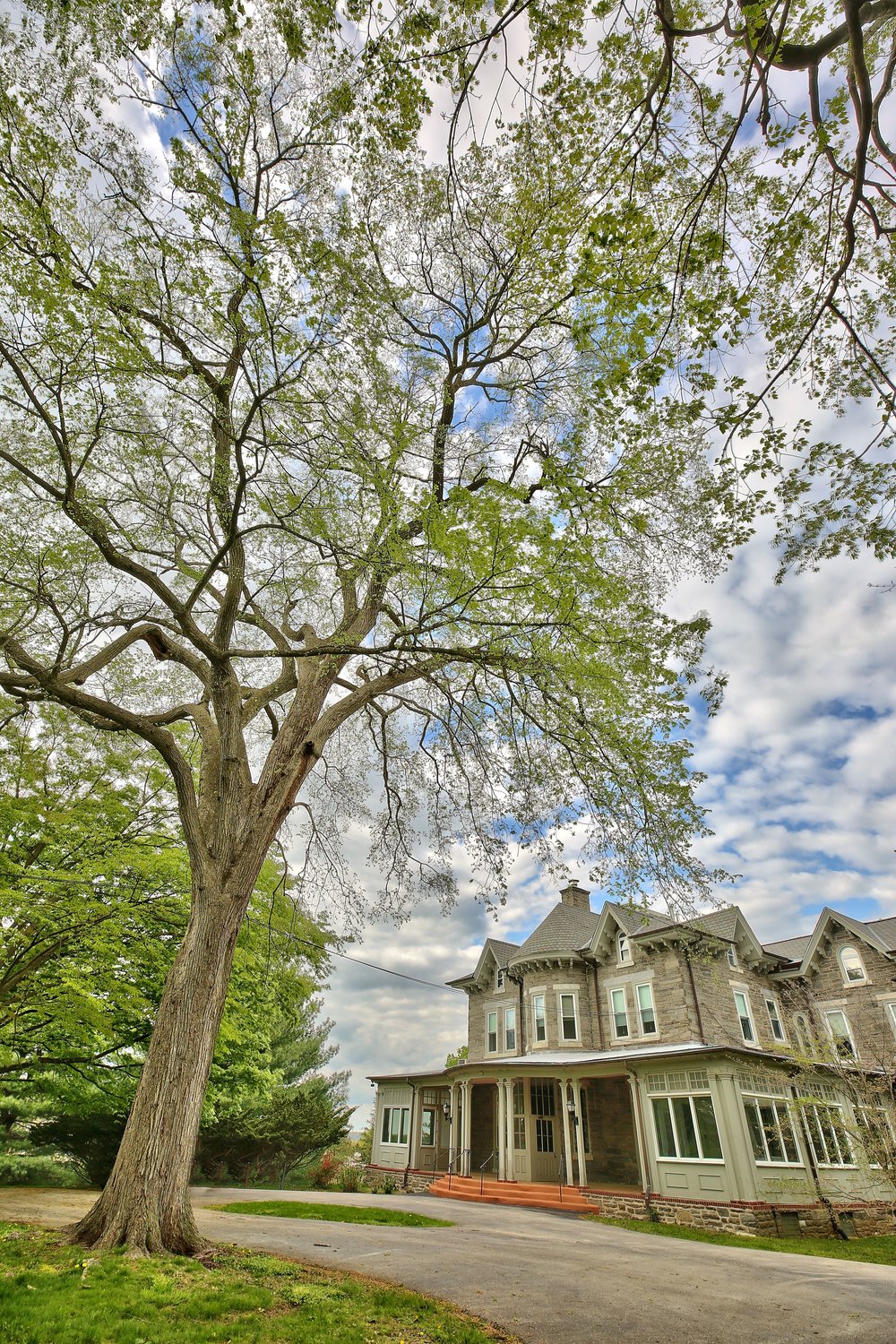 With regard to the effort to save St. Michael’s Hall, Bill Valerio, the Patricia Van Burgh Allison Director of Woodmere, recorded a conversation with Lori Salganicoff, the Executive Director of the Chestnut Hill Conservancy. As the Local reported in previous issues, the museum is presently working to secure funding to purchase the property at 9001 Germantown Ave. from the Sisters of St. Joseph, who have used the property as a residence. The Sisters have given Woodmere until June 15 to make an offer. – Ed.

Bill Valerio:  I'm very excited about the project to transform St. Michaels into Woodmere’s Multicultural Collection Study Center, using the walls of the great old mansion from floor to ceiling as a home for Woodmere’s collection.

I did not expect to be working on an opportunity of this magnitude this spring, but I'm very excited about the opportunity at St. Michael's.  Let me first thank you, and let our readers know that the Sisters have given Woodmere some additional time, until June, to raise the funds we need to not only purchase the estate but also renovate the building and carry it forward. We have a terrific matching grant, which, with generous gifts from the community, total $2.7 million as of this writing.

That the Sisters of Saint Joseph are treating Woodmere as a "preferred-buyer" means a great deal, and one of the important reasons to preserve the building is to sustain the fingerprints of the Sisters, so to speak. Saint Michael's is a landmark that carries many important histories. Your Congregation has a distinguished history of good work in Philadelphia, across the nation, and beyond.  Can you describe that history?

Sister Karen: I’m delighted to share a part of our family story, Bill.

The Congregation of the Sisters of Saint Joseph, Chestnut Hill, Philadelphia, began with six women who came together in 1650 in Le Puy, France. They went out each day, responding to the needs of people and were particularly attentive to women and children. Lace-makers, they taught that skill to women so they could sell their handiwork and earn a living. They were a combination of social worker, teacher, counselor, and problem solver. Religious women at that time were cloistered, but this new evolving Congregation was out to be among the people, side-by-side.

During the 18th century, the Congregation grew and spread throughout France until the violence of the French Revolution brought about dramatic and far-reaching changes. Convents were suppressed and the Congregation was eventually disbanded. Imagine some of the scenes from Les Mis! Five Sisters of Saint Joseph were even guillotined and many were imprisoned.  But by the early 1800s, Mother Saint John Fontbonne (recognize that name?) re-established the Sisters of Saint Joseph in Lyon, again guiding the re-founded congregation in responding to every opportunity to serve every neighbor without distinction. Before her death in 1843, she saw the congregation increase to more than 3,000 sisters. Imagine!

We came to America at the request of the first bishop of Saint Louis, Missouri. Once again, it was six sisters who left Lyon as missionaries to North America. They came up the Mississippi and on March 25, 1836 they established the first foundation of the Sisters of Saint Joseph in the United States in St. Louis. They taught deaf children, native American children and Black children.

The sisters were quickly immersed in the life of the local Church, again caring for young people and widows, establishing a hospital and teaching on various levels, especially in parish elementary schools serving immigrant families.

And then we came to Chestnut Hill. In 1858, Mother Saint John Fournier, following the advice of her friend and advisor, Bishop Neumann, purchased from Joseph Middleton a piece of farmland, including a house named Monticello. On August 16, Mother Saint John and two other sisters arrived to take possession of the property that was named Mount Saint Joseph Convent. Neighbors brought them dinner their first night. They ate around a small table that we still have! Just six weeks later the sisters opened Mount Saint Joseph Academy in the front parlors of their new home. Imagine opening a school in six weeks.

St. Michael’s Hall, about a half mile down Germantown Avenue, was the estate home of the Harrison family. It was built in 1853 and purchased by the Sisters of St. Joseph in 1924 and housed our Fontbonne Academy for Girls. In 1945, the school moved to the Sisters' Assumption Hall and the building became a freshman residence for Chestnut Hill College. In 1961, the college built a freshman dorm and the Sisters used it for a residence until this past September.

Simultaneously, the congregation was expanding up and down the east coast opening and ministering in parishes and schools throughout Philadelphia and eastern Pennsylvania, New Jersey, Delaware, Maryland, Virginia, Washington D.C. and North Carolina.

Bill Valerio:  Let talk about the activities of the Order today.

Sister Karen: Today, the Sisters of Saint Joseph of Philadelphia number about 650 women. We serve in 11 states including Georgia, Florida and California. The Congregation is involved in education at all levels from pre-school through university, including schools for those at risk academically, socially, and financially. We also offer a variety of social, pastoral and spiritual services in parishes, institutions and dioceses. We provide healthcare at Saint Joseph Villa and other facilities and affordable housing for the elderly through HUD Projects, Bethlehem Retirement Village in Flourtown,  Academy Village, St. Joseph’s Village and Cecilian Village in McSherrystown. Here in Chestnut Hill, we have our Norwood Fontbonne Academy and Chestnut Hill College in addition to our Motherhouse. Mount Saint Joseph Academy is just down the road in Flourtown.

Many of us work with the most vulnerable in society: among them, those who are immigrants, elderly and homeless. We are involved in lobbying efforts to effect systemic change particularly on issues involving racism, the death penalty, human trafficking and care for the Earth.

Bill Valerio: My understanding is that the Sisters of St. Joseph are dedicated to the preservation of the beauty of the earth.  Can you describe how that evolved as a mission and what it has meant?

Sister Karen: For us, the most important thing is to be in right relationship. It was 1994 when we first publicly and corporately declared our commitment to “treasure and care for Earth.” Hopefully we had been doing this for years, but now we deliberately and consciously called ourselves to this relationship with our earthly home. As Sisters of St. Joseph, we believe that our call is an active inclusive love that seeks a union with God and the sacred community of life and that includes all of creation – air, soil, water, plants, and animals.

We are learning every day, as are our neighbors, our country and the world. We join with all those who recognize that we are the stewards of this planet. How we care for it matters. Climate and natural resources are all dependent on humans. We have the responsibility to make choices for the common good because we are all interdependent. We know that Earth is sacred.

When we consider our St. Michael’s property, our land ethic calls us to keep in mind the needs of the folks in the neighborhood. It means that we collaborate with individuals and groups who are dedicated to these same principles. Our commitment to Earth means we will do our best to preserve, protect, restore, and cherish the integrity, diversity, balance, and beauty of the land and all forms of life with whom we share it. It is our responsibility as Sisters of St. Joseph to make decisions that tend and preserve the land that has been entrusted to our care. We know that beauty, in green spaces and in the arts touch and fill our souls in profound ways. We are grateful for the possibility of perpetuating that blessing.

Bill:  Thank you, Sister Karen, for sharing the amazing history of the congregation and for being a partner to Woodmere as we seek to acquire St. Michael’s and reinvent its future. It is unusual for a seller and buyer to be so much in partnership, but we feel a shared responsibility to the land, the open space, and to the history that Saint Michael’s represents. The large estate trees on the property have been around for a long time, and Woodmere commits to caring for them into the future.