Mt. Airy artist/author Kay Wood sketches by hand and adds color on the computer. Here she is adding color to sketches of planet Earth for “The Big Belch.” (Photo by Alicia M. Colombo)[/caption] … 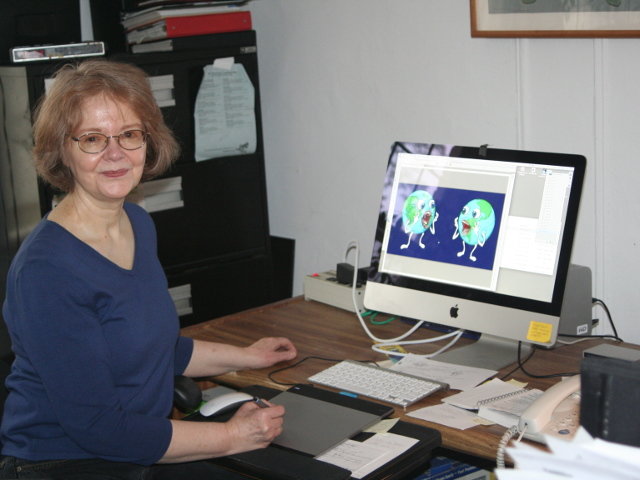 Mt. Airy artist/author Kay Wood sketches by hand and adds color on the computer. Here she is adding color to sketches of planet Earth for “The Big Belch.” (Photo by Alicia M. Colombo)[/caption]

Mt. Airy author, graphic artist and radio show host, Kay Wood, has had, in her words, “a brutal year… It was just so horrible in so many ways.” Wood's husband and companion of 35 years, Michael Silverstein, a business writer and former senior editor at Bloomberg's Market magazine, died on Sept. 27 of lung cancer at the age of 75. “But even during Mike's grueling battle with cancer, he always encouraged me to keep up with the (radio) show…

“We're so great together,” Wood told us in an interview last year. “We encourage each other. I realized I could make a story out of the struggle for corporate greed over human sanity (in her first graphic novel, ‘The Big Belch,’ a satirical adventure of environmental crime fighters that was awarded a Leeway Foundation Arts and Change grant in 2014 and is available on Amazon.com). Laughing at the world and what people do seems the only way to stay sane ...

“(And) Mike advised on the radio show all the way till he could no longer do it, and it gave him a good thing to focus on – a distraction we both needed.” (Kay’s radio show, “Planet Philadelphia,” which is one year old, streams 4 to 5 p.m. on gtownradio.com the 1st and 3rd Fridays of every month. Podcasts of the live shows generally become available the day after they broadcast at planetphila.com or gtownradio.com. Wood recently was awarded another Leeway Foundation grant for $2,500 for “Planet Philadelphia.”)

In addition to being a business writer, Silverstein was a poet, editor, humorist, social commentator and humanitarian. A native of Brooklyn, N.Y., he might have stayed there had he not been inducted into the Army. He served honorably as a Military Policeman in West Germany, for which he remained proud the rest of his life.

Upon discharge, he went on to live in a lighthouse in Spain, in London, New York again and Boston before finding his home in Mt. Airy. His varied career included serving as a senior editor for Bloomberg News and writing a dozen books, serious and comic, fiction and non-fiction, in poetry and prose, on subjects ranging from politics to the financial derivatives market, the environment, solar energy, etc.

Hundreds of his articles and op-ed pieces appeared in publications such as the New York Times, Wall Street Journal, Atlanta Constitution and Christian Science Monitor. He was a columnist for the Los Angeles Times and Boston Phoenix and was a regular commentator on National Public Radio.

According to Kay, “He was almost certainly the only person to ever covet the title ‘America's Best-Loved Financial Poet,’ but he was always more interested in promoting good ideas than in personal advancement. So he would move on to something new whenever he saw that others were catching on, never sticking around long enough to take credit or cash in.” (Silverstein’s final book was his entertaining personal memoir, “Gorilla Warfare Against the Bureaucratic State; Confessions of a Lefty Libertarian.“)

Wood, 64, who has lived in Mt. Airy for more than 20 years, was always a talented graphic artist but had never worked in radio until “Planet Philadelphia.” Her twice-a-month show is a mix of environmental news, interviews, music, poetry, etc. What prompted her to want to host a radio show in her mature years?

“Over the last several years,” she explained, “I’ve met many people who are incredibly dedicated in their efforts to help clean up our world, both physically and socially. They are my inspiration in creating, producing and hosting the radio show that I will be doing for the foreseeable future. I do everything to make it as engaging as possible.” 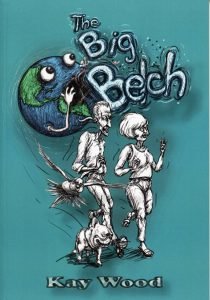 In a typical program last Friday, Wood interviewed Christine Dolle, a field organizer for “Moms Clean Air Force,” about how our children are not now getting the clean air or water the PA Constitution is supposed to guarantee — and the power of parents to change this sad state of affairs.

Wood, a native of North Jersey, originally studied illustration at Philadelphia College of the Arts (now University of the Arts) and made a living painting and drawing, mostly medical or scientific illustrations, for more than 40 years. After three-and-a-half years of hard work and a successful Kickstarter funding campaign, Wood published “The Big Belch” in July, 2014.

The title refers to “a hastily concocted and volatile new oil spill cleanup method” that releases possibly harmful methane gases when oil-eating bacteria are unleashed into the waterways. How has the book done? “Pretty well,” Wood said, “considering I had no experience whatsoever doing a graphic novel and starting on my first in my 60s. I got some pretty fine reviews.”

According to Signe Wilkinson, Pulitzer Prize-winning political cartoonist for the Philadelphia Inquirer and a Chestnut Hill resident, "Kay Wood's graphic novella pits a gang of haplessly humorous activists against an environmental Armageddon in the making. In the ‘Big Belch,’ the stakes are high, but so are the spirits of characters bumbling their way to a better world." (See other reviews on kaywoodart.wixsite.com/thebigbelch)

Wood said the best advice she ever received was “probably something I should be doing right now — not to hold on to anger, and as my Uncle Harold told me in my 20s, ‘In this life you just have to shake the blood out of your eyes and keep on going.’”

Planet Philadelphia’s listener comment line is 484-278-1846. One can record a message anytime.