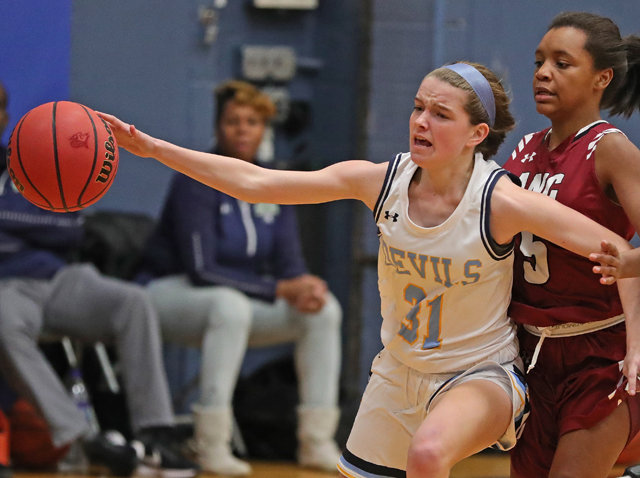 Julia Thomson (left), a Blue Devils freshman, tries to keep control of the ball while under pressure from ANC. (Photo by Tom Utescher)

A non-league girls' basketball contest last Friday at Springside Chestnut Hill Academy featured two teams with records under the .500 mark trying to capture their second victory of the season. The host Blue Devils scored the first five points of the afternoon and led the rest of the way, securing a 43-16 victory over the Lions of the Academy of the New Church.

SCH had begun the week at 0-4, but the Devils picked up their first win last Tuesday as they dispatched visiting Bishop McDevitt High School, 49-22. They improved to 2-4 with Friday's outcome, led by 12 points from sophomore center Layla Sawyer and nine from freshman shooting guard Ava Chavez.

These two athletes and senior guard Becca Arnold are the only current Blue Devils who were everyday varsity players last year. Several others mostly saw action on the JV squad, with occasional varsity appearances, and a number of other players are new to the program entirely.

"We have one senior, a couple of juniors and sophomores, and a lot of freshmen," remarked Flo Hagains, who is now in her third season as head coach at Springside Chestnut Hill. "A lot of the girls play other sports, and you can work with athletic kids that don't know basketball. You can put a ball in their hands, and teach them."

Still, the program has graduated a number of seasoned basketball players with years of experience.

"It's a big difference," Hagains said. "You can't just throw something new at them out on the floor and expect them to pick it up right away. You have to draw things up and go over them a couple of times."

In last Friday's game, SCH broke the ice with a lay-up by Sawyer assisted by sophomore Maya McDermott. Fouled on a made lay-up, Chavez converted her free throw to make it 5-0 before Navon Cooper hit a jumper to get the ANC Lions (1-4) on the board. After two more free throws for Chavez, Hagains sent in a new platoon of five players, allowing the visitors to get back within a point by the end of the first quarter, 7-6.

The Blue Devils would open up a 10-point lead over the course of the second period. Freshman Julia Thomson started the Devils off with a three-pointer from the left corner, then a rebound and outlet pass by Sawyer led to a fast break lay-up for McDermott.

Chavez added two buckets later on and would have all of her nine points for the day by halftime, when the tally was 18-8. 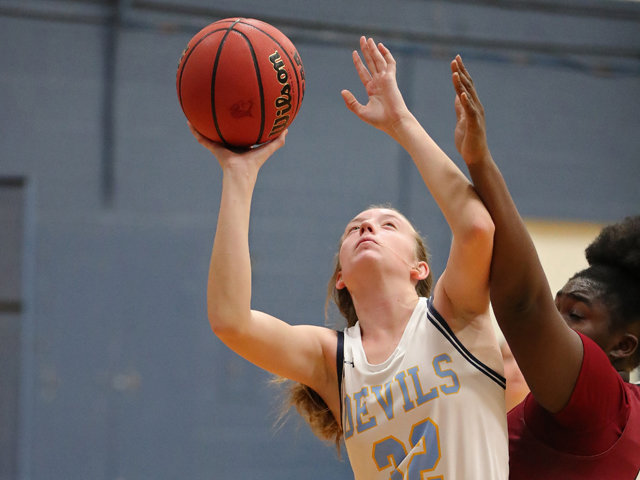 SCH sophomore Layla Sawyer rises up for two of her game-high 12 points. (Photo by Tom Utescher)

Sawyer scored eight of her 12 in the second half, and the SCH lead was never in danger, even when relatively inexperienced groups of players were on the floor.

For Coach Hagains, there is an upside to having such a young team.

"I'll have most of them for a couple more years," she noted. "My guards are very quick and athletic, and all these kids are willing to learn."