25 years later, Queen of Sushi is Chef of the Year

by LEN LEAR I can still remember the first time my wife and I ever ate Japanese food. It was 27 years ago at a restaurant called Asakura Plaza in a converted fieldstone house on Lansdowne Avenue in …

25 years later, Queen of Sushi is Chef of the Year

I can still remember the first time my wife and I ever ate Japanese food. It was 27 years ago at a restaurant called Asakura Plaza in a converted fieldstone house on Lansdowne Avenue in Upper Darby. Like most neophyte Americans, we were wary about eating raw fish (sushi), thinking we would surely get sick. But I had heard so much from friends about the glories of sushi that we just had to dip out toes into the waters.

[caption id="attachment_9381" align="alignleft" width="300" caption="Madame Saito, often referred to as the “Queen of Sushi,” has for more than 20 years in Philadelphia taught sushi classes and given sushi demonstrations at local schools. Named “Philadelphia’s Chef of the Year” last year by the American Culinary Federation, Madame Saito is seen here giving a sushi class at her restaurant, The Head House, at 122 Lombard St. (Photo by Len Lear) "] 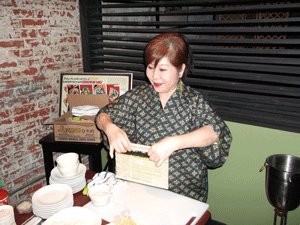 I recall thinking that the flavors were unlike anything we had ever tasted before, but were absolutely delightful. I still have my nearly illegible notes on a wrinkled yellow piece of paper about two dishes in particular that blew up away: “kappamaki” — fresh tuna and rice rolled in seaweed and sprinkled with sesame seeds with a dipping sauce of soy, wasabi (green horseradish) and freshly shaved ginger; and “avokama” — ripe, egg-shaped avocado striped with the pink edges of wafer-thin slices of pressed pollock.

Even more memorable was the co-owner/chef, Madame Saito, a diminutive pinata of energy with a perennial smile on her face. (I’m pretty sure her husband, Takao, did not speak a word of English, but he also brightened up the dining room with his toothpaste commercial smile.) Madame Saito, who had studied with some of Japan’s premier sushi chefs, not only did the cooking, but she also did some of the serving and explained to innocents like us how to eat the food properly.

“We came from Tokyo because of a dream that our three sons would be educated in the U.S., particularly at the University of Pennsylvania, because we heard it was a great university,” said Madame Saito at the time. “We were both worried because Takao spoke only Japanese, and I knew nothing about American customs. But I trusted my years of cooking. I thought people communicated more by heart than by language.”

What Madame Saito, now 61, and her husband lacked in facility with English, they more than made up for with hard work and ambition. In 1986 they took over a small gift shop at 124 Lombard St. and converted it to a contemporary sushi bar called Tokio, and two years later they purchased the next-door property, a French restaurant, Le Champignon, which had been there for 20 years but was fraying around the edges. Madame Saito even went to Paris and studied French cuisine at Le Cordon Bleu and the Ritz-Escoffier. (By the way, the Saitos’ hopes for their three sons worked out perfectly. Tony Saito, 40, is now a dentist in Boston; John Saito, 39, is an M.D. in California specializing in pulmonary diseases; and Kenji Saito, 31, is both a lawyer and an M.D., planning to become an eye specialist.)

As if running three restaurants were not enough, Madame Saito, often referred to as the “Queen of Sushi,” has for more than 20 years also taught sushi classes and given sushi demonstrations at Temple University, the University of Pennsylvania, the Philadelphia Museum of Art and at countless other public and private events. In 2009 Temple University gave her an Honorary Doctorate in Education, and last year the American Culinary Federation named her “Philadelphia’s Chef of the Year.”

Madame Saito, who still gives sushi classes in her restaurant every Wednesday and Sunday, estimates that she has taught more than 3,200 area residents how to make sushi. “Teaching makes me feel young and gives me energy,” she said. “It makes me happy when the students clap. I even gave a class to Mayor Nutter. He was a good student. The roll that he made is now called ‘Nutter’s Roll.’”

But Madame Saito is not one to rest on her laurels. In June of this year she opened The Head House at 122 Lombard St., where her Japanese restaurant previously stood. What makes The Head House unique is that it is a gastropub with more than 100 bottled craft beers and another 20 on draft, but there are two menus, one that includes bar staples like chicken wings and burgers and another one that includes a huge variety of sushi and sushi rolls.

During our recent visit to The Head House, while the Phillies were losing to the Cardinals, four of us drowned our sorrows in some great craft beers such as the fruity Ithaca apricot wheat draft ($6.50) and Stevens Point pumpkin draft ($8) and the rich, sensuous Troegs Troegenator Dopplebock ($8). Foodwise, our favorites were the Margarita pizza with pesto ($9), sublime and spicy tom yum kung soup ($6), Philly roll with smoked salmon and cream cheese (an amazing eight pieces of sushi for just $5.50); soulful seaweed salad with a soy sauce vinaigrette dressing ($8), and rainbow roll with avocado and cucumber wrapped aesthetically with fresh seafood ($10). The sushi prices are way less than the competition in center city.

On Wednesday nights, The Head House has Open Mic Night for local entertainers, and every Monday is Karaoke Night. And you can park at Park America, less than one block away at 215 Lombard St., get your ticket stamped at The Head House, and it will cost you just $5. For reservations for dinner or for sushi classes, call 215-922-2515 or visit www.HeadHousePhilly.com or www.QueenofSushi.com, or email madamesaito@gmail.com