by Pamela Rogow Dance pioneer, Leah Stein, 47, lives in Mt. Airy and teaches dance at Bryn Mawr College and Swarthmore College, but if you’ve seen any of her performances, you may well argue that …

Dance pioneer, Leah Stein, 47, lives in Mt. Airy and teaches dance at Bryn Mawr College and Swarthmore College, but if you’ve seen any of her performances, you may well argue that she inhabits her works. She creates and performs in dance that has an intimate relationship to her collaborators and to each environment. And while most of her site-specific works have been based in our region, she has also choreographed and performed in Java, Indonesia; Canada, Poland, Romania, Japan and Scotland. 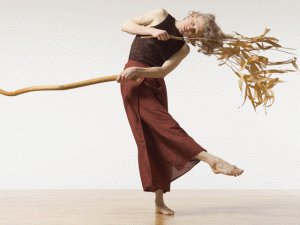 Next week, the Leah Stein Company’s 10th anniversary concert will showcase the company’s accomplishments of the past decade as well as introduce new directions where they are headed. Headed, as in cabbage head. More on that presently.

The program is being presented by the nonprofit Philadelphia Dance Projects, champion of regional contemporary dance as an evolving form. It will be shown at the Performance Garage, a 120-seat space in Spring Garden that was transformed by Jeanne Ruddy into a unique space for performance, rehearsals and dance. The anniversary shows are March 8-11.

“This is an artist who is important to know,” said Philadelphia Dance Projects executive director Terry Fox. “Leah has paved the way for site-specific work and has forged new territory in the way she creates structures in her dances. This program shows the history of an artist with a particular style and virtuosity that we felt was important to examine, and allows audiences to see the common threads throughout her works. It’s about getting close to the mover — watching logic and inspiration happen and getting inside the heart of it.”

In a conversation with Leah last week, she talked about her decision to create this show with the seven dancers in the company. “You work, you collaborate, you keep expanding.  But this is a landmark, not a small thing … Because of site-work, which is a real focus, I have an interesting relationship with the geography of this whole area.  I appreciate all the pieces.  The meadow in Fairmount Park…an abandoned lot on Broad Street… Christ Church burial ground…Bartram Gardens.  The work has woven this together, not the least which is the place — this architecture, geography and history.”

Leah’s dance focus on the environment began when she was a student at Wesleyan University in Middletown, Connecticut. “One of the first pieces I did as an undergraduate began when I was walking down a sidewalk in Connecticut.  Guys were pruning. There was a pile of beautiful pines; wonderful shapes, they held their form.  I made a piece with them, my first solo. I still have two or three of those vines, 30 years later.

“I’ve found such gorgeous sticks, like an animal, alive, inanimate, a weapon, a tool, a friend, a partner, a piece of architecture. I love the multiplicity of a place, of even how a gesture can mean something so different depending on who’s doing that gesture. Objects are an extension of the body but also another element.

“I’ve done many pieces with sticks and branches since.  I love place, objects. Before I did site work, I had this urge to give spaces a sense of place—even studios.  I started bringing objects inside, then.  One old piece was called ‘Fresh Eggs.’  And I did a work called ‘Cabbage Piece,’ with real cabbages.”

After our talk, I caught a glimpse of Leah rehearsing at the Moving Arts studio, with Toshi and seven cabbages.  And honestly, the humble cabbages seemed ethereal in this context. O glorious cabbages!  I began to recall Willa Cather’s paean to cabbage from a junior high English class — more than 30 years ago! — and realized, once again … oh Leah Stein’s dance company – they are magic.

Among other elements, the concert will include:

•“Battle Hymns”: Based on letters and songs of Civil War soldiers, Battle Hymns premiered in 2009 during Philadelphia’s Hidden City Festival and featured a score by David Lang, co-commissioned with the Mendelssohn Club of Philadelphia. This excerpt features six dancers and live singers, an elegant statement on freedom and peace in times of war.

•”Kite”: Sean Feldman, Asst. Director of Scottish Dance Theatre, accompanies Stein for this reprisal of a 2002 duet that explores the space between two people. Using improvisation and choreography, they present a simple, elegant dance that joins their classical and experimental backgrounds. Music by Stuart Dempster. (While in Philadelphia, Feldman will also hold technique classes weekdays, March 5–16, 10 a.m. to noon at Philadanco Studios.)

•”Hull”: Sculptor/boat builder Carolyn Hesse has created a 16-foot vessel for this work, inspired by a river’s edge and exploring what it feels like to be lost at sea. Performed by Michelle Tantoco, David Konyck and Jungwoong Kim. Music by Dave Champion.

The concert will take place Thursday, March 8; Saturday, March 10, both at 7:30 p.m.; and Sunday, March 11, 2 p.m. Tickets: $15 (DancePass), $20 (Thurs.or Sun.) or $25 (Friday or Saturday); $10 (children up to 12 years). At the Performance Garage, 1515 Brandywine St. Purchase tickets online at danceboxoffice.com. The public is invited to a dance party, $50 donation at the door, after the Saturday performance. For reservations and info, contact jane@leahsteindance.org or info@philadanceprojects.org