10 years of nature therapy and Resiliency in Flourtown

Ecotherapist Heather Hill (left) and Elizabeth Venart, Founder and Director of The Resiliency Center, are currently celebrating the 10th anniversary of their Center in Flourtown Commons. (Photo by …

10 years of nature therapy and Resiliency in Flourtown 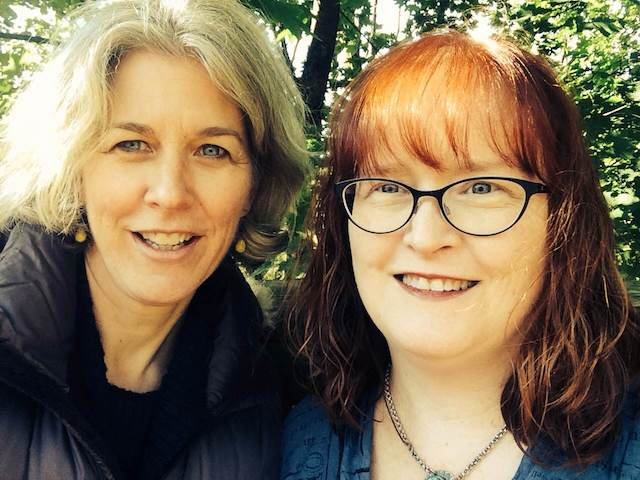 Ecotherapist Heather Hill (left) and Elizabeth Venart, Founder and Director of The Resiliency Center, are currently celebrating the 10th anniversary of their Center in Flourtown Commons. (Photo by Barbara Sherf)

In an effort to reduce my “Nature Deficit Disorder,” I write this article while on our sunny back deck after taking a Mindfulness Nature Walk with one of the newest of a dozen practitioners celebrating the 10th anniversary of The Resiliency Center in Flourtown Commons.

Ecotherapist Heather Hill received a Master’s of Social Service at Bryn Mawr College and then earned a certificate in Ecotherapy from The Earthbody Institute.

According to the Institute’s website: “Ecotherapy is more than just a psychotherapy session in a beautiful natural setting. It is a way of connecting to your own true nature and reclaiming your inner wisdom and resources. It helps restore your inner balance and empowers you to deal effectively with specific issues in your life.”

A social worker and psychotherapist by training, Hill puts on her hiking boots and offers the nature walks at 10 a.m. on Mondays free of charge. Participants should meet at The Resiliency Center before exploring Fort Washington State Park right behind their offices.

Hill has seen first-hand what studies have shown, that “forest bathing,” or the practice of spending time in a forested area in an effort to reap wellness rewards, is pretty darn good for you. That may explain why this Japanese trend is catching on stateside.

A 2010 study published in Environmental Health and Preventive Medicine found that participants who walked in a forest had lower blood pressure and levels of cortisol (a.k.a., the stress hormone) afterwards than those who strolled through a city environment.

So following my start to the week on Monday mornings from 8:30 to 9:30 with mindfulness meditation and Dean Solon, I took a walk with Hill just outside their offices on the mostly paved Green Ribbon Trail and more rugged Nature Trail. We mostly walked in silence, listening to the birds and water rushing past, watching leaves fall, touching the bark of trees and just being one with nature.

Hill was a program assistant with the Wissahickon Environmental Center (where she still occasionally volunteers) and then became an Environmental Educator at the Lower Merion Conservancy. She was also a school social worker at Crefeld School in Chestnut Hill and worked with Friends of the Wissahickon.

With a 23-month-old son and newborn twin boys, Hill left the school to take care of her children and pursue her educational goals. “The process of ecotherapy starts with an assessment of a client’s history and connection to nature. From there, client and therapist collaborate on goals for an outdoor session such as gaining a vision of hope or reducing anxiety,” said Hill, who lived in Mt. Airy for a decade before moving to Elkins Park with her husband and now teenage sons.

She cites research that shows 45 minutes to an hour in nature lowers depression, improves concentration and helps with ADHD and other issues. She noted that Philadelphia Rx is a pilot program in which physicians actually write prescriptions for patients to spend time in nature.

“For example, a tree can be a metaphor for being flexible yet strong; seeing a hawk take flight may allow a client to broaden their perspective or release their free spirit and soar,” said Hill. “Some are drawn to the stillness of the creek, some to the rapids. Nature becomes a canvas on which to project or discern what is most needed for healing …

“People become homesick and grieve in a place that has been forever altered. Look at the recent devastation in Florida, and locally I was just walking in the Wissahickon where there were downed trees and a lot of storm damage … People need to go through a grieving process and not give in to despair.”

Elizabeth Venart, Founder and Director of The Resiliency Center, noted that an ecotherapist is just one of many practitioners in a serene and welcoming space. “Dean Solon has been leading group meditation for 10 years now, with Karen Steinbrecher offering weekly QiGong classes nearly as long,” she said. “For more than eight years, Jen Perry has been hosting a monthly mindful knitting circle, and the women who gather together have made and donated over 250 blankets to the seniors at Dresher Hill Rehab and Nursing Home.”

Other healing services at the center include individual, couples and group counseling, as well as holistic and alternative approaches such as Nutrition Therapy, Somatic Therapy, EMDR (Eye Movement Desensitization and Reprocessing) Therapy, etc.

“I love seeing the actualization of a dream, a vision for healing, education and connection through community … I couldn’t be happier with where the center is today,” said Venart, “and that so many members of our local community have discovered the center as a safe place for healing … ”

Hill welcomes an RSVP in case walks are cancelled due to weather. Contact HeatherHillTherapy@gmail.com. More information at TheResiliencyCenter.com. Flourtown resident Barbara Sherf can be reached through CommunicationsPro.com or CaptureLifeStories@gmail.com.