CHC junior Kennedy Sutton strains to save a ball headed for the sideline. (Photo by Tom Utescher) by Tom Utescher Just after rolling over one of the weaker volleyball teams in the Central Atlantic … 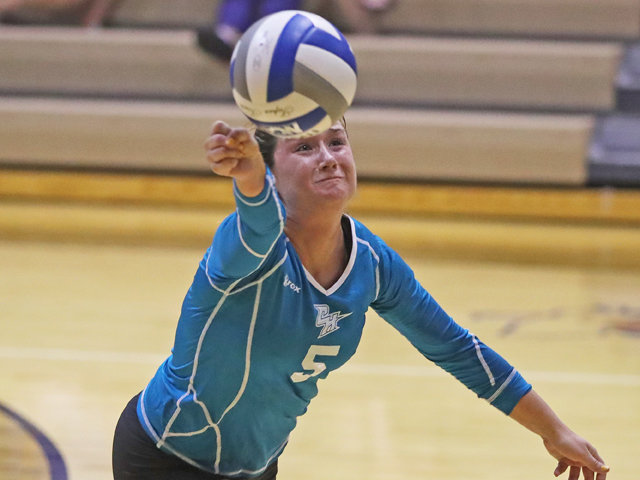 CHC junior Kennedy Sutton strains to save a ball headed for the sideline. (Photo by Tom Utescher)

Just after rolling over one of the weaker volleyball teams in the Central Atlantic Collegiate Conference, Chestnut Hill College hosted one of the strongest squads last Thursday evening.

The Griffins battled, particularly in the second set, but northern New Jersey's Caldwell University Cougars came away with a 3-0 victory and a 3-0 record in CACC competition. The same final score had favored Chestnut Hill earlier in the week as it cruised past the University of the Sciences, but 10th-year head coach Kim Kolesnik knew her Griffins would face an opponent of a higher caliber in Caldwell.

"They're the best team in the North and probably the second-best team in the conference," she pointed out. "They're a strong defensive team and they don't make a lot of mistakes. They have a 6'2" right-side who puts the ball away, and we knew going in she was going to be their leading scorer."

Kolesnik was speaking of Caldwell's Australian senior, Katrina Janssen, who indeed would register the match-high in kills, with 15. Chestnut Hill received nine from sophomore Reily Byxbee and five from senior Samantha Gelfan. Gabrielle Bennett recorded 21 assists for the Cougars, but Griffins junior Kennedy Sutton claimed a match-high 22 in this department. In digs, a total of 17 for CHC senior Peyton Reno was matched by the visitors' Jessica Mitchell. Gelfan and Reno are the only seniors on the Chestnut Hill roster (they're the team co-captains) and there are just two juniors, as well.

"We have four sophomores and five freshmen," noted Kolesnik. "Even the older players are having to adjust to new roles; they have greater expectations on them now than in years past."

Last Thursday, the Griffins took the court wearing unfamiliar teal jerseys; the CHC women were demonstrating support for the month-long "Get Real With Teal" campaign aimed at raising awareness and research funding for ovarian cancer.

Slipping behind early, the Griffins almost drew even as they got back to 9-10, but then the Cougars widened the gap once more. Chestnut Hill called time-outs with the score at 12-17 and then 13-20, but the visitors kept on course to a 25-16 win. 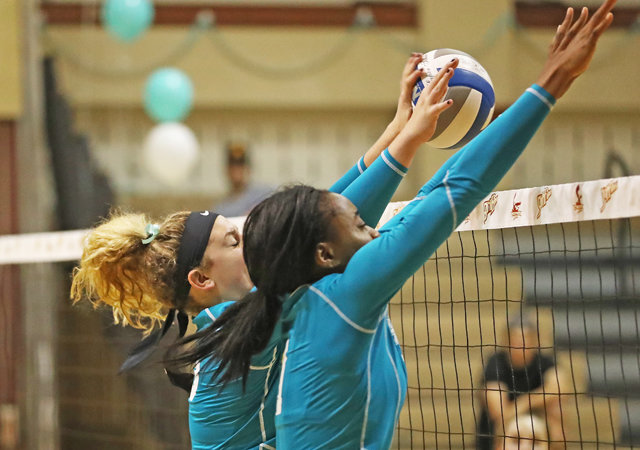 CHC blockers Ragen Baldwin (left) and Corrine Kalala team up to repulse a ball hit by the Caldwell Cougars. (Photo by Tom Utescher)

With a 2-2 count in the second set, one of the longest rallies of the night ended with a CHC kill shot to the left rear corner of the Cougars' court. Byxbee scored on a tip and a hit to put the Griffins up 5-2, but a three-point spurt by the visitors tied the set.

For the next few minutes, Chestnut Hill more than held its own, and a little more than halfway through the set a successful block had the hosts ahead 15-12. Four straight Caldwell points forced a CHC time-out, and when play resumed the imposing Janssen hammered one down for an 18-15 tally. The Griffins were unable to score back-to-back points after that, and the set slipped away from them, with Caldwell winning 25-19.

As in the first two sets, the Griffins kept pace with their guests early in round three. From a 5-5 tie, the Cougars edged ahead, and with the score at 10-8 they strung together three points to open up a five-point gap.

In their next two turns at the service line, the Griffins got three kills from Byxbee and tightened the score to 15-12, then five straight points got the Cougars to 20 points with an eight-point advantage. This proved too much for Chestnut Hill to overcome, and the visitors prevailed, 25-15.

With this encounter, the Griffins had gotten a good idea of what the play at the top of the league looks like. At this stage, Coach Kolesnik says that CACC South Division leader Jefferson University (formerly Philadelphia University) looks like the strongest team in the entire conference, with Holy Family University also a force to be reckoned with.

Reviewing her own young squad, she remarked, "Eventually we'll be a better blocking team; we're getting to that point. We need to put the ball away. We're seeing scoring out of the middle and on the right, but we're struggling right now on the left. We're a good defensive team, as we've been in the past. That's one of our strong suits - I think we're either first or second in the conference in digs per set."

A new addition to the Chestnut Hill coaching staff this season is Regina Trabosh, a Mount St. Joseph Academy grad who completed her playing career at CHC last fall.