Wyndmoor singer to star as soloist at July 4 concerts

Allison is seen here performing with the Philly Pops as part of its recent Memorial Salute concert on May 28 at the Mann Center for the Performing Arts. (Photo by Bachrach Photography) by Len Lear …

Wyndmoor singer to star as soloist at July 4 concerts 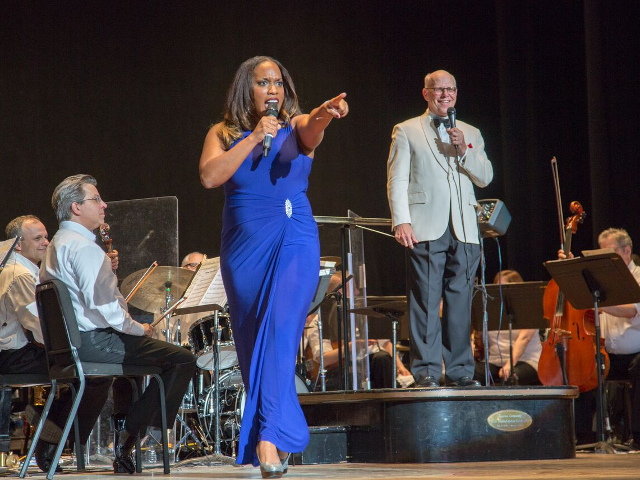 Allison is seen here performing with the Philly Pops as part of its recent Memorial Salute concert on May 28 at the Mann Center for the Performing Arts. (Photo by Bachrach Photography)

We do know for sure, however, that Allison grew up in Wyndmoor, attended Springfield Township High School and is an extraordinarily talented singer with a Masters in Music from The Boston Conservatory who has been chosen to perform solo at the two major events of the upcoming Wawa Welcome Philadelphia, a week of events from June 27 to July 4 celebrating the nation's birthday where it began. Allison will sing at Independence Hall on July 3, 8 p.m., and The Art Museum of Philadelphia on July 4, 8:30 p.m.

Here is an interview we conducted with Allison, who now lives in New York, last week:

Was either of your parents a musician?

Both of my parents are musicians. My dad was a concert pianist, and my mother is a conductor. They met at Temple University Boyer College of Music and Dance in graduate school. They are both professors of music there now.

When and how did you happen to get interested in music as a career?

I have been singing since I was a little girl. I was a founding member of Temple University Children’s Choir. I was also in my high school’s Thespian Group and show choir. In college, I was involved in the Spelman College Glee Club (Atlanta, Georgia) and various theater productions. So performing was always something in my life. I decided that I wanted it to be a permanent part in my life after graduating from college. I was toying with being an entertainment lawyer and was working as a congressional aide in D.C. for a Congresswoman from Cleveland, Ohio, Stephanie Tubbs Jones. Performing opportunities kept opening up to me, and I couldn’t do both. So I decided to trust my gut and pursue a career in music instead.

Do you still take voice lessons? If so, with whom?

I have a whole team of people who coach me for auditions or maintenance. I have an acting coach, Nancy Opel; vocal coach, Darren Cohen; pianist, Mary Rodgers, and for vocal lessons I go to Victoria Clark. They are amazing.

Who are your favorite composers?

What are your favorite pieces of music to sing?

I think it depends on my mood. “Love is Here to Stay” and “But Not For Me” by George Gershwin, “Anyone Can Whistle” by Stephen Sondheim and jazz song “Lush Life” by Billy Strayhorn are just a few songs I love to sing. I pride myself on being a diverse singer and lover of all music.

What singers, past and/or present, do you admire the most?

What was your favorite role?

Fantine in “Les Miserables.” It was the hardest but most fulfilling role on stage I have done. It is such a huge journey in a short amount of time. Plus, you have to sing one of the most famous songs in the musical theatre catalog, “I Dreamed a Dream.” It really challenged me in every area and made me a stronger actor and a more compassionate person.

What is the role you would most like to perform?

Ideally, I would love for someone to write a new role for me in a musical or play. Roles like “Carmen Jones” very much interest me as well. I like complex roles that have a lot of heart, grit and drive.

How many times did you perform in “The Lion King?”

How did the Welcome America job come about?

Maestro Michael Krajewski, the Principal Conductor of the Philly Pops, and I have been doing symphony concerts around the nation called “Tapestry: The Carole King Songbook,” starring Tony Award nominee and Grammy winner Liz Callaway. We had a great connection working together, and he asked me to join him in these concerts. This past May I joined The Philly Pops for their Memorial Day Concert at the Mann Center for Performing Arts. Maestro Krajewski and The Philly Pops have been great supporters of me. I am very grateful.

What is the best advice you ever received?

Which talent that you do not have would you most like to have? Why?

Piano. I wish I hadn’t stopped playing the piano. I am average, but I could have been so much better, especially since I had two parents who played brilliantly. It would have helped me so much more in this profession.

If you could live anywhere in the world, where would it be?

I love London. My dream is to work in the West End. I am obsessed with British history, especially anything about Henry VIII and Elizabeth I.

What do you like to do in your spare time?

If you could meet and spend time with anyone on earth, who would it be?

I have four people on my wall for inspiration — Maria Callas, Judy Garland, Leontyne Price and Barbra Streisand. Two have passed away, so I would say Leontyne Price. I was able to meet Ms. Streisand backstage after my performance in Gershwin’s “Porgy and Bess.” I couldn’t breathe. She is a goddess.