Megan Rutt with her children, twins Carly and Madeline, and her son, Owen. (Photo courtesy of Megan Rutt) by April Lisante It was the size of a pea, but Megan Rutt knew something was wrong. She was … 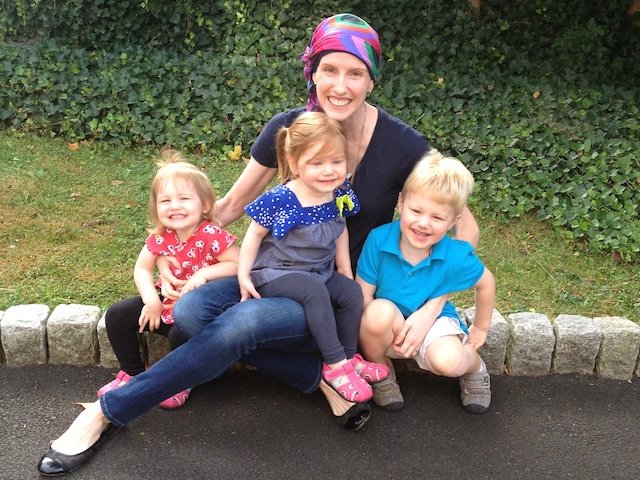 Megan Rutt with her children, twins Carly and Madeline, and her son, Owen. (Photo courtesy of Megan Rutt)

It was the size of a pea, but Megan Rutt knew something was wrong.

She was sitting on her sofa one night in June 2013 when she went to adjust her bra and knew the lump she felt hadn’t always been there.

At age 37, the Wyndmoor woman was the epitome of health. An accomplished marathon runner and Iron Man competitor, she was the new mother of twin girls, Carly and Madeline, with her boy, Owen, only 2 years old.

At that time, she knew she was tired. She had so many draws on her energy – getting the babies to sleep and waking up all night to care for them. But this was something else.

So she called her doctor.

“He said ‘I’m sure it’s nothing,’” Rutt recalled. “I was totally relaxed, because I am not an alarmist. But I knew my body enough to know this was not normal.”

And it wasn’t. After undergoing a mammogram that still left things questionable, Rutt agreed to an elective biopsy. Even after the biopsy and as she awaited results, doctors told her husband there was only a “one in a thousand chance” this was anything significant.

The following week, the news arrived. Rutt called on a Friday afternoon to check on her results, because she hadn’t yet received a call.

“You know when the doctor gets on the phone that something is up,” Rutt said.

By July, Rutt underwent a double mastectomy surgery, where doctors found the cancer had spread to her lymph nodes. They removed everything and started her on rounds of chemotherapy, which lasted several months. Simultaneously, she began additional treatment that would go on for a year.

“I was overwhelmed, because I hadn’t slept for a year with the twins,” she said. “I was already in that overwhelmed state and my body just went into overdrive.”

As she lost her hair and tried to keep up her strength, she discovered, as many women do, that the gene had been passed from another family member. In this case, the carrier was her father’s mother. She now faced the reality that her sisters, her mother and even her children could be at risk. 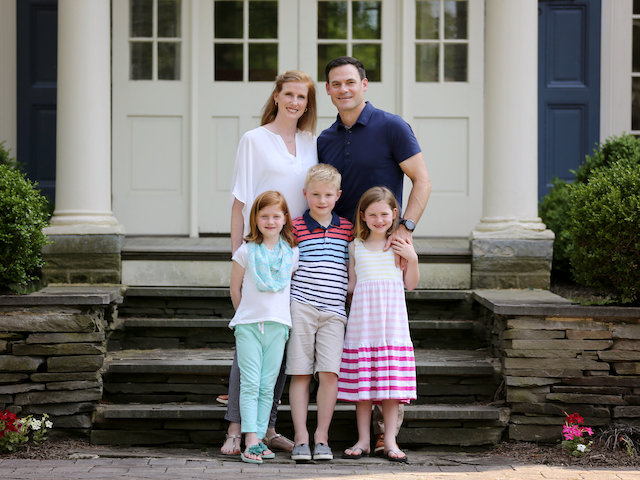 Megan Rutt and her husband, Matt, with their children: twins Carly and Madeline and son, Owen. (Photo courtesy of Megan Rutt)

“That, to me, was much more difficult to take,” Rutt said. “I felt like I could handle anything, but this was messing with my people!”

She quickly learned that every cancer is different, and each woman and how they are treated is different. So Rutt got involved with the Living Beyond Breast Cancer organization, which helps more than half a million women across the country become informed about the disease through online Webinars, access to medical reviews, doctors around the country and even a helpline.

Ask Rutt if she is in remission or cured, and her response is matter-of-fact.

Even after treatment, patients are not necessarily called survivors. They are N.E.D., or No Evidence of Disease. Many suffer lingering aftereffects from breast cancer, from depression to sapped energy. She needed hormone therapy, and in her specific case, a full hysterectomy to eliminate other cancer risks.

“I am fundamentally and physically a different person now,” she said. “I can still run now, but not as far or as fast.”

To help other women, Rutt now volunteers for LBBC and sits on the board of directors. Last November, she was honored with the LBBC’s Donna Noce Colaco Going Beyond Award. She also now partners with global pharmaceutical companies to help communicate the needs of patients and their concerns.

She knows she is one of the lucky ones. Her cousin, who was diagnosed at the same time she was in 2013, died at the age of 32 while Rutt was going through her treatment. The fear never subsides. Sometimes she will get a pain and wonder: Is it back?

“I feel like one of the lucky ones,” Rutt said. “I feel lucky that we live in Philadelphia where we have such great access to health care. Some women live in rural areas and do not.”

And though she had a wonderful support system with her family and her doctors, she wants women to know that they need to reach out to talk to other women their age.

“I would encourage women to reach out to other women who are in a similar age and stage of life.”