Long-time Chestnut Hill resident Dr. George L. Spaeth is arguably the most renowned ophthalmologist in the world. The Director Emeritus of the Glaucoma Service at Wills Eye Hospital received his … 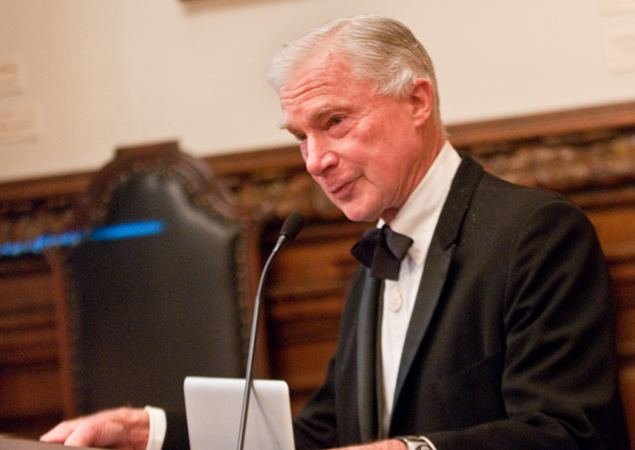 Chestnut Hill resident George L. Spaeth, MD, arguably the most renowned and influential ophthalmologist in the world, has just written his 23rd book, “Glaucoma, What You Need to Know to Preserve Your Sight and Enhance Your Health.”
Posted Thursday, January 6, 2022 12:00 am
by Len Lear

He has held the Lewis J. Esposito Glaucoma Research Professorship since 2000 and is a Professor of Ophthalmology at Sidney Kimmel Medical College at Thomas Jefferson University. He is the author of hundreds of papers in the peer-reviewed literature, has written scores of book chapters and an astonishing 23 books. His latest book, just published, is “Glaucoma, What You Need to Know to Preserve Your Sight and Enhance Your Health.”

Even more remarkable is the fact that the 89-year-old physician still goes to work at Wills Eye Hospital. A founding member and first president of the American Glaucoma Society, he was also a founder of the Glaucoma Service Foundation to Prevent Blindness and served as chair of the Ethics Committee of the American Academy of Ophthalmology.

As a resident at Wills Eye Hospital, Spaeth discovered the disease homocystinuria, an inherited disorder in which the body is unable to process certain building blocks of proteins properly. He published much of the early work on the condition, including the use of a successful treatment. His textbooks are used in medical schools all over the world, and he has been given more awards than can be listed here, including the Albert Schweitzer Leadership Award - which he has in common with Ronald Reagan, Madeleine Albright, Hillary Clinton and Mikhail Gorbachev, among others.

Spaeth is also very proud of his late father, Dr. Edmund B. Spaeth (1890-1976), professor of ophthalmology at the University of Pennsylvania from 1934 to 1955, founder of the American Board of Plastic Surgery in 1939 and author of the four editions of the world's standard text for eye surgery.

While Spaeth's latest book (co-written with Dr. Parul Ichhpujani) is titled “Glaucoma,” it was written primarily for ordinary readers, not medical professionals. And according to Spaeth, it is more about about enhancing one's overall health in a comprehensive sense: financial, sexual, spiritual, intellectual, emotional and social than it is about vision.

“The basic thesis,” he said recently in an in-person interview, “is that there are effective processes of good self-care and that they are very much the same for all the areas mentioned: accurate observation, learning what is needed to know, not denying, being honest, being accountable and frequently saying, 'I don't know, so let's find out!'

“I chose 'Glaucoma' (for the title) because I can speak with authority, although I dislike that word, about glaucoma. The sad fact is that people will not be healthy until they take good care of themselves, which requires also caring for others. No one can make any other person well. Nor will the costs of care be affordable until people become able to care for themselves well.

“Medical doctors not only do not encourage good self-care, but often consider it a threat. The first paragraph of the Hippocratic Oath requires physicians to take care of each other and to share their knowledge 'freely with their brethren … and with none other.' It is a sad irony that people will not learn how to care for themselves from doctors, even though 'doctor' arises from the word for teacher in Latin.

"So I think the book is an 'authoritative' text on what one needs to observe, learn and be honest about with regards to glaucoma, but that is just the vehicle taking, I hope, the reader to becoming well broadly in the real world. The book's mission is to increase insight.”

According to Spaeth, one of the most important sections of his book is the one regarding misconceptions about glaucoma and other health and disease issues. For example, it is a misconception that “lifestyle does not affect the impact of damage from glaucoma.” The truth, he declared, is that “the two most important things determining whether a person loses function from glaucoma are the biological nature of the person and how well she takes care of herself.”

Another misconception that Spaeth emphasized repeatedly in person and during phone interviews was that people with normal eye pressure cannot get glaucoma. “Absolutely not true!” he insisted. “Ninety-five percent of people with elevated pressure never get glaucoma, and one-third of those who do have glaucoma have pressure in the normal range. Up until about 1960, 95 percent of patients who were being treated for glaucoma did not even need the treatment because they were never going to lose their vision. On the other hand, one-third who could have been helped by treatment did not get it because their pressure was normal … And not every case of glaucoma needs surgery. About 98 percent of rapidly progressing cases do need surgery, but only about two percent of slowly progressing cases need surgery.”

For more information, visit kuglerpublications.com. Len Lear can be reached at lenlear@chestnuthilllocal.com