Tens of thousands of Women marched locally in Philadelphia on Saturday, Jan. 21. (Photo by Hannah Mazzaccaro) by Rev. Linda Noonan After the election I thought, black lives won’t matter and people … 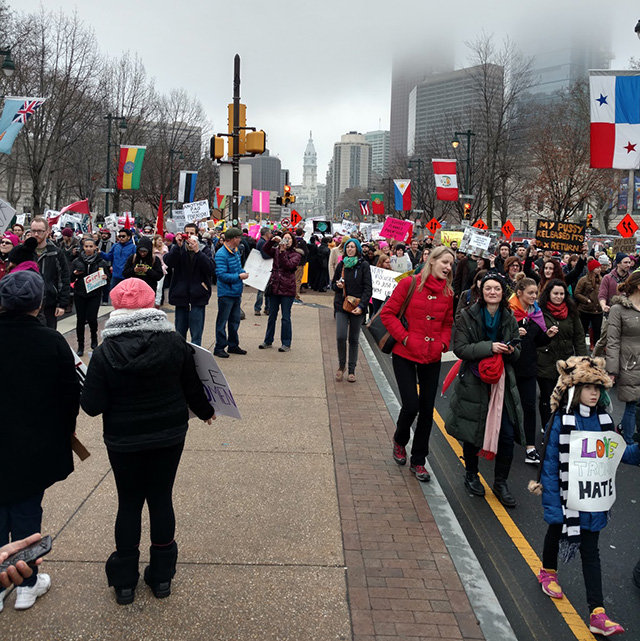 Tens of thousands of Women marched locally in Philadelphia on Saturday, Jan. 21. (Photo by Hannah Mazzaccaro)

After the election I thought, black lives won’t matter and people are going to die. But no matter what the outcome of the election had been, black lives still wouldn’t matter and people would still die. I marched in Washington not to protest against the President, but to renew my own commitment to participatory democracy, collective action, and personal responsibility.

I do not want to be lost in anger and anxiety. I will not let despair take a seat at my table. I want to be on fire in my own life and commit to owning my privilege and channeling it to solidarity, resources, and the commitment to be the change that I want to see in the world. Marching with others in Washington, filling the streets on Martin Luther King Day in Philadelphia, building community, and strengthening spiritual connection all help keep me ignited when, on my own, I would likely despair and withdraw.

I am a white, queer, temporarily able-bodied, cisgender pastor whose Christian tradition is not the only or best way to be religious, but one that equips and empowers me to stand with the most vulnerable among us. I live on land that is not mine on earth that belongs to our children. I marched because, while I drink clean water, people are fighting in it and protecting it at Standing Rock. I marched because, while I am white, my children are black. I marched for living wages and good health care and for my Muslim and trans and undocumented siblings. I marched for education and health and protection of civil and human rights.

Our country is a massive, complex fabric that is fraying not just at the edges, but the very center. We can’t fix it all. But neither are we free to do nothing. So pick a thread. Just one. Follow it. Learn about it. Hold on to it. Fight for it. I march because I believe we reweave the tapestry of country and community. We can be that place where together we all rise.