Friedman painted this most appealing watery scene from Annecy, a beautiful region of southeastern France. by Len Lear Regular readers of the Local will most likely recognize the name Stacia … 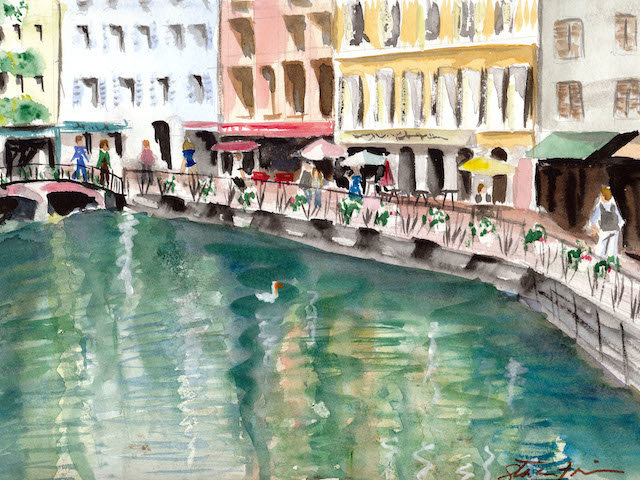 Friedman painted this most appealing watery scene from Annecy, a beautiful region of southeastern France.

Regular readers of the Local will most likely recognize the name Stacia Friedman, who wrote feature articles and a humor column for the Local for a few years as well as for many other local publications and websites and taught Journalism and Magazine Writing at Temple University, Rosemont College and Arcadia University.

Friedman, a resident of Mt. Airy for the last three years and Chestnut Hill for 20 years before that, is the recipient of two Pennsylvania Council on the Arts Writing Fellowships, a Philadelphia Film Festival Screenwriting Award and the Keystone Press Association Award for Excellence in Investigative Journalism, among others.

And I thoroughly enjoyed “Tender is the Brisket,” her 2014 novel about the Sheratons, a Manhattan clan that puts the “dys” in the term “dysfunctional.” The witty but also serious and irreverent novel explores the plight of the Sandwich Generation, “caring for aging parents while figuring out their own identity.”

But up until last month, even I did not know that Friedman is also a supremely talented artist whose work can currently be seen on the walls of LeBus, a 1-year old restaurant at the corner of Ridge and Midvale Avenues in East Falls. (And her “Water & Light” exhibit will be shown at Great Bay Gallery in Somers Point, NJ, June 5-29, where her 25 paintings and prints reflect her love of the Jersey shore. The gallery also shows the watercolors and prints of Chestnut Hill artist Eddie Flotte.)

Friedman was passionate about art from childhood in Wynnewood and by high school was entering and winning art competitions. She earned a BA in Fine Arts from Temple University and did post-grad studies in writing at UCLA and in communications at Temple.

When asked if she was self-taught, Friedman replied, “The only artists who are entirely self-taught are ones who live in caves or jungles. Every artist is influenced by other artists, whether they take classes or not.

“In my case, I grew up in a family of accomplished artists, including my aunt who attended Moore College of Art in the 1930s and my older sister who attended PAFA in the 1960s. At 13, I started taking illustration classes on Saturdays at UArts, even though the minimum age for enrollment was 14. In the past three years, I studied with Howard Watson at Woodmere, Amy Miller at Fleisher Art Memorial and Ann Brennan at Ambler Art Center. Each instructor moved me forward in ways that I never imagined.”

For many years, Friedman concentrating on her writing, but three years ago, she signed up for a watercolor class on a whim, a medium with which she had no experience since childhood. 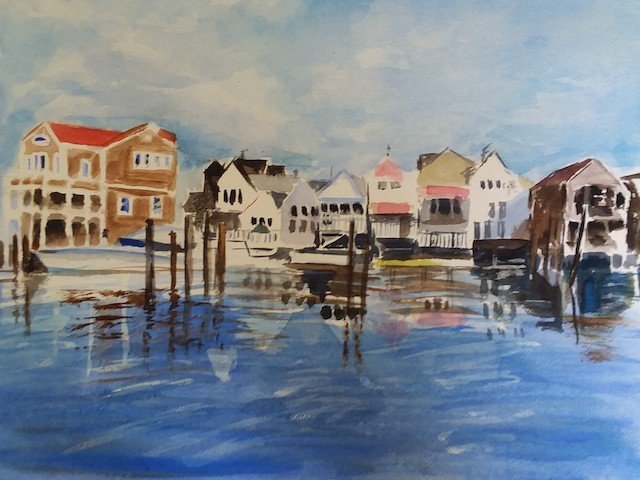 “Margate Bay” is one of 25 works by Stacia in her "Water & Light" exhibit that will be shown at Great Bay Gallery in Somers Point, NJ, June 5-29.[/caption]

“In fact,” she recalled, “I was intimidated by it. Watercolor requires skills I didn't have. Or at least, I didn't know I had! It was like waking up after a coma.

“I rediscovered my love of color and was instantly fascinated by what watercolor could do that no other medium could. I equate the experience with rediscovering a high school crush on Facebook and finding out there is still a romantic connection … I only paint in watercolor now because no other medium conveys as much nuance.”

Not long after she began painting again, Friedman was able to get her work exhibited on the walls of Trattoria Moma, an Italian restaurant in Mt. Airy. Since then she has had a month-long solo show at Ludington Library in Bryn Mawr in December, 2018, and just participated in a show at the Ambler Art Center, May 17-19. In addition to the Somers Point show previously mentioned, her work will be exhibited at ArtSpace in West Cape May, July 29-Aug. 12, and at Rydal Park in Abington in September of this year.

“Writing and painting done well both give me a jolt of adrenaline,” said Friedman. “And in both cases, I often look back at my work and think, ‘How the hell did I do that?’ … When I finish the work and return to my normal self, I am often as astonished by the results as my friends and relatives.”

Since her first show in March of 2017, Friedman said she has had increasing sales.

“Lately, I have sold work directly from Facebook to people I have never met, and my work has also sold quickly at LeBus to people I do not know.”

What was the hardest thing Friedman ever had to do?

“Caring for my elderly mother, who had dementia. But even in the saddest, most stressful moments, there was tenderness and laughter.”

What is the best advice she ever received?

“Howard Watson screaming ‘'STOP!’ at me when I was messing with a painting after it was finished.”

What is Friedman's most impressive characteristic?

“My hair. It is awake even when I am asleep.”

If Friedman could meet and spend time with anyone on earth, living or dead, who would it be?

For more information, visit staciafriedmanartist.com. Len Lear can be reached at lenlear@chestnuthilllocal.com

From Iran, a prescription for fine art in Mt. Airy
Last week my wife and I were sitting in the waiting room of Mt. Airy Family Practice when I could not help but notice a series of beautiful paintings of birds on the wall that were for sale.
West Highland Ave property an example of the ordinary worth saving
It's time to recognize the ordinary in Chestnut Hill. Yes, this community is an architectural museum of extraordinary houses, a green landscape of trees and gardens, a community devoted to the arts; but it's also a place that is rich in the history of the everyday, of work, industry, school, and of things we barely notice.