Whether you’re a Democrat, Republican or even a disinterested third party, you have to admit that there’s something really interesting about Presidential candidate Andrew Yang’s proposal to … 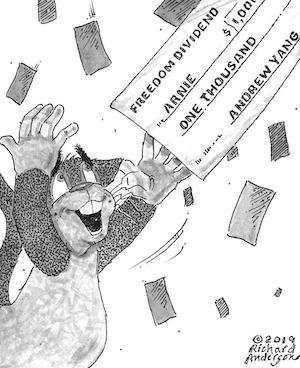 Whether you’re a Democrat, Republican or even a disinterested third party, you have to admit that there’s something really interesting about Presidential candidate Andrew Yang’s proposal to give a $1,000-a-month check to every American. It’s academically called Universal Basic Income. Yang likes to call it a “Freedom Dividend.”

The plan has attracted an understandable amount of criticism and outright derision form both right- and left-leaning thinkers. For the right, which has been warning against addiction to social programs since at least the time of FDR, Universal Basic Income is anathema. For the left, Universal Basic Income is, at best, a politically impossible way to help the poor who would be much better served by targeted and much more popular social programs like Medicare for All or free community college.

I can see some value in both the arguments, and particularly the liberal argument that the best way to help working people and avoid conservative fears that universal income might be squandered would be through targeted programs. But Yang’s proposal is not really about the sort of usual social program policy debates we usually discuss.

Now before I go on, this isn’t a Yang endorsement. Not only because the Local expressly does not make political endorsements, but also because I don’t think Yang is remotely electable. (Though, writing those words is particularly perilous in a post-2016 world.) I’m really just interested in the idea.

Back to the policy question. When you drill down a bit into the assumptions about Universal Basic Income, it really isn’t about finding ways to get more people medical insurance or to send more kids to college. It assumes, rather, that technology is driving us towards a future in which human work is going to soon be obsolete.

The future foretold by Yang and other advocates of Universal Basic Income is one in which automation has replaced many career paths. Manufacturing jobs have already seen drastic reductions in demand. But other work is not far behind. It might not even be long before algorithms designed in Silicon Valley will do a good job at reporting the news or writing this column.

This future reminds me a great deal of Kurt Vonnegut’s first novel, “Player Piano.” published in 1952. The novel imagines a world in which automation and artificial intelligence has put most people out of work. A select group of educated engineers run everything. The novel’s protagonist runs a division of a company modeled on General Electric practically by himself. Those unfit for “engineering” hang out in local bars or work on road crews picking up litter.

It seems like far-out science fiction. Yang has cited technologists who predict that one third of all working Americans will lose their job to automation in the next 12 years. Maybe monthly payments of $1,000 aren’t the best way to address that problem, but something will likely have to be done to avoid a future in which most people suddenly find themselves obsolete.