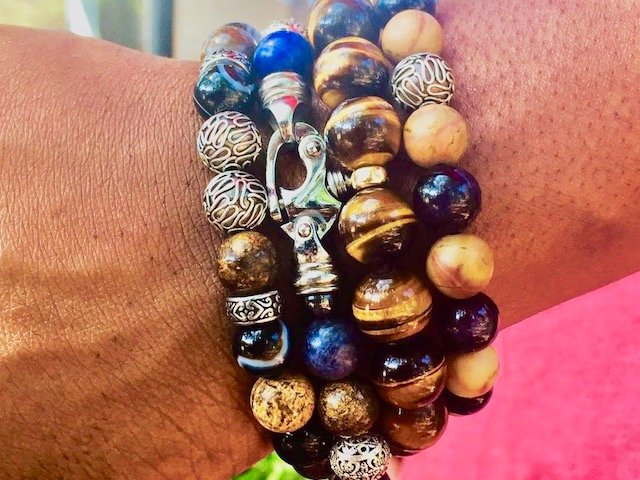 Two years ago Ertell Wigham, a fashionable Mt. Airy native who has been in the pest control business for more than 30 years, walked into the David Yurman jewelry design boutique in King of Prussia, looking for a tiger eye bracelet. He found one that he liked, but he did not like the price tag of $400.

“It was relatively simplistic, so that was just too much money,” he said.

Wigham, 51, who grew up on McCallum Street and then the Alden Park Apartments and attended the Henry School and then Saul Agricultural High School in Roxborough, suddenly had a brainstorm: “Let me see if I can make a tiger eye bracelet myself and save money.”

So Wigham (an English name that has been passed down in his family for generations) went online and found no problem in purchasing beads and stones from Africa, the Middle East, Asia and Russia as well as at bead conferences in this area.

After making the tiger eye bracelet and wearing it, Wigham went into Thomas Pink, an upscale men’s clothing store in King of Prussia, and indicated interest in a shirt, although he lost interest when the salesman pointed out that the shirt was $150. When he expressed his opinion about the price, the salesman said, “If you can afford that bracelet you’re wearing, you can afford anything in my store.”

According to Wigham, “If he thought my bracelet was expensive, maybe I should make more of them and try selling them. So I convinced my wife (a teacher at the Pennsylvania School for the Deaf) to come with me and my bracelets to the Greene Street Consignment Shop in Chestnut Hill. (That was in 2017.) They liked the bracelets and took 10 of them on a Thursday. By Sunday they were all sold, so they took more. All told, they sold more than 250.”

Wigham’s bracelets sell for $25 to $150, which seems like a bargain to me. One customer paid $70 for one and said he resold it for $300. A tailor bought a bunch of them and resold them for much more money than he paid. Isn’t this disturbing to him?

“No,” he said. “I consider that quite a compliment. After all, my name is not Jay-Z or Beyoncé. If it was, I could charge a lot more, but I’m just trying to establish a reputation. The money will come later. I am more jazzed right now about people walking around with my creations than about the money.” 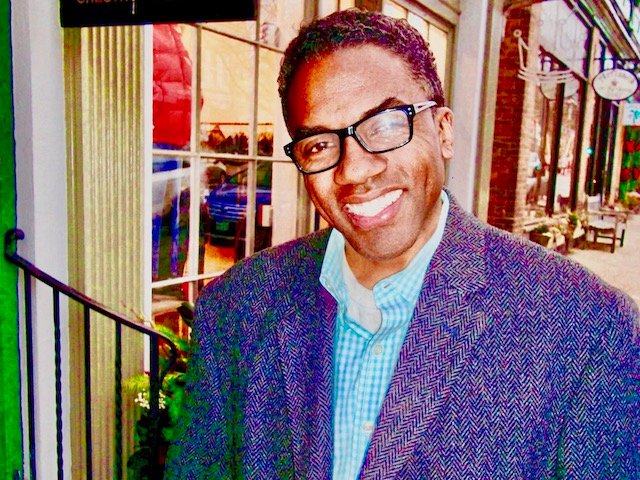 Ertell Wigham, pest control expert and jewelry maker, whose jewelry is available at Style by Blain. (Photo by Len Lear)

“This is an expensive hobby,” said Wigham. “I have learned by trial and error. It may take me an hour to make a necklace, or it may take two days. I have learned things like unity and balance. People like to see patterns; it’s not just random. Each one is different. I work on them early in the morning and the evening since I have a full-time day job. When I go to bead conferences, I really stand out because most of the others who make these are older Asian women.”

Speaking of his day job, Wigham went to the Delaware Valley School of Agriculture and Science after Saul High School and did not graduate but worked for Heyser Landscaping in East Norriton for several years. He has also worked in the pest control business for 30 years and is currently director of operations on the east coast for Pointe Pest Control in Bridgeport.

The recession of 2008 and 2009 ended his landscaping work (“Landscaping is a luxury that many people stopped paying for”) but had no effect on his pest control work because “insects and pests do not care about the stock market or the economy. If you have them in your house or business or in a restaurant or hospital, you have to get rid of them, no matter what it costs.”

Wigham, whose jewelry business is called Black and White Services, now lives in Norristown with his wife, Margaret, and children – Seth, 20, Amber, 18, and Ertell IV, 13. Wigham will take part in a “trunk show” with his necklaces and bracelets at 929 N. 2nd St. in Northern Liberties on Saturday, Nov. 30 from 5 to 8 p.m. Wine and cheese will be served.

Visit BlkWhiSer.com for more information. Len Lear can be reached at lenlear@chestnuthilllocal.com

With the right vision, a rancher could be a good choice

Design for all spaces

Celebrate spring and summer with flowers in new and unexpected places