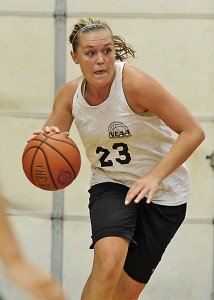 Because of the July 4th holiday at midweek, the NCAA Summer League took off on Tuesday, but the hoopsters were back in action on Thursday evening, when one of the late games featured a pair of previously unbeaten ensembles.

This did not turn out to be a battle for the ages, though, as Mount St. Joe alumna Elle Hagedorn and her Lime Green team took a 32-18 halftime lead en route to a 62-46 victory over Hunter Green, which made the final reckoning a little closer after trailing by almost 30 points.

Lindsay Alexander, a rising senior at Chestnut Hill College, helped lead her Ash Gray team back from a 40-28 halftime deficit to prevail 71-61 over a Vegas Gold squad staffed by West Chester University athletes. Meanwhile, recent Mount grad Bridget Higgins and her Team Gold colleagues made several second-half runs at Kelly Green, but the Kelly club, consisting of women from the University of the Sciences in Philadelphia (USP), won out, 60-52.

In the middle of this hot holiday week one might have expected at least one forfeit due to lack of personnel, but all six games on the slate for Thursday went off as scheduled. It was a testament to the fact that, on the whole, players really enjoy participating in this league, as well as feeling a sense of obligation to their teammates.

The Ash Gray group, which includes several CHC players and Springside graduate Brenna Coll (’11), stayed with Vegas Gold until late in the first half. The Gray only trailed 25-23 with five minutes to go but found themselves down by a dozen at the intermission. Chestnut Hill’s Alexander came to life in the second period, when she netted all of her 13 points for the night, while Da’Kiya Johnson, a guard who is transferring into CHC, scored six points in each half.

Team Gold had suffered from a lack of bench players in the first few weeks of the league, but more were on hand last Thursday. However, when they subbed en masse, it became evident that the starting group was significantly stronger than the reserves. Higgins was among the starters, along with 6’5” Canadian Alexandra Yantzi, a Lehigh junior whose longtime nickname is simply “X.”

The Kelly Green crew would make hay while the Gold reserves were on the court, and the Gold starters would then try to reduce the deficit when they returned to the floor. There was an eight-point spread at halftime, and later, with 11 minutes left to play, Kelly Green led 41-31. Several steals by Higgins helped spark the Gold, which started by slicing three points off the lead. “X” was fouled on a lay-up and completed the three-point play, and next time down she scored off a rebound to make it 41-39.

At that point both teams subbed and Kelly Green extended its lead once more. Gold received a game-high 20 points from “X” and four from Higgins, who spent some of the game playing against Jess Sylvester, a former Nazareth Academy guard whom she’d faced in high school. Another former Catholic Academies player, Carolyn Edwards (St. Basil) scored 13 points for the winners, as did Brianne Traub.

Mount St. Joe coach John Miller was on hand to watch Higgins, and in the late game on the same court he was able to observe another of his former players, Hagedorn. On the roster of her opponent, Hunter Green, Miller recognized two players he had coached against in the PIAA playoffs this year, Cheltenham High School guard Ciara Andrews (bound for St. Joseph’s) and Central Bucks East power forward Lindsey Kelly (Nazareth College).

Upper Dublin High and Swarthmore College graduate Kathryn Stockbower (the daughter of former Chestnut Hill shopkeeper Ann Marie Stockbower) got Hunter Green going with an inside bucket, and a teammate also scored from the paint to make it 4-0. A field goal and free throw by Elizabeth Sharlow pulled Lime Green back within a point, and they quickly jumped ahead for good with three consecutive three-pointers, two by Meg Pearson, and one by Jen Prine.

Andrews and veteran St. Joe’s guard Erin Shields helped Hunter stay close for awhile, but when Pearson popped her third trey it put Lime up 19-12 with eight minutes left in the half. Stockbower (eight points total) got two points back for Hunter, but then the best-known outside shooter for Lime, Katie Kuester, connected on a three and a long “two,” spreading the gap to double digits for the first time at 24-14.

At the intermission, the teams were separated by 14 points, and after Stockbower’s final field goal of the evening cut it to a dozen, the Limeys responded with an 8-0 run. A strong turnout for the game gave them a deeper bench, and Hunter wasn’t able to put together a significant run while the outcome was still in doubt.

With a little over five minutes remaining, Lime led 58-29, and would’ve been up by 30 if not for a missed free throw. Yet another St. Joe’s guard, Shelby Smith, knocked down back-to-back three-pointers to touch off a late 17-4 run for Hunter Green, but the Lime lasses still won by 16.

Hagedorn scored all of her four points in the second half, which is when Dana Mitchell had nine of her 13 and Alicia Manning had six of her eight. Pearson and Sharlow, with nine points apiece, were among 10 different scorers for the winning franchise. Post player Sarah Fairbanks, an incoming St. Joe’s freshman from Lancaster County (Elizabethtown) led Hunter Green with 10 points.