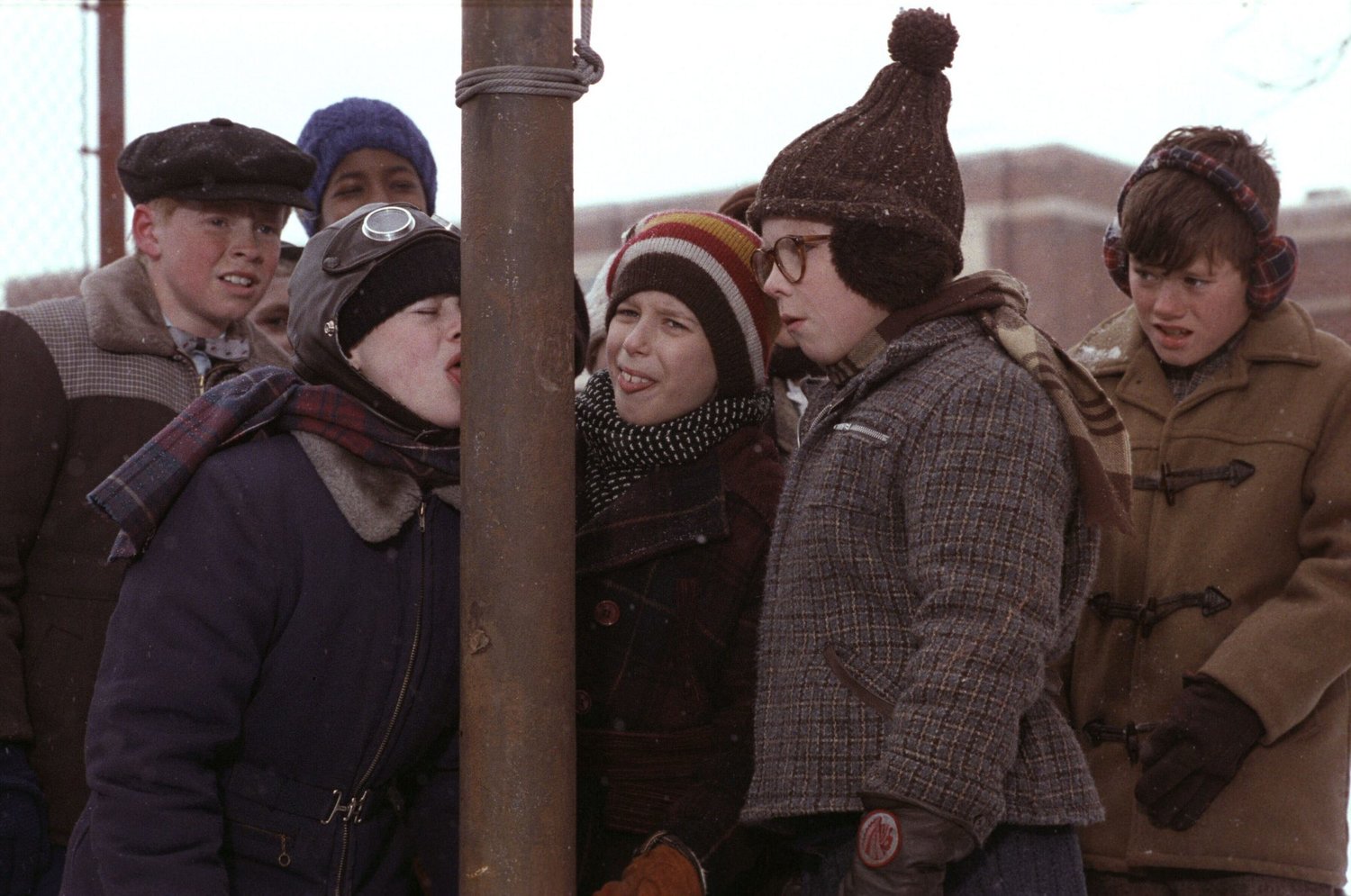 So here’s a six-pack of  even dependable, can’t-miss titles – voted upon officially by the Academy of Me, Myself, and I as good-riddance year 2020 ticks away-- that deliver a truckload of intergenerational joy just in time for Christmas:

“It's a Wonderful Life” (1946)
Frank Capra's indelible and inspirational saga -- a once forgotten movie, believe it or not, before it got rescued when it became a television seasonal perennial --  is about a man saved from suicide by an angel, who proceeds to show him what life would have been like for his loved ones if he had never been born.  It climaxes at Christmas.  James Stewart stars as George Bailey from Bedford Falls, in an extraordinarily dark vision in which the holiday spirit.is nonetheless overwhelming.  Dare you to watch it and cynically dismiss it as Capra-corn.  Moreover, dare you to watch it and not cry.  Come to think of it, dare you to watch it only once.  Told ya.

“A Christmas Story” (1983)
Humorist Jean Shepherd narrates his irresistible memoir of growing up and celebrating Christmas in the 1940s.  It holds up and rewards viewing after viewing after viewing.  Director Bob Clark gets the period details and the nostalgic tone just right, and gets fine, nuanced work from Peter Billingsley as young Shepherd, here called Ralphie Parker, and Darren McGavin and Melinda Dillon as his charmingly ordinary parents.  And be careful with that Official Red Ryder BB Air Rifle: you might shoot your eye out.

“Home Alone”  (1990)
Aimed at kids without disenfranchising grownups, this enjoyably raucous comedy from director Chris Columbus -- about an eight-year-old boy who's accidentally left behind when his Chicago family leaves on a Christmas trip to Paris -- made endearing Macauley Culkin an overnight star as he did battle with, and bested, bungling burglars Joe Pesci and Daniel Stern.  Scripted by John Hughes, it explores the fantasy of a surprisingly self-reliant and pretty much impossibly ingenious youngster with his entire house all to himself and then becomes a slapstick festival in the late going.

“Love Actually”  (2003)
A cheerfully entertaining, R-rated British comedy, the directorial debut of screenwriter Richard Curtis, this ensemble romantic comedy juggles, overlaps and intertwines eight storylines and twice that many principals pursuing and cultivating romantic relationships during the Christmas season.  The array of appealing characters is portrayed by such stalwarts as Colin Firth, Hugh Grant, Emma Thompson, Laura Linney, Liam Neeson, and Keira Knightley, and they get to luxuriate in Curtis's sparkling dialogue as they deliver both laughs and lumps in the throat.

“The Muppet Christmas Carol”  (1992)
Michael Caine's Ebenezer Scrooge is the highlight of this delightful version of Charles Dickens' A Christmas Carol by the Muppets for the moppets.  And everyone else as well.  This was the first time the marvelous Muppets played characters other than themselves -- although someone else had a hand in each Muppet performance.  Director Brian Henson, son of the late Muppets creator Jim Henson, gets fine work from Kermit the Frog as Bob Cratchitt and Miss Piggy as Mom Emily, but it's Caine who's the most able in this low-keyed, heartwarming, humorous, and miniaturized musical movie.

“The Polar Express” (2004)
Director Robert Zemeckis brings the enchanting, award-winning children's storybook to the screen, not in live action and not in traditional or even state-of-the-art animation, but in the "performance capture" process in which actors' live performances are digitally captured and computerized.  The result is a journey of self-discovery one restless Christmas Eve for a boy who questions his belief in Santa Claus and rides a steam train to the North Pole.  Executive producer Tom Hanks digitally morphs into five roles, including the conductor, and motion capture leads to emotion capture in this timeless yuletide tale.

Bill Wine is an Emmy-winning film critic who served in that capacity for WTXF and KYW Newsradio. He lives in Chestnut Hill.

Holidays on the Hill
Flix

Holidays on the Hill is back