Teens in the PA Youth Vote summer ensemble performed their debut forum theatre show on the steps of the School District of Philadelphia. 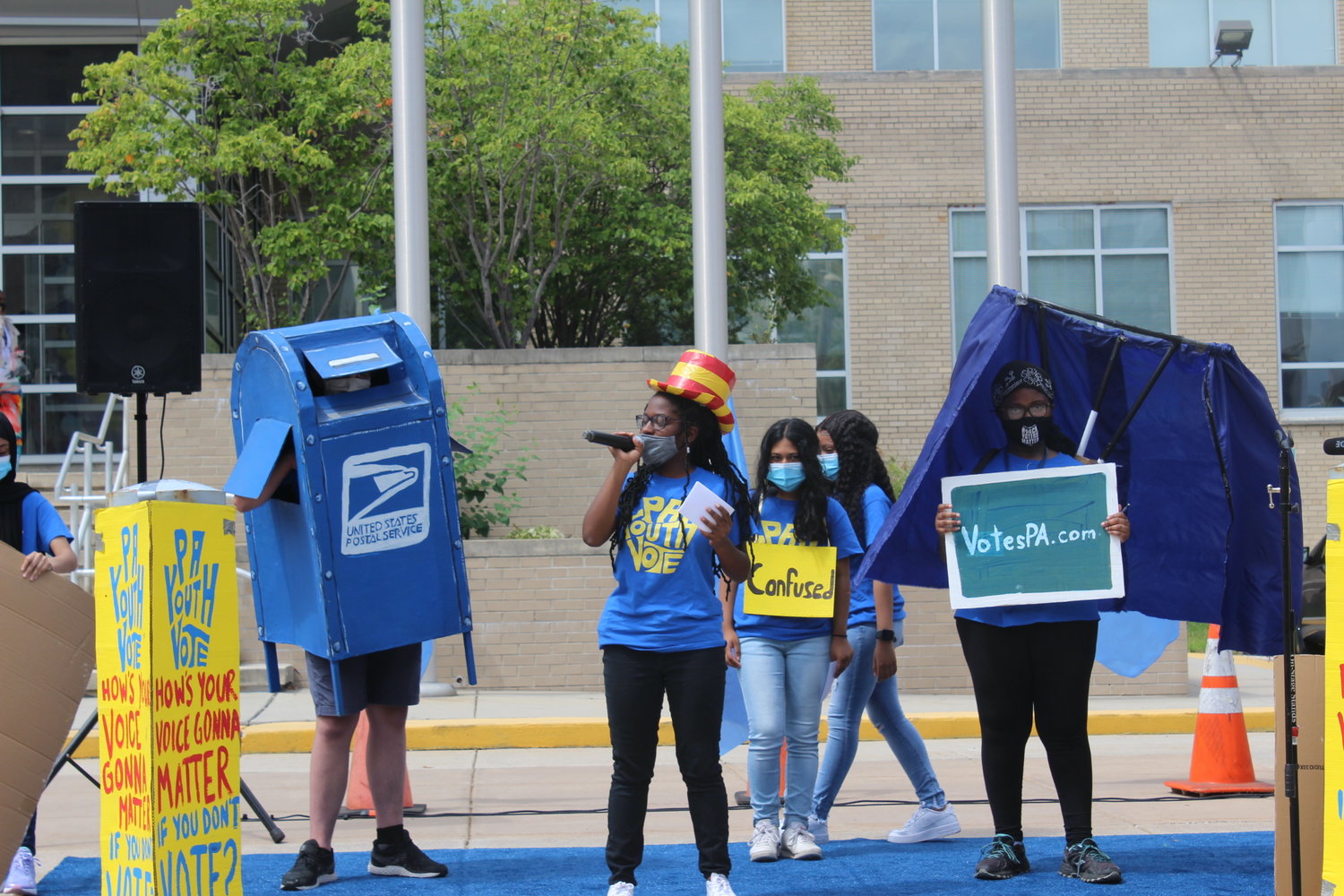 Teens performing with Spiral Q mailbox and polling booth puppets. After the November election, another one of Spiral Q’s mailboxes ended up in the Smithsonian’s National Museum of American History. 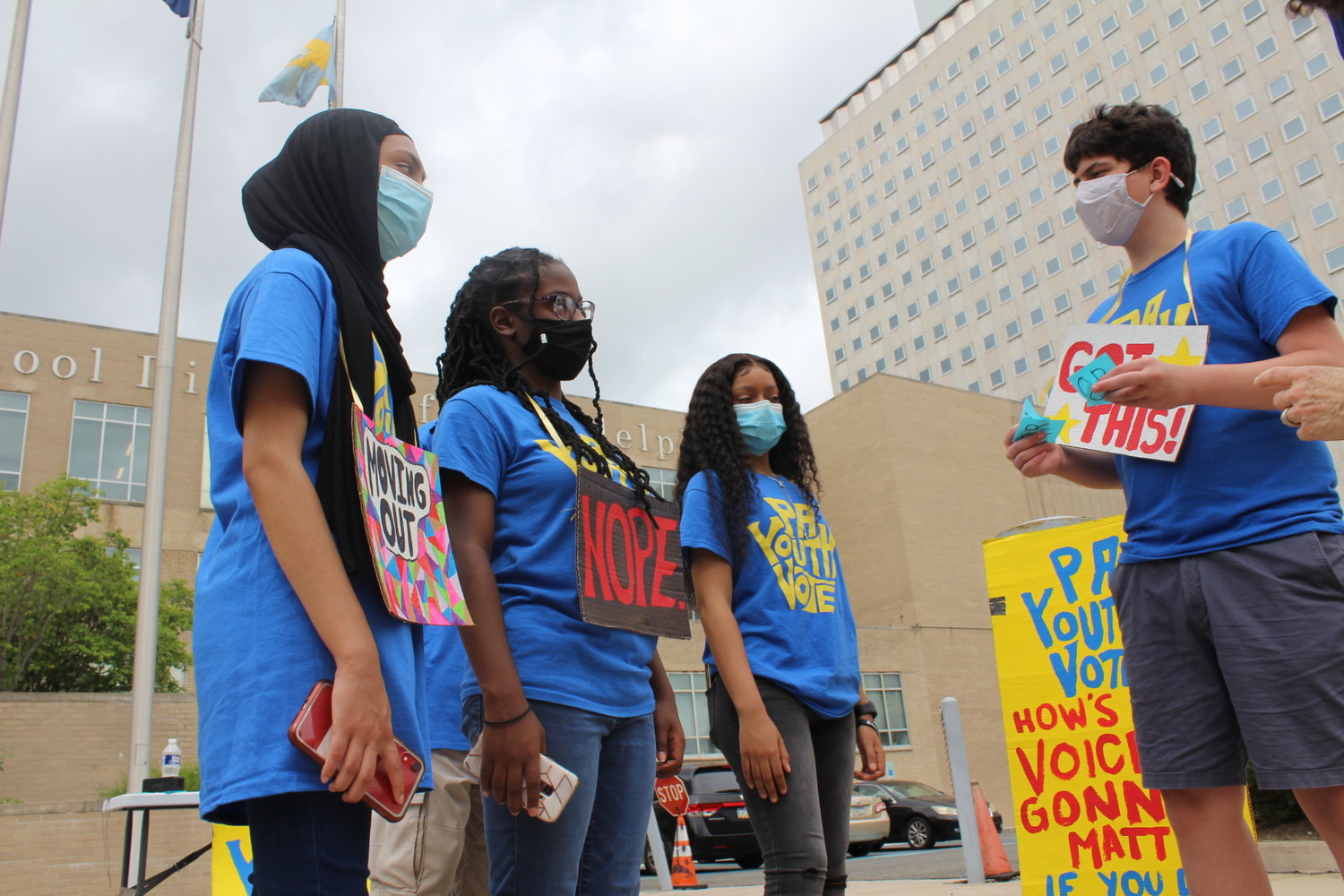 Students in a scene convincing reluctant voters
Previous Next
Posted Wednesday, September 1, 2021 10:00 am
by Tom Quinn

Teens in the PA Youth Vote summer ensemble performed their debut forum theatre show on the steps of the School District of Philadelphia this week. Their three-act play, “How’s Your Voice Gonna Matter If You Don’t Vote,” is a song, a dance, and a call to action to increase voter education and registration in high schools. Members of the Philadelphia Board of Education came out of the building during their lunch break to watch the students perform, and students followed up their act with testimonies at the board meeting later that afternoon.

When people start voting at a young age, they are more likely to stay engaged throughout their lives. Roughly 8,000 public high school students become eligible to vote each year in our City, but actual voter turnout remains low and there is no policy in place to assure that these students are registered to vote at school to have a voice in our democracy.

The interactive Forum Theatre, directed by Lisa Jo Epstein of Just Act, brings spectators into the show as spectators, changing the scene to solve a real-life problem – in this case the problem of reluctant voters, and how to get them to understand the importance of voting.

The play ended with a call to action to audience members to help advocate for school policy change. Five students from the ensemble and the audience testified during the Philadelphia School Board meeting to ask them to pass a voter education and registration policy. Such a policy, the group says, would create the expectation that all high schools “vaccinate students against disinformation,” to become informed voters and civically engaged.

Leonardo Aparicio Lorenzo, a Carver Engineering and Science student, said to the board members, “My parents are both immigrants, extremely busy at work, and haven’t engaged with politics and elections since they can’t vote, so I grew up with a lack of understanding of the politicians that dictate my environment and community.”

Politicians are taking notice of this new bloc of young voters. City Commissioners Omar Sabir and Lisa Deeley, as well as five PA State Representatives visited the theatre set outside the district headquarters before their meet and greet with district officials.

Central student Calvin Macatantan ended his testimony by saying, “In the end this is much bigger than all of us. Quality voter education should be accessible to everyone… to be and lead our future.”

The teens of PA Youth Vote are partnering with Just Act and Philly Neighborhood Networks to ask why their peers don't vote, and then get them to vote! This highly theatrical voter engagement campaign is funded by the Center for Artistic Activism and features interactive performances, famous puppets from Spiral Q, music, dancing, and more, and will be performed at schools, polling places, and everywhere in between through Election Day 2021.

Thomas Quinn is Director of Education for PA Youth Votes. Contact Thomas Quinn to arrange performances or to get involved in promoting school policy change at tquinn@PAyouthvote.org.

Making lots of dough in Chestnut Hill for 30 years
Since 1992, Baker Street Bread Co. and Cafe  has crafted its pillowy, made-from-scratch creations for a hungry audience of residents, restaurants, wholesale customers and catering companies.

Piffaro salutes its founders in Hill concert
Piffaro, Philadelphia’s world-acclaimed Renaissance Band, presented its final series of concerts under the direction of its longtime artistic directors Joan Kimball and Robert Wiemken on May 13-15.
Celebrating Modern architecture in the Northwest
Northwest Philadelphia’s remarkable treasures of Modern architecture are being celebrated in late May at the annual DOCOMOMO-US conference, this year being held in Philadelphia.

MALT’s annual tour of lush private gardens returns
Mt. Airy Learning Tree’s ever-popular annual fundraiser, the Hidden Gardens Tour, is back this year.
Crime Report: May 15-May 23, 2022
Crime report for crimes reported in Chestnut Hill and Mt. Airy for the period from May 16 to May 23.